Cartridge of the Week: The .30-06 Springfield 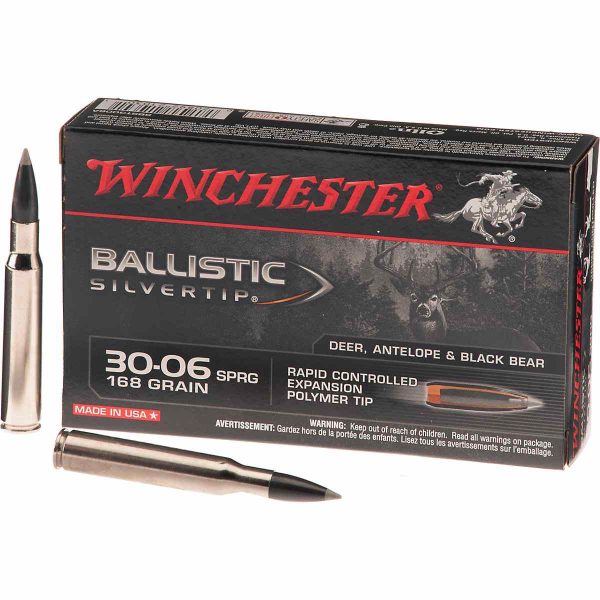 The .30-06 Springfield cartridge (pronounced "thirty-ought-six"), 7.62×63mm in metric notation and called ".30 Gov't '06" by Winchester, was introduced to the United States Army in 1906 and later standardized; it remained in use until the late 1970s. The ".30" refers to the caliber of the bullet in inches. The "06" refers to the year the cartridge was adopted, 1906. It replaced the .30-03, 6mm Lee Navy, and .30-40 Krag cartridges. The .30-06 remained the U.S. Army's primary rifle and machine gun cartridge for nearly 50 years before being replaced by the 7.62×51mm NATO and 5.56×45mm NATO, both of which remain in current U.S. and NATO service. It remains a very popular sporting round, with ammunition produced by all major manufacturers.

In the early-1890s, the U.S. military adopted the smokeless powder .30-40 Krag rimmed cartridge. The 1894 version of that cartridge used a 220-grain round-nose bullet. Around 1901, the U.S. started developing an experimental rimless cartridge for a Mauser action with box magazine. That led to the 1903 .30-03 rimless service round that used the same 220-grain round-nose bullet as the Krag. The .30-03 achieved a muzzle velocity of 2,300 ft/s.

The M2 ball specifications required 2,740 feet per second minimum velocity, measured 78 feet from the muzzle. M2 ball was the standard-issue ammunition for military rifles and machine guns until it was replaced by the 7.62×51mm NATO round in 1954. For rifle use, M2 ball ammunition proved to be less accurate than the earlier M1 cartridge; even with match rifles, a target group of 5 inches diameter at 200 yards using the 150-grain M2 bullet was considered optimal, and many rifles did not perform nearly as well. The U.S. Marine Corps retained stocks of M1 ammunition for use by snipers and trained marksmen throughout the Solomon Islands campaign in the early years of the war.

Commercially manufactured rifles chambered in .30-06 are popular for hunting. Current .30-06 factory ammunition varies in bullet weight from 109.6 to 220.7 gr in solid bullets, and as low as 55.6 gr with the use of a sub-caliber bullet in a sabot. Loads are available with reduced velocity and pressure as well as increased velocity and pressure for stronger firearms. The .30-06 remains one of the most popular sporting cartridges in the world. Many hunting loads have over 3,000 foot-pounds of energy at the muzzle and use expanding bullets that can deliver rapid energy transfer to targets.

Founding Member
Another good pick this week, thanks Talyn

Killed many a deer with 30.06 Remington Core-lokt, 180 gr softpoints. If I do my job they will do theirs every time.
D

Founding Member
I love mine, and never had to look very far for my game after the shot.

It was a devastating round in the battlefield as well. A WWII veteran of the 101st Airborne said that if you hit a man above the belt buckle, he didn't get up.

Founding Member
Good article. I have always liked the 30-06 Springfield. The only rifle I currently have that chambers it is my M-1 Garand.

Thank you.. great / interesting read.. and i learned a few things..