Staff member
Hello all, here is today's article posted on TheArmoryLife.com. It is titled "Pistol Shooting Drills for Combat Marksmanship" and can be found at https://www.thearmorylife.com/pistol-shooting-drills-for-combat-marksmanship/. 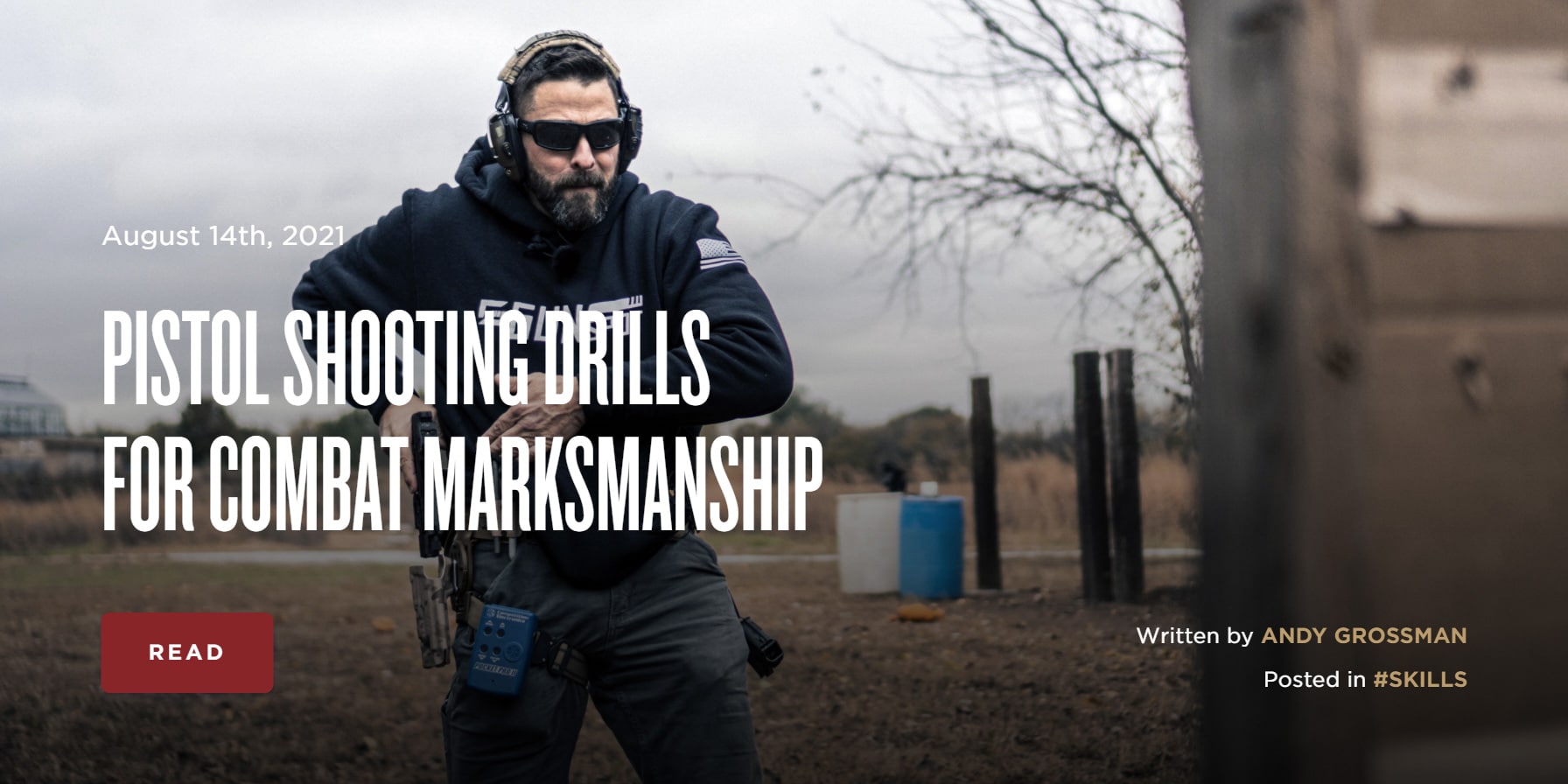 Mike H. said:
Hello all, here is today's article posted on TheArmoryLife.com. It is titled "Pistol Shooting Drills for Combat Marksmanship" and can be found at https://www.thearmorylife.com/pistol-shooting-drills-for-combat-marksmanship/.

Great drills.
I do a varying method of some of those already. Will have to do this approach.

I've been doing most of these. My instructor calls them by different names or just explains the drill without calling them anything.

Good article, and I appreciate having the drills all in one article for future reference.

Unfortunately, at our local indoor range, most are a No No with the the range rules, but hey, adapt and improvise.

Bemused Berserker said:
Good article, and I appreciate having the drills all in one article for future reference.

Unfortunately, at our local indoor range, most are a No No with the the range rules, but hey, adapt and improvise.
Click to expand...

i do drills from the low ready. Hold your pistol low over the front edge of the indoor range bench to achieve the lowest possible, safe, starting point. Semi-sorta simulates a draw as best you can w indoor range rules.
I also avert my head and eyes to focus downward. I come up with my focus and the pistol at same time to engage the target.

if w a buddy, have them move the target between 3-5-7-10 yards while having your eyes straight down. Have them tell you which target circle to shoot as they say “ready, Blue circle” or “top right circle” as you come up on target. RO can be helpful in this if a slow range day for them as well

after running the drill slow, with range rule firing pauses between rounds fired, ask the RO if you can double tap based on the target training. Most, I say Most, ranges will allow you to run the rapid fire portion if they see you are a very competent shooter with your rounds on bullseye consistently.
B

Thanks Killer Ford. Appreciate your adaptations and I will certainly try those. Indoor range rules and drills do create conflicting practice.
T

Most indoor ranges, for public shooting sessions, will not allow drawing from the holster or rapid-fire (and as @KillerFord1977 noted, double-taps/hammer pairs - or even controlled pairs - can be up for debate) - but instead of seeing this as being less-than-optimal for your draw-and-shoot or rapid-fire/close-distance defensive shooting practice, consider re-framing those limitations, instead.

To begin with, a quick question: when you are at home, do you always wear a holster, or are you mostly or even just occasionally without a holstered weapon on your body?

If so, then being able to confidently and efficiently come up to-target from the indoor-ready, low-ready, or chest/"high"-compressed ready* (or even retention) can be just as important a skill as it is to draw the pistol and to bring it to-bear on the target. Think about it even more, though, and one quickly realizes that if he/she were to be actively engaged in CQB, then it is rather less likely that the engagement will occur from the draw, versus from these ready-positions.

[ *Note that care will need to be given to muzzle-orientation to stay within range rules: SUL, high-port, as well as other muzzle-aversion indices may not be possible. ]

Similarly, where range-rules stipulate "no rapid fire," and that successive shots may take place no faster than within ~1 second, we can again alter our training goals -and even our outcome measures- to match.

For example, in the canonical Hackthorn/Vickers "The Test" (aka the "10-10-10"), the shooter starts from the draw and attempts 10 shots on a B-8 Repair Center at 10 yards, with the goal of completing it in 10 seconds. Typically, the metric is one of score versus time, where when scores are the same between two shooters, the one that comes in at the lower time "wins." At a range with rules restricting drawing from one's holster as well as prohibiting rapid-fire shots, the shooter can instead start the drill from a ready-position that does not violate range-rules, or even pick up the gun from the shooting table/bench (again, a good skill to practice for the home/hotel environment), and could aim to discharge the 10th round at precisely the moment the shot timer rings the 10-second par time (since most audible shot-timers will not function well to register the shooter's string at noisy -or even outdoor- ranges).

An example of how this may play out the in the real world can be seen when we take a look at the following incident analysis published just yesterday by Claude Werner: 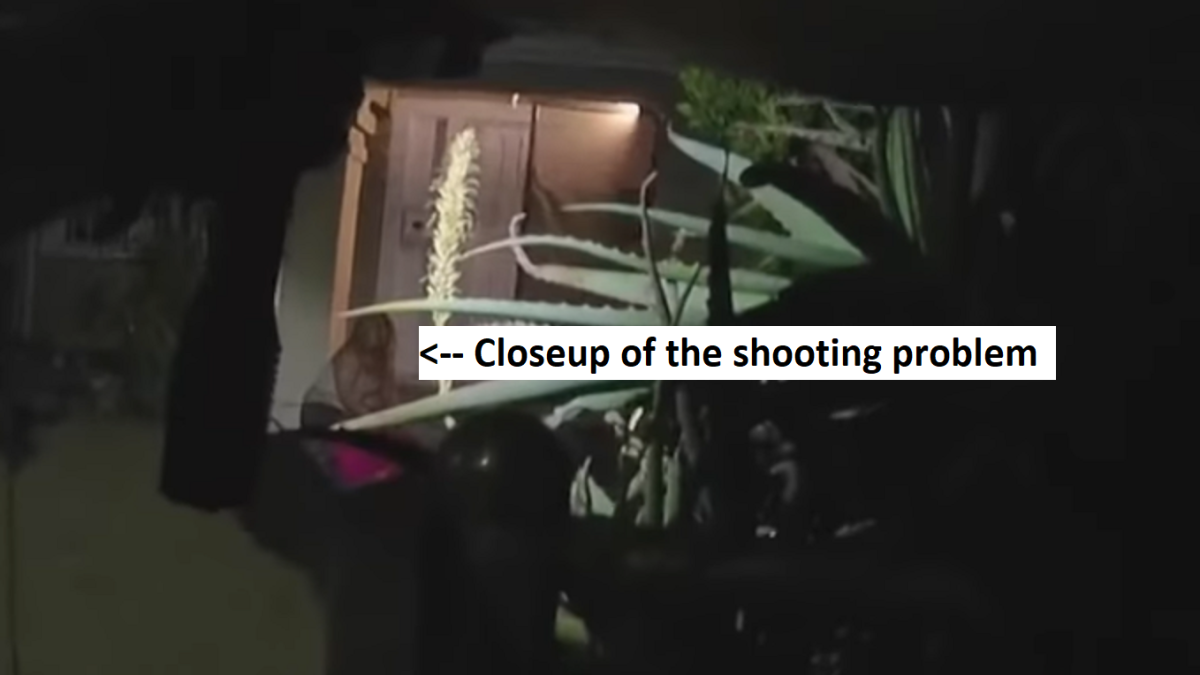 Body Worn Video (BWV) not only has value for analysis of Use of Force, it also can be used as a shooting analysis tool. By looking at a BWV in conjunction the results of a subsequent investigation,…

One could utilize the one-second-per-shot pause to simulate a rapid assessment of the threat in-between follow-up shots...or to even insure a better sight package - which, as Werner pointed out (the latter he tied back to the infamous Gramins/Maddox shooting), are considerations that "Officer A" likely would have benefitted from.

All this, of-course, is not to suggest that one shouldn't practice shots at rapid cadences, at-cyclic, but rather that we should both realize that not all defensive shoots require a "NSR" of shots in rapid succession in order to successfully shut-down the threat, and that we can even utilize range-limitations to our advantage.

The gunfighting tenant of "speed up when you can, slow down when you must" actually adapts very well to the limitations that are common today at indoor public ranges, if we only use a bit of our imagination sometimes, to re-orient our favorite fast-and-furious drills.
Last edited: Aug 19, 2021
B

Thanks TSIWRX. Main limitations at our range are only be able to draw from the 3:00 belt position, movement, and staying in the lane. Movement laterally is a no, movement back and forth towards or away from the target is only about 4 feet.
Big thing is, we're all recorded 24/7. So even going in off hours when you've the place to yourself, you don't dare break any of the limitation rules, as they'll catch you.
No restrictions on rate of fire, but fully automatics aren't allowed. I've a binary trigger on one AR that I'll drop a 22 conversion to use. The board, rightly, ruled that it wasn't fully auto. Centerline rifle is a no go, because the ballistic curtains aren't rated for rifle (22's are fine).

I've family property I can go to for shooting rifles and drills, but it's a couple hour drive to get there, so it ties up a whole day. So it's not as convenient as the local indoor range (only a mile from my house). Now that gas is $4/gallon, my trips out of town will be fewer and farther between. Of the two outdoor ranges, one has a 4 year wait on membership, the other is priced too high for my budget.
So yeah, all we can do is adapt and work mental drills.
T

^ That's actually not bad at all for an indoor range!

And I hear ya about the ancillary costs (time-distance as well as fuel, time off work, etc.) of training. That's the real deal-breaker for those of us who have to live in the real world and aren't independently wealthy!
T

And I wanted to come back to drop something that I just saw this morning on my FB feed....

^ That's obviously the flip side of my argument above - sometimes, it's about more than just that one shot.