Show off your Every Day Carry!

Staff member
Founding Member
My most comfortable pistol to carry IWB. Ruger LC9s contractor yellow (aka the killer bee)with spare mag and Muddy River Tactical water buffalo holster. I have the same gun in black also but I don't carry it. 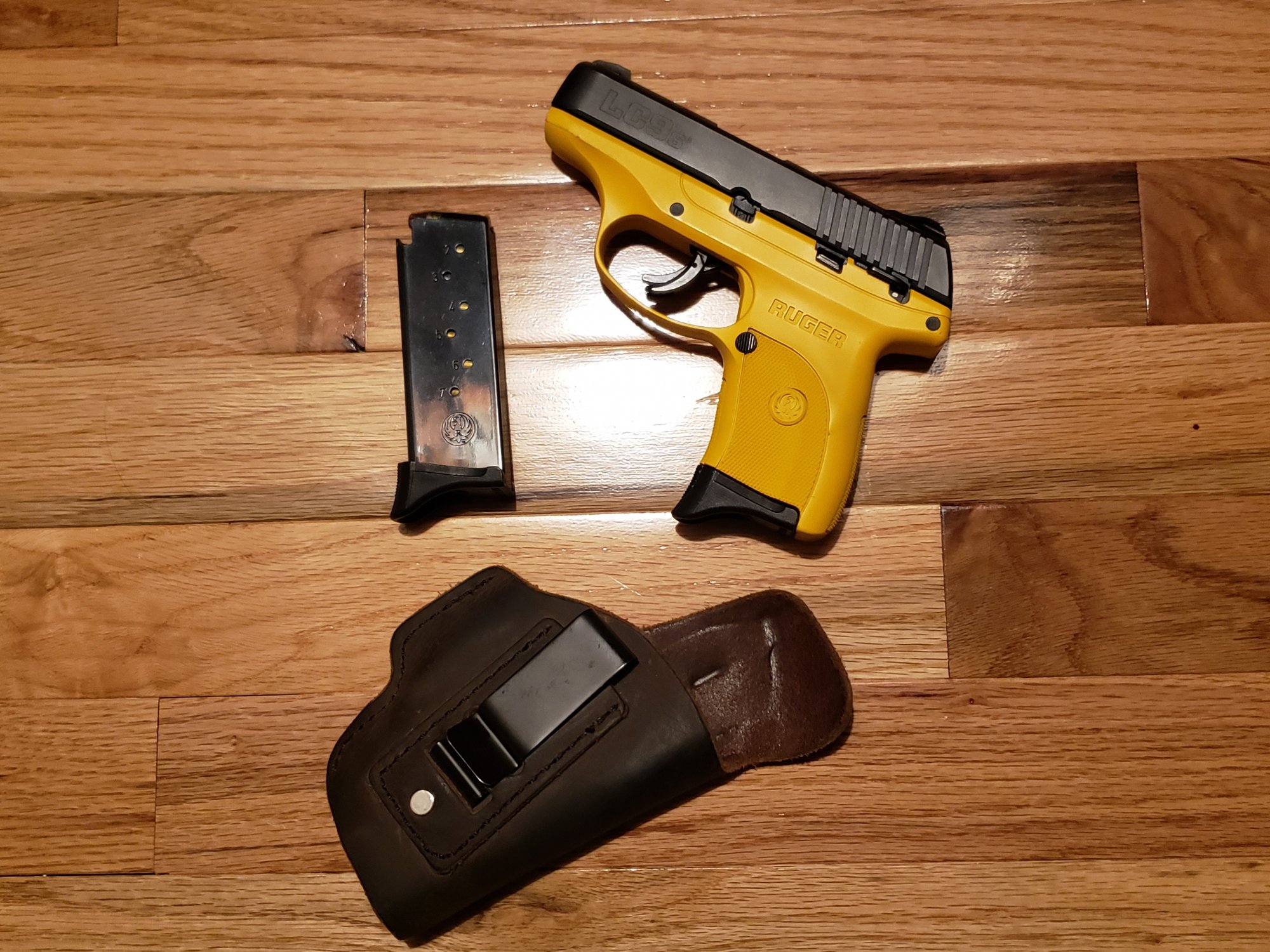 My favorite most comfortable carry is my xd mod 2 subcompact in 45. 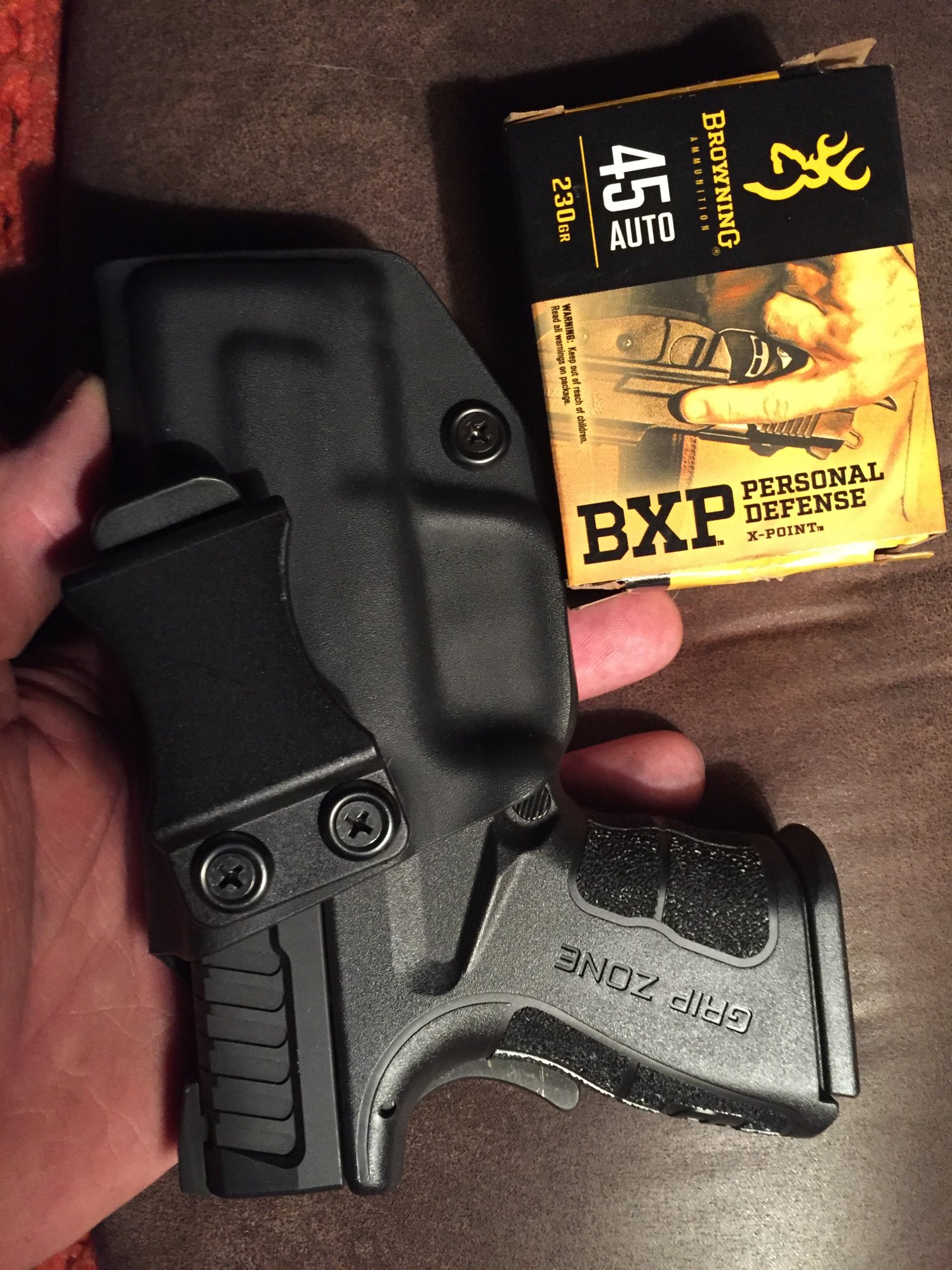 Founding Member
Plus my phone, which in this case is being used to take the pic.

Founding Member
Here is mine until my Hell Cat comes in. 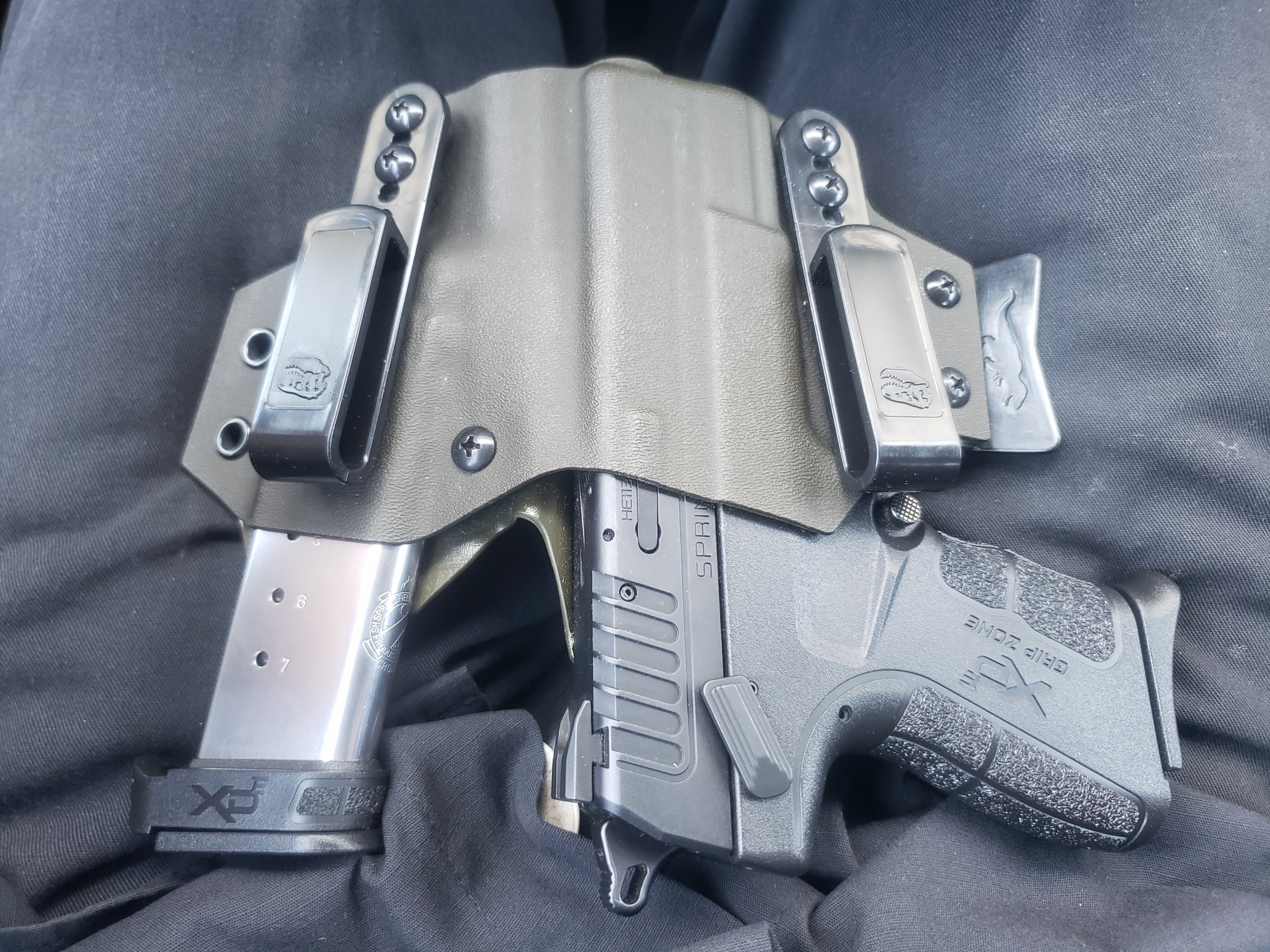 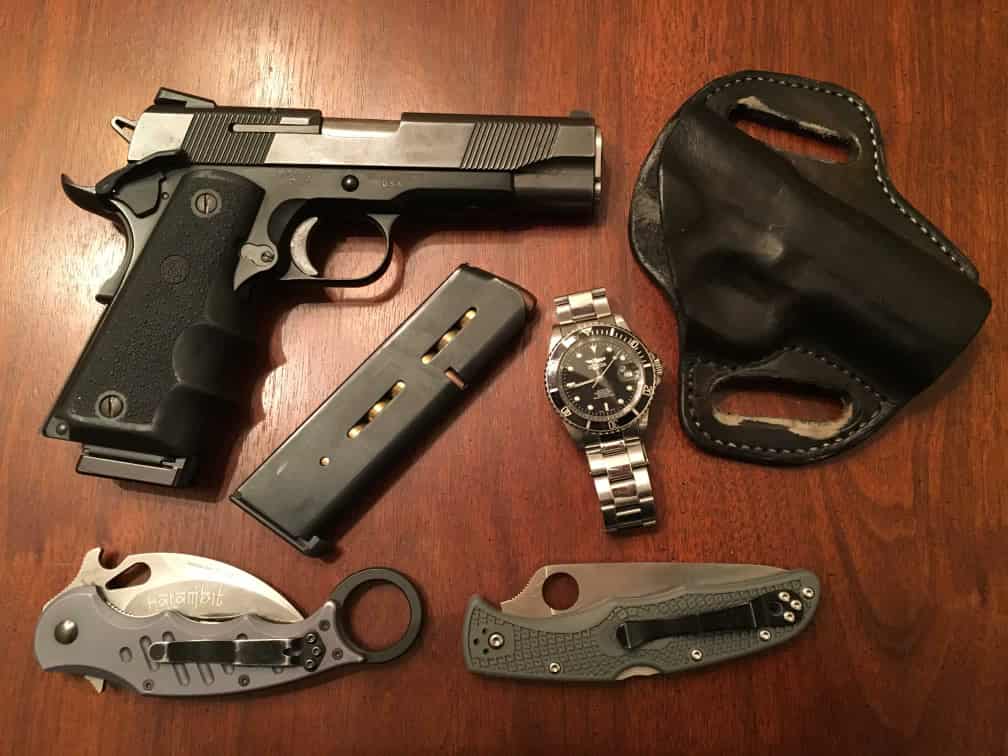 A smith and Wesson scandium .45 commander style with sfs system. I Always carry a spare magazine, I always carry two knives, a spyderco for work, a karambit for two legged snakes. 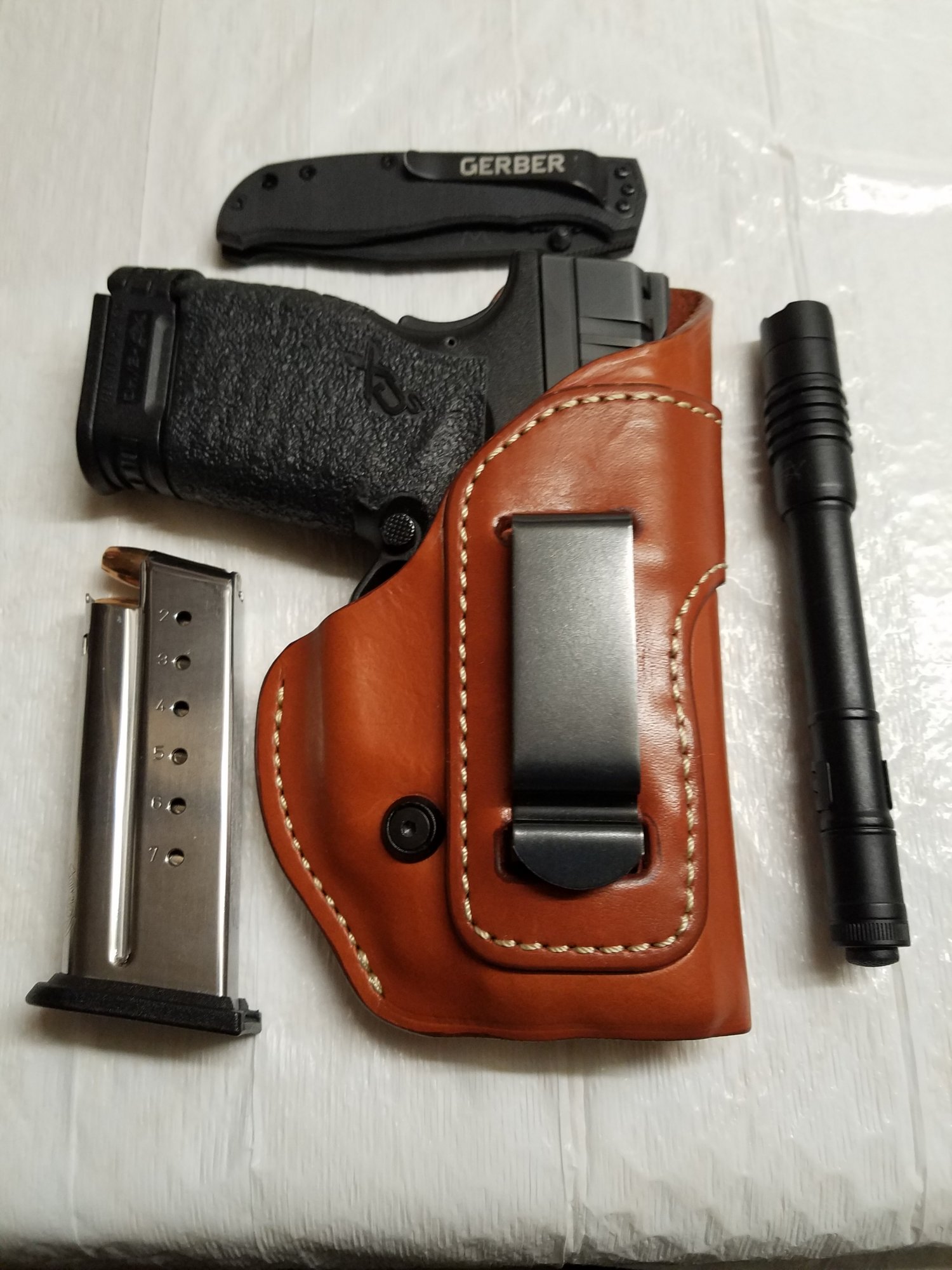 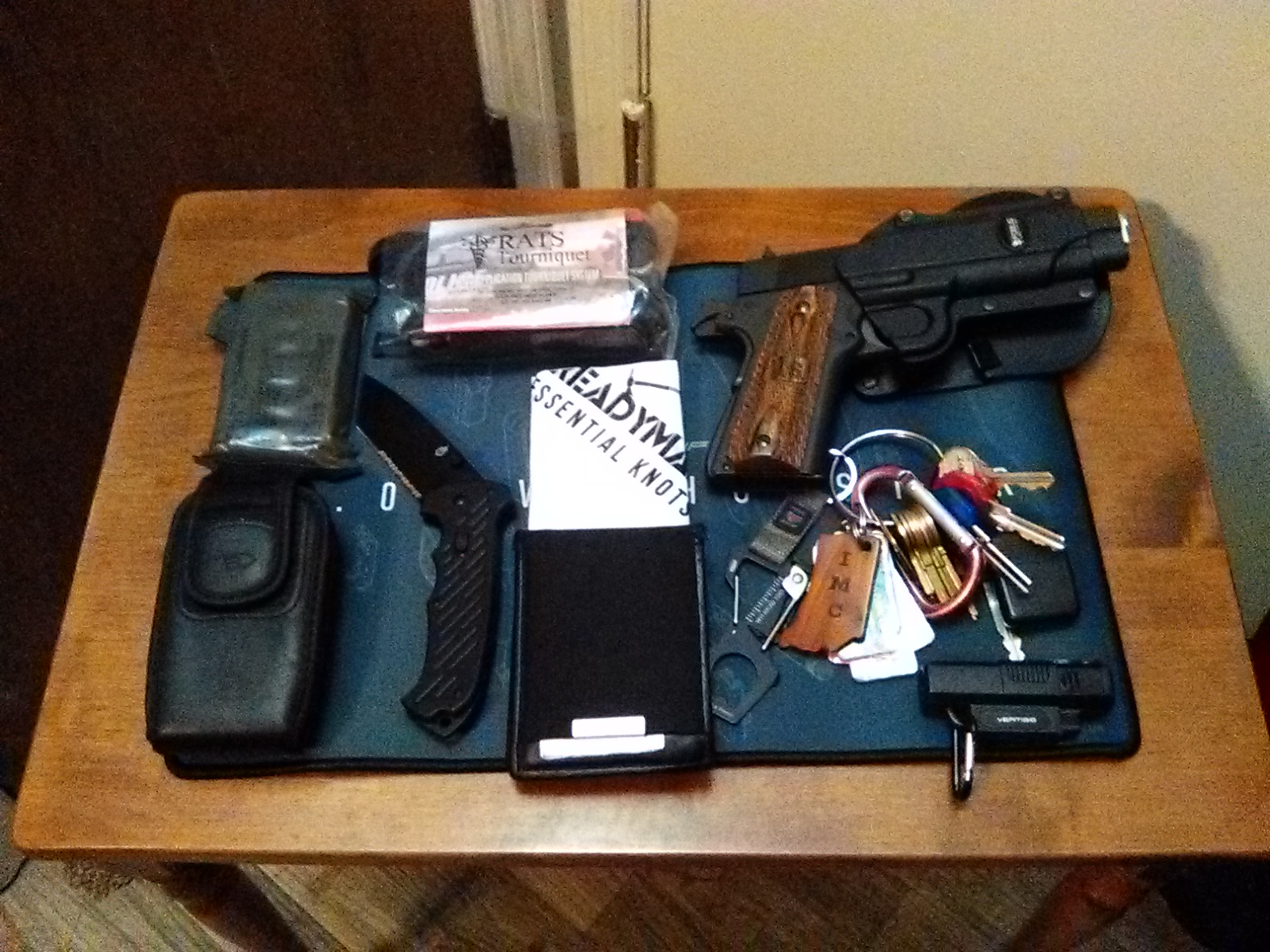 The gun mat is the Alien Gear Holsters 4.0 design.
J 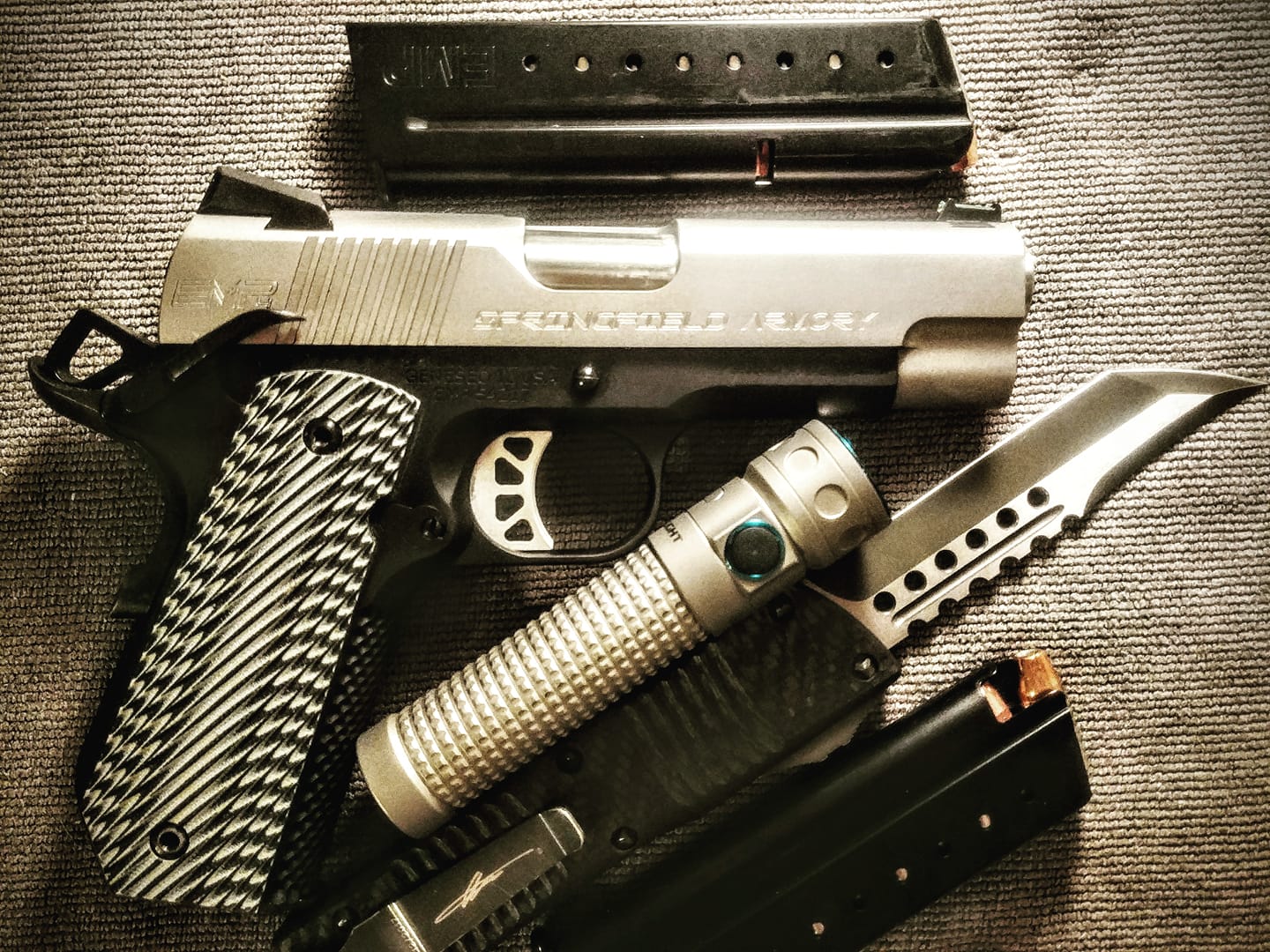 Founding Member
My RDC (Random Day Carry):
XDS 9, Alien Gear 4.0 IWB, CRKT Squid, plus truck keys, and phone. IFAK in the truck. Pistol stays home locked-up if I'm headed to school for grandkids, or hospital. Other miscellaneous stuff would include ballcap (all seasons), chapstick (all seasons), and a couple bottles of water (all seasons also). 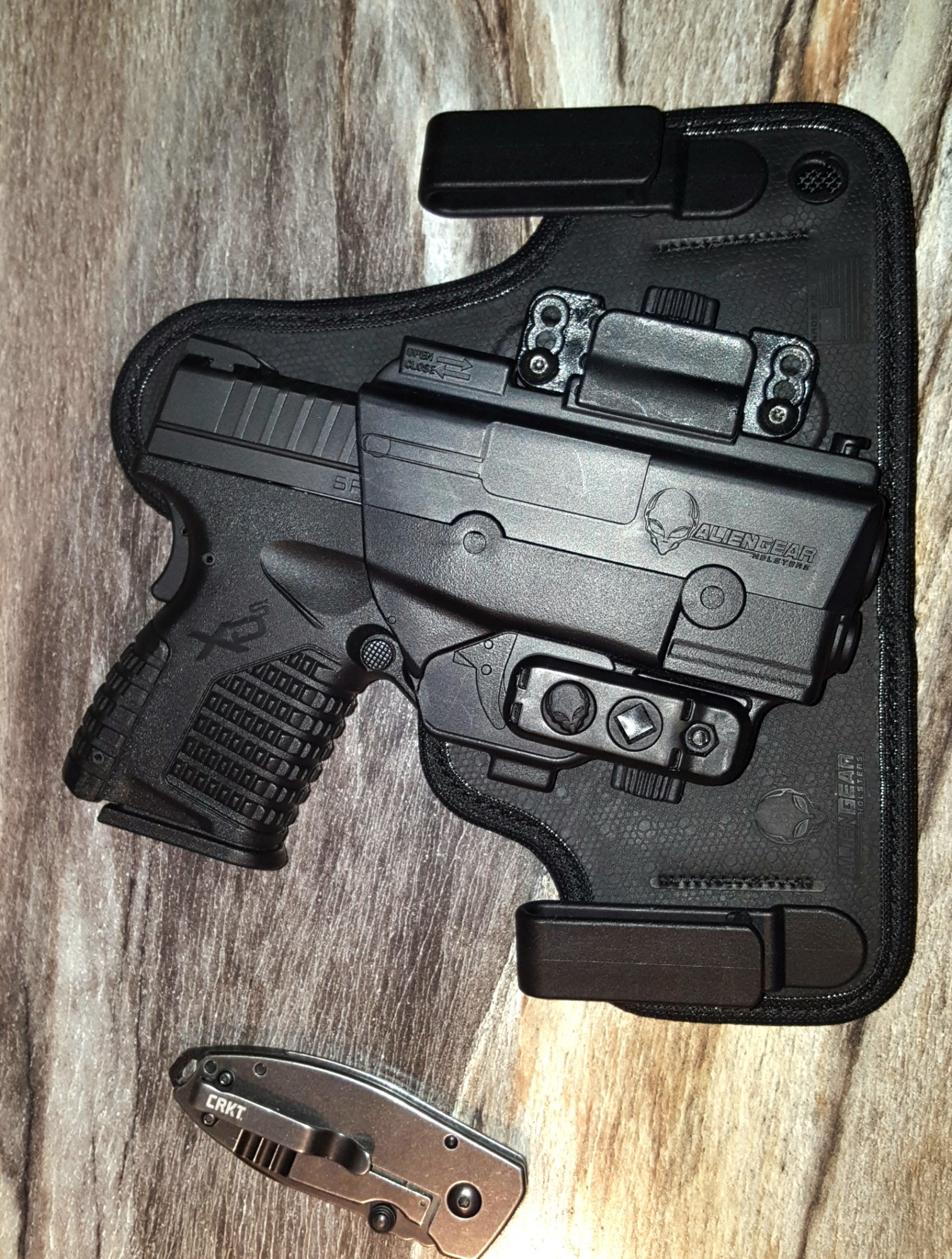 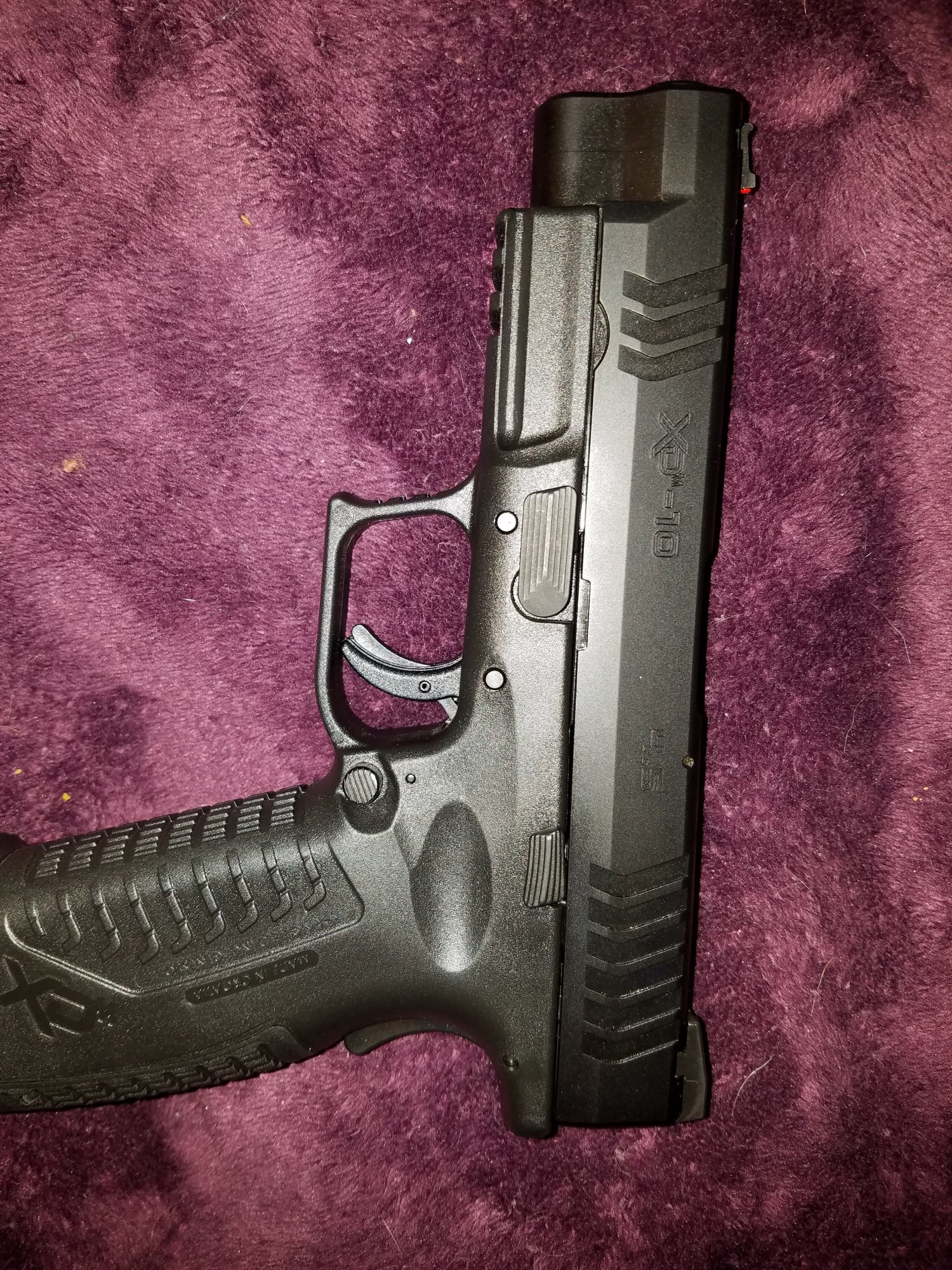 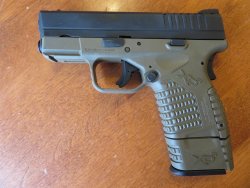 MsMelissa said:
Tagua Holster. I like it a lot. The leather is very nice. I attached the link if you want to check it out.

MsMeliisa, I was thinking about getting one of those as well. How long have you used it? Is it comfortable? 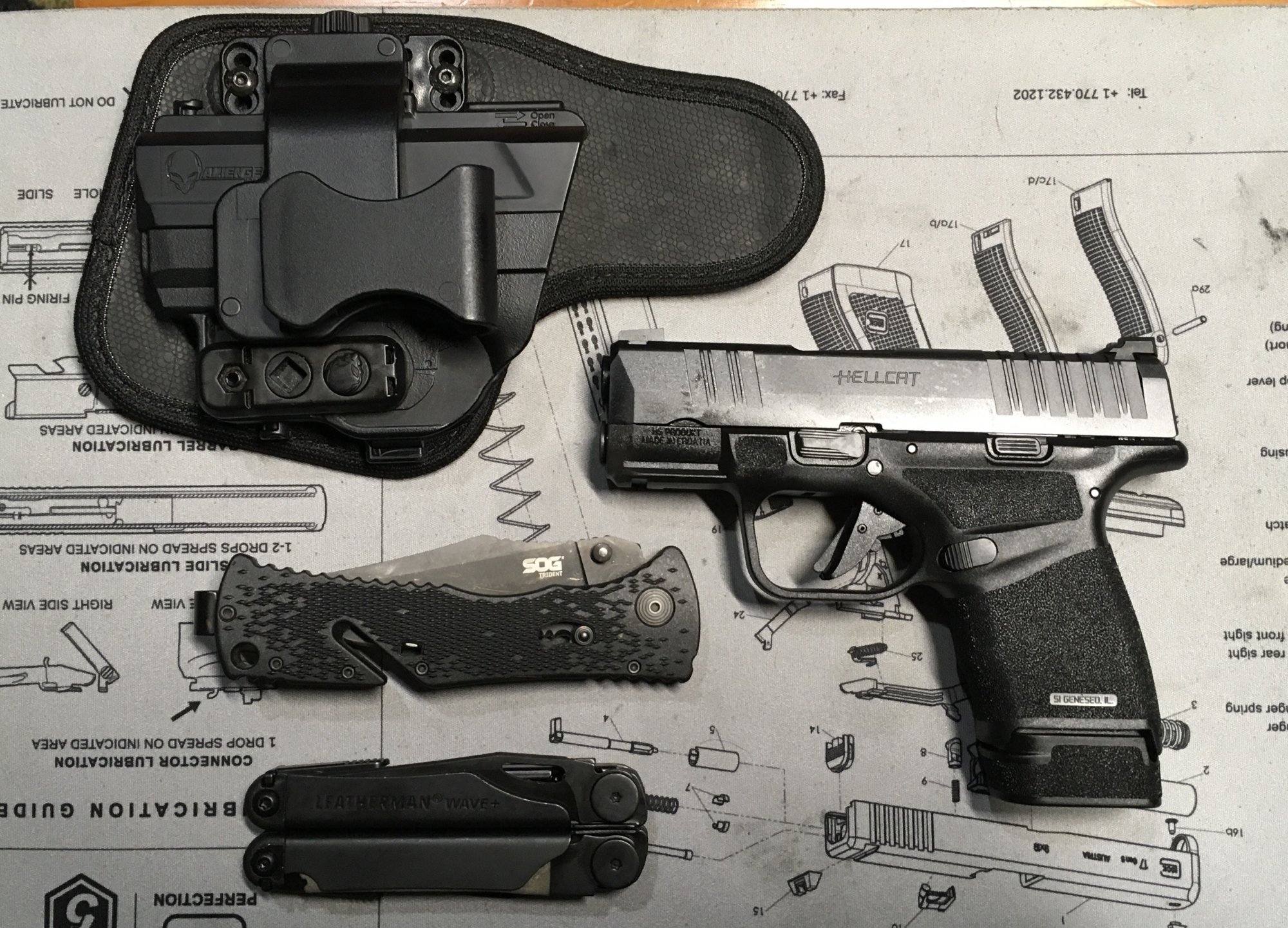 The phone/wallet line on the left versus the multitool/med pack on the right denotes the split in terms of what I carry on my support (left) versus dominant (right) side.

In my right front pocket, I carry a couple of admin/task-lights since I'm a nerdy flashlight nut.

Besides that, it's also nice to be able to have a couple of small task-oriented lights that won't raise any eyebrows. The Big-i-Design LED-equipped Titanium Pocket Clip is a great way for me to carry my keys because my car is on a "Smart Key," so I don't have to pull it out of my pocket all the time.

The multi-tool is in the little watch-pocket because in one of the earliest classes I shot from-concealment, I found that with the tool clipped at the rear of the pocket as what most folks typically do, with how I wear the type of shirts I wear daily, I'd occasionally catch the shirt on the clip, launching the tool out of my pocket or end up fouling the draw. As for why the two different tools - it's just that one gets much more use than the other, that's all.

In my right rear pocket, I carry a MK6 OC, which is indexed in-situ by the mini med-kit that I also shove in that pocket. If I need to access the meds in a hurry, the OC popping out is not a real issue, so the two live happily together. The Adventure Medical kit has the form factor that I like, with actual pockets, so it's what I've used for the past few years. I've modified its contents to better suit my needs, though. Instead of what came from the factory (https://www.adventuremedicalkits.com/trauma-pack-pro-with-quikclot-swat-t.html), I've substituted a pack of Combat Gauze for its clotting sponge, and kept only the SWAT-T and gloves in order to make room for a chest-seal (HyFin Vent) and a small "boo-boo" load-out with Band-Aids, Moleskins, and Advil/Tylenol/Immodium/Benadryl in a Titanium County Comm A/B Cache. A couple of $20 bills stuffed in the back of the boo-boo items also comes in handy as emergency cash.

Of all of my stuff, I honestly find that I'm most thankful for having the small boo-boo items at-the-ready. Not a week goes by when I don't "rescue" someone with something that I carry here.

Threaded under my belt is the C-A-T. This location is somewhat of a compromise for me as I wanted to maintain ambidextrous accessibility without adding bulk to my overall profile (and because ankle-carry is non-tenable for me (https://www.thearmorylife.com/forum/threads/looking-for-compact-trauma-kit.273/#post-4691). I'm slightly behind the power-curve here because it takes me 30 seconds to achieve "hemostasis" with the TQ, at this position, but at least this allows me to acceptably carry a TCCC recommended TQ..... I tried a few different marketed "flat" TQ carriers such as the PHLster Flatpack and the Lunar Design SwiftTQ (which I still use, albeit as an OWB TQ carrier for training classes), but they all bulged the TQ too far out on my waist for "polite company."

I elect to carry my wallet at the left rear for two reasons. The most practical/realistic is because should I have to declare to the authorities that I am armed, I want to use my other hand to reach for my identification. The more mall-ninja reason is because I'd like to think that if the situation was truly that desperate, I would make a play for my gun while using my support hand, with the wallet, to distract: I've gamed this out a few times in force-on-force, and had varying success - so yes, it's a desperation play.

Jumping up front on the left, before you ask, yes, I actually *have* taken several shot-from-concealment handgun courses with my iPhone in its clip-on carrier. As with every other piece of gear I carry, I like to vet my stuff (and pressure-cook it, if-possible), and the phone carrier is no exception. No, it won't survive combatives, but that's not really the point, at least with this piece of gear.

In the front left pocket is my trusty Zippo: I don't smoke, but there's a million and a half reasons for someone to want to carry a reliable firestarter. "Reverse clipped" to the inboard corner of this pocket is the Waved Delica, which I've carried for the last 6 years. I'd like a fixed-blade or even a larger folder, but Ohio's patchwork knife-laws are a nightmare, and this keeps me on the good side of it. Waving the folder is something that I've been used to since I started fancying Emersons in the early-oughts, and I've been able to validate technique in a few integrated combatives classes in that time. My main light is either a Surefire LX2 or their EDCL2-T: the former has the perfect high/low combination for my workweek use, but I switch out to the much more powerful EDCL2-T either when I go out after dark or during the weekends. The light is clipped on the outboard hem, inside the pocket, of-course.

The EDCL2-T is a nice compliment to my EDC's XC-1 as this WML completely lacks throw and is really only good as a close-range "white-waller." The EDCL2-T's throw - while less than that of what it replaced in my loadout, the EB2-T - and sheer power (I do get more usable corona/spill with the EDCL2-T versus the EB2-T) thus makes for a great pairing. (I carry the LX2 for workdays as its low output feature much better matches my needs at work - at which I cannot legally carry my firearm, anyway).

I think this EDC load-out reached its current format some time around 5 to 6 years ago. Aside from updating the light and adding the OC two years ago, I haven't changed it. I really like consistency, which I feel reinforces my ability to access and use those items during critical times.

Finally, with respect to the holster, it's been self-chopped with a Dremel and wheel-smoothed a bit, to shave away excess and reprofile hot-spots that came as a result of those modifications. I like to carry IWB at the 2:30 on my dominant side - kinda between appendix and strong-side hip - so one of my criteria is that I need to be able to take a knee and accomplish a simple "get away from me!" front-kick/stomp with it, and these modifications work towards those goals, as well as comfort when seated/driving. I also changed the front clip to a Comp-Tac GripHook, to increase holster-to-belt retention capabilities.

And towards this last, I must admit that I have yet to be able to vet this holster in the crucible of integrated combatives, on the mats. But for the time being, I am comforted by the fact that it is very difficult to pry the GripHook off of my belts (Ares Gear Enhanced Rangers).
Last edited: Feb 1, 2020
You must log in or register to reply here.
Share:
Facebook Twitter Reddit Pinterest Share
Top