What Nearly Being Gutted in a Parking Lot Taught Me

Staff member
Hello all, here is today's article posted on TheArmoryLife.com. It is titled "What Nearly Being Gutted in a Parking Lot Taught Me" and can be found at https://www.thearmorylife.com/what-nearly-being-gutted-in-a-parking-lot-taught-me/. 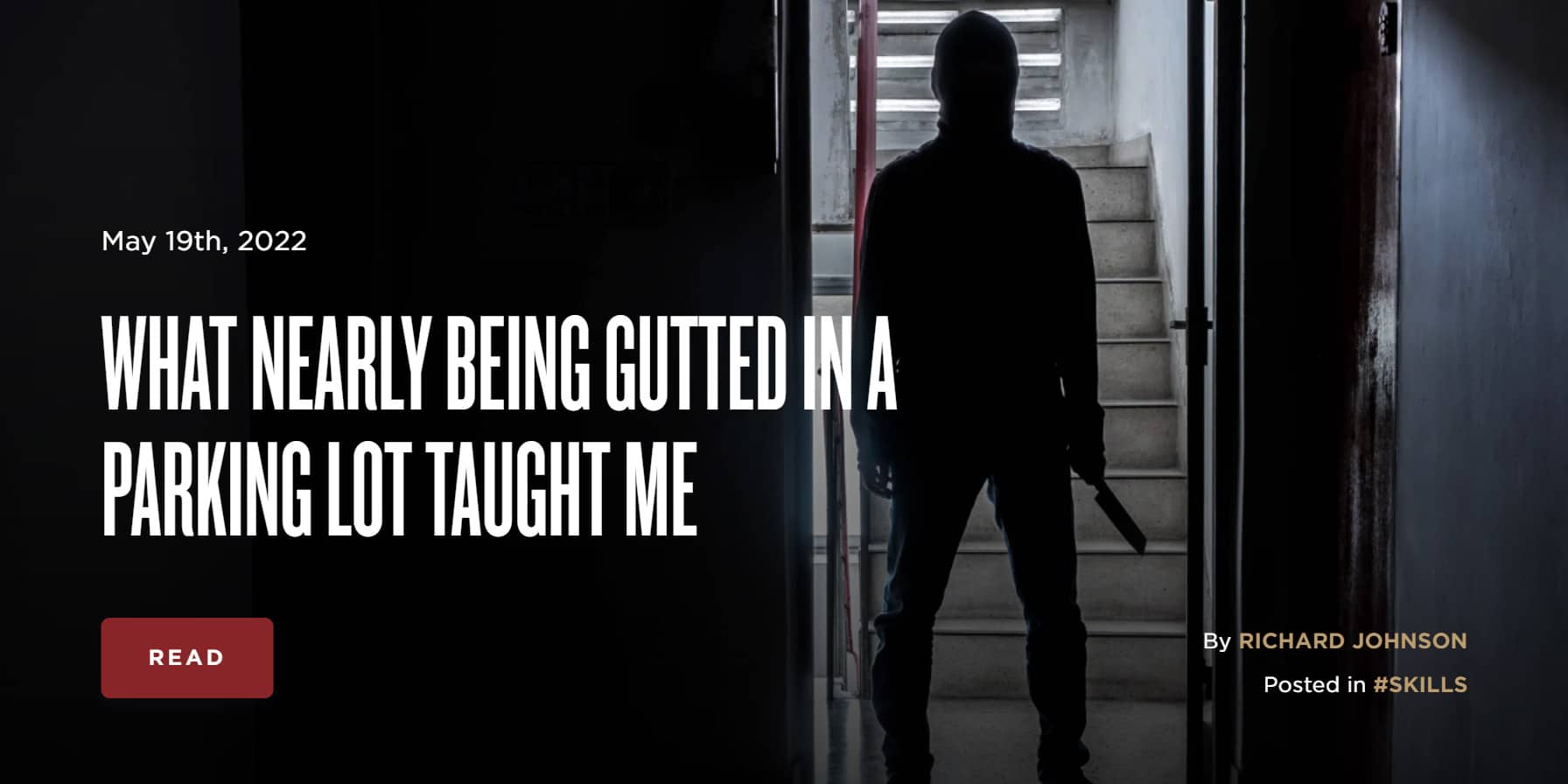 This is a pretty concise and informative article. I don't think there's anything to add to it.

The only minor point of contention that I would have I would never consider the parking lot of a supermarket a safe place.

Founding Member
Good article, Mike. Thanks for the link!
G

Great article.
A group of us once arrested a fugitive after chasing him into his bedroom. We wound up tackling him and rolling around on the floor and bed in an attempt to cuff him. He kept trying to get off the bed and was very strong, with short muscular arms that we couldn’t get any leverage on. Luckily there were several of us there and we eventually cuffed him. After we got control we realized he was fighting his way towards a machete he had concealed on the side of his bed. If there hadn’t been a bunch of us there I would have lost that fight…

The Night Rider said:
This is a pretty concise and informative article. I don't think there's anything to add to it.

The only minor point of contention that I would have I would never consider the parking lot of a supermarket a safe place.

Supermarkets are watering holes and parking lots are transitional spaces
Click to expand...

I know all to well about supermarket parking lot’s. You think there safe because of the amount of people coming and going, in today’s climate the criminal crowd is everywhere.

Good article. Thanks for the info. Knives can be very deadly and difficult to defend against.

The related articles listed at the bottom of this article appear to be worth reading.

Mike H. said:
Hello all, here is today's article posted on TheArmoryLife.com. It is titled "What Nearly Being Gutted in a Parking Lot Taught Me" and can be found at https://www.thearmorylife.com/what-nearly-being-gutted-in-a-parking-lot-taught-me/.

If I saw a guy like that...I'd say OK and turn around ASAP.
C

Great example for others to learn from as I too had that moment of clarity within the first year as well. Mine was the Low-Slung swivel holster of the day, prior to the safety holsters all LE should wear. In addition, I had been trained with the Lamb Method for use of a baton that places the firearm between you and the suspect. Although it has it's use in say a correction setting, I always felt it was risky and although voicing that opinion, you fight as you train and that was what they were going to train.

First determined suspect from a fender bender, dove straight for my sidearm and got a pretty firm grip as I was attempting to retain control. Grabbing a handful of long hair and locating a chrome Dodge bumper placed me back in control.

The Lamb Method was relegated to the wrong tool bin and never used again as a Street Officer. I had the pleasure to arrest him again a few months later, for armed robbery. He didn't fight me this time and the holster had been changed out for a Shumaker safety holster if he had. But the sidearm was already out of the holster and pointed at his head with a glint in the eye of do you really want to... It was for armed robbery, thus, he thought better.

Dangerous out there and even with 98% of the people just living their lives, the 2% can be hardcore and resent you more than you know,