Staff member
Hello all, here is today's article posted on TheArmoryLife.com. It is titled "Single-Point Sling: Pros and Cons" and can be found at https://www.thearmorylife.com/single-point-sling-pros-and-cons/. 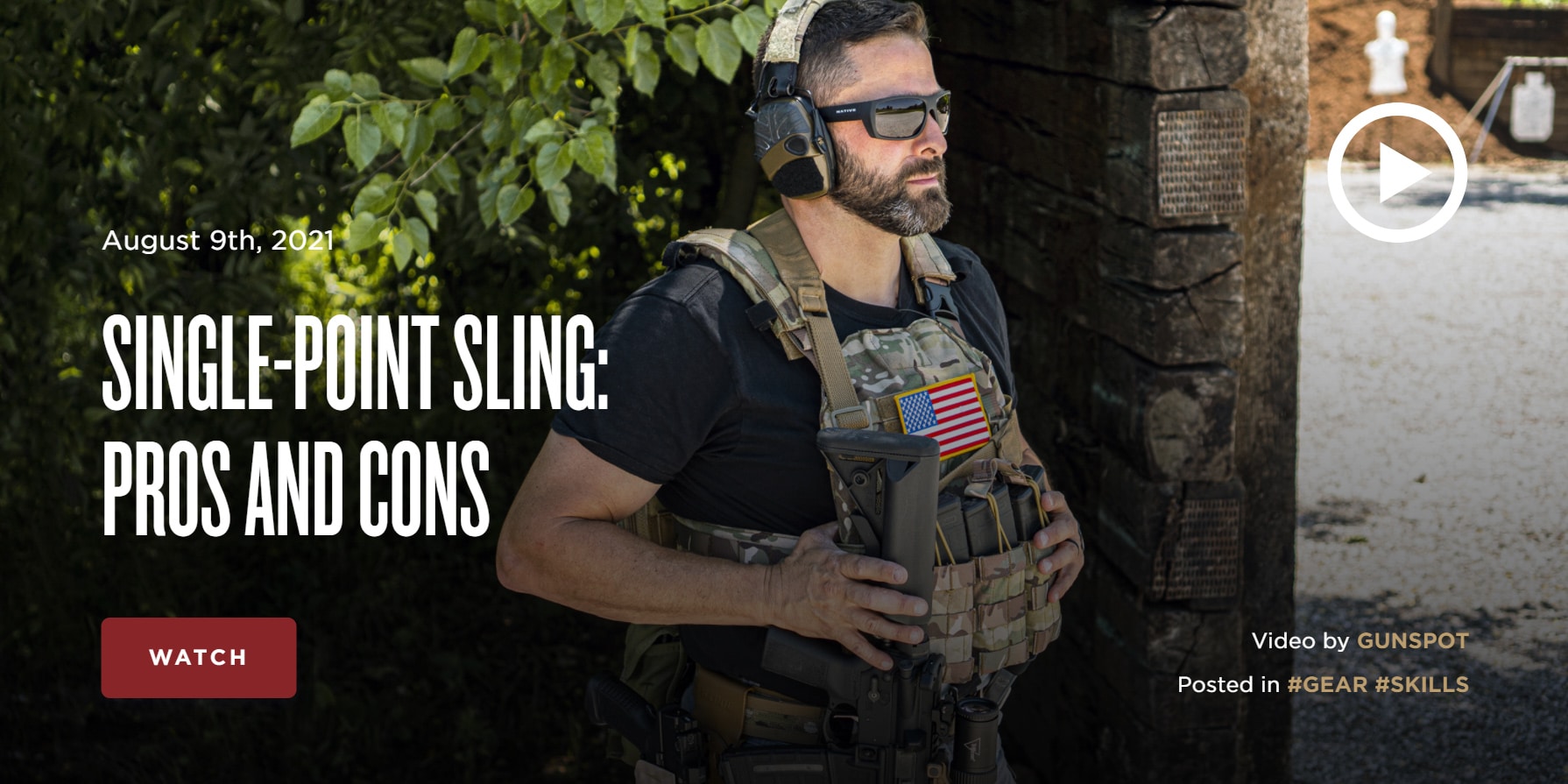 A couple maufacturers add-on items for slings to do the same with other sling brands.

A couple maufacturers add-on items for slings to do the same with other sling brands.
Click to expand...

I generally run BFG padded Vickers on everything. I only put the Magpul on the little guy because I use that sling like an anchor point. It’s adjusted so when it’s at the end of its travel the buffer tube pad rests right against my cheek. To me it’s far superior to using a brace.
On a full size rifle or shotgun I would never go single point.
T

Talyn said:
A couple maufacturers add-on items for slings to do the same with other sling brands.
Click to expand...

I'm currently exclusively two-point, but I run the IWC 2-to-1 Triglide on all slings, too, just in case I ever had the need to go to single-point.

I started down this path with single-point slings on my long-guns. But in-retrospect, I think that was because of just how awkward I was with a sling, period. Never having had any kind of training with long-guns (being neither military nor LE, or in any such related field/industry), I found a sling rather awkward to work with, even as I understood its importance in long-gun employment. Driven by this awkwardness, the single-point became the path of least resistance, but it didn't take me long to come across several shortcomings of the system, as they applied to my specific usage of the long-gun.

As I continued to take training classes and with self-guided practice, I found that for my needs as an average civilian-Joe type, a two-point offered much more convenience -and even comfort- versus the single-point, and that's what drove my switch-over.

That said, it did take me a while to become comfortable with using a sling: and towards that, I'm, to this day, still learning about it's ins and outs.

Founding Member
The 2-to-1 Triglide is what I was thinking about. I have one on a sling.
T

Talyn said:
The 2-to-1 Triglide is what I was thinking about. I have one on a sling.
Click to expand...

^ Link for those who are looking.

This is via IWC's direct website - buyers should note that prices may be lower at their favorite retailers, and also that they OE special-markings variants such as those for Viking Tactics (VTAC), if you are interested in sporting some different graphics.

To nut punch or to not? Pros and Cons.
There. I fixed it. You’re welcome.

I've heard people make convincing arguments for single point and 3 point slings, but I personally have no use for them other than the single point in the aforementioned capacity. And even then I don't think I use it how most people do. Shooting from the right I put my right arm through the sling and it hangs around my neck on the left and under my right arm. My sling is adjusted to get to a single specific point and that's it. It hangs nowhere even close to my jewels ( it actually hangs under my right arm and could be concealed under a long coat if necessary) and in fact is set up so not only does it provide a crucial anchor point for an unbraced pistol, but it makes it possible to carry it slung behind me with a 2 point holding a shotgun laying across my chest. The single point sling also provides an easy way to hang the gun off a hook for fast access in a HD situation. This application aside I wouldn't use it for anything. I am extremely comfortable with the regular, typical 2 point sling set up.

Founding Member
I like the option of switching back & forth between 1 and 2 point with a sling capable of that with a shorter barreled AR and a PCC, but anything heavier 2 point is the way to go for me.
Last edited: Aug 9, 2021
T

Bassbob said:
I've heard people make convincing arguments for single point and 3 point slings, but I personally have no use for them....
Click to expand...

^ I'd like to learn from some of the SMEs of those days-past why they invented -and took to- the 3-point, and what made them go away from them.

The one thing that I've learned about slings -from being so awkward with them and thus seeking a lot of instruction about its use- is that a lot of the sling's physical setup as well as its features depends heavily on the preferences of its designer.

The VTAC, for example.

In my earlier days of trying to get used to slings, this was among those that I purchased and used with my gun in multi-day training classes. I got it much like I got many others (BFG/Vickers, Magpuls [so many permutations, over the years], SOB, Ferro Concepts, SIERRA TAC, TAB Gear, etc.) because it's among the ones that are very highly regarded: a "standard," if you will. I would use one or the other of these slings in a few classes, to see what I liked and didn't like about them...rinse and repeat.

At one class, I lamented on the positioning of the lock-release on the VTAC, and the instructor asked me if I'd ever trained with Kyle Lamb (he wasn't trying to put me down with this question: I know this instructor well and consider him a friend, and he also knows that I try to get out to train with as many other instructors as possible). I replied that no, I had not - to which he said "ah, and that's why." This instructor then demonstrated to me and the rest of the class why the mechanism was placed where it was on "Kyle's" sling, and why on his (this instructor's) preferred sling, it is placed differently.

With the three-points, what I hear of folks on the SME-level who have used them -typically with the compact submachine guns- is that even on such small weapons, that extra strap tended to get in the way more than it helped with weapons manipulation. That said, I've never received instruction on how they were supposed to be used, nor have ever seriously used them.... which is why I'd like to try.

Mike H. said:
Hello all, here is today's article posted on TheArmoryLife.com. It is titled "Single-Point Sling: Pros and Cons" and can be found at https://www.thearmorylife.com/single-point-sling-pros-and-cons/.

No one wants to fight from the "racked" position - bingo!