Staff member
Hello all, here is today's article posted on TheArmoryLife.com. It is titled “CCW Steel: Carrying the SA-35” and can be found at https://www.thearmorylife.com/ccw-steel-carrying-the-sa-35/. 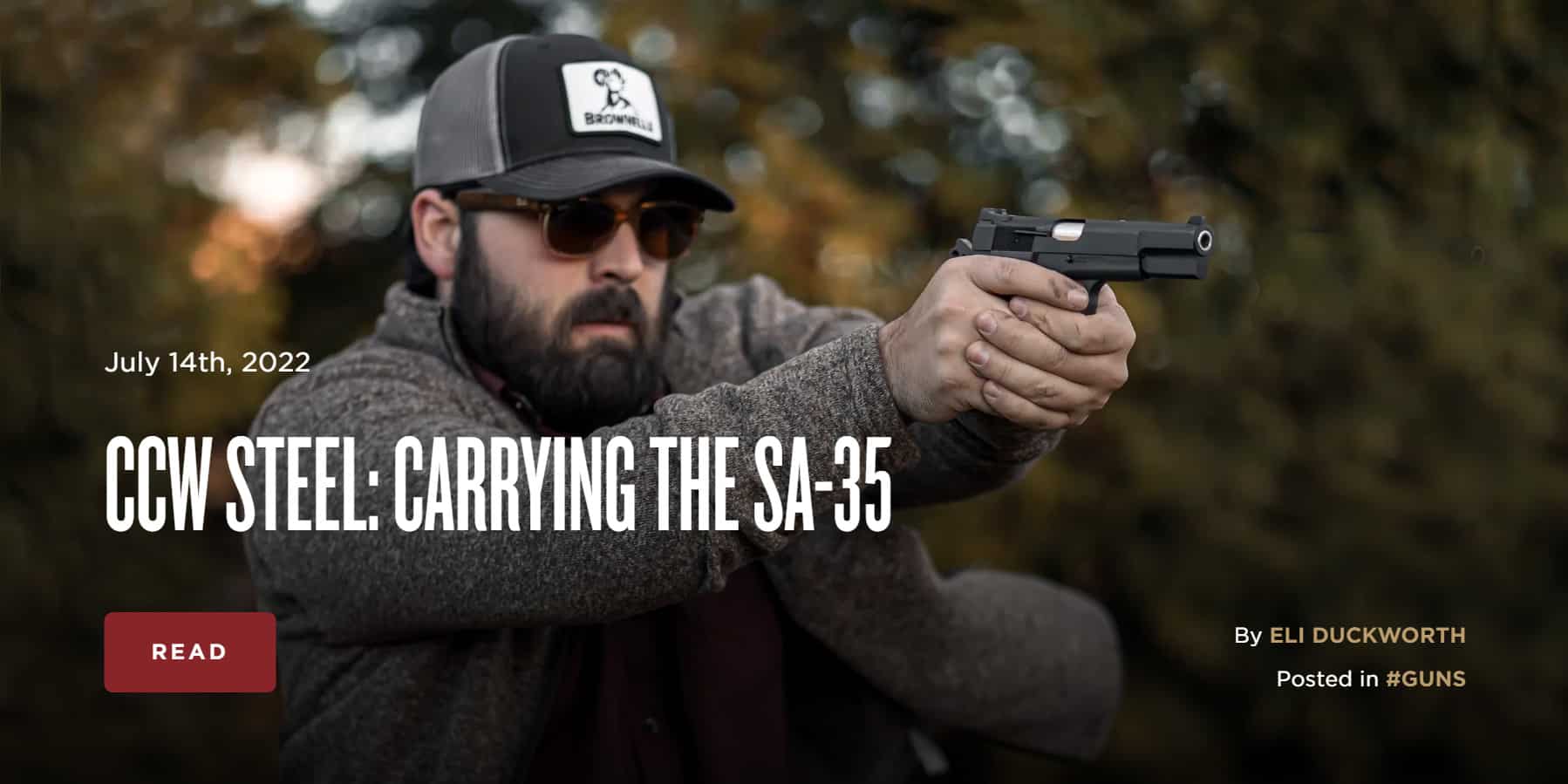 I really like The Armory Life in general, this piece about the P-35 was interesting, but can you answer one question about the reliability of the Springfield updated P35, being that quite a few folks have been having issues with early production guns after 400/1000 rounds, have any updates been done to fix these issues in newer made units? (IE extractor/reliability)
S

Don’t hold your breath waiting for their response.

I'm still waiting for the darn things to show up. I've not seen a company come up with a product that gets written up and hyped so much and then fail to deliver into customer hands like this. Do they just have a one product at a time philosophy?

Senior shooter said:
I really like The Armory Life in general, this piece about the P-35 was interesting, but can you answer one question about the reliability of the Springfield updated P35, being that quite a few folks have been having issues with early production guns after 400/1000 rounds, have any updates been done to fix these issues in newer made units? (IE extractor/reliability)
Click to expand...

so far, mine at just over 400 rounds, is still working properly.

that's about all i can say about that.

as for a ccw, nope, too big for me to do so. i like my Hellcat for now.

i have to ccw a gun that will blend in well with my bumps, jot outs, and baldness.

Seriously not interested in the SA-35 and it’s not due to the documented issues which I’m confident SA will address. In regards to the article I feel strongly that people should/can carry what they feel comfortable with however the need is paramount to make sure what you do carry is reliable.

Old_Me said:
so far, mine at just over 400 rounds, is still working properly.

that's about all i can say about that.

as for a ccw, nope, too big for me to do so. i like my Hellcat for now.

i have to ccw a gun that will blend in well with my bumps, jot outs, and baldness.
Click to expand...

Baldness?? My thought on that is just to make sure the shine from your baldness doesn’t highlight your carry piece.
W

I want one but this seems like it's made of unattainable!!! I have an original HiPower but I had rather have this one as a CCW. I know some people are getting them as I see these ridiculous prices on Gunbroker.
E

For a lefty I added an ambidextrous safety!

I've seen one locally (Northern Utah) about 5 or 6 weeks ago. Was told they had received 3 and had 2 left. The price was listed at MSRP $699. I placed an order for one last December, Springfield cancelled the order in March when the IOP program changed. The dealer put in another order in April and put in a non binding order for me, he quoted me a reasonably discounted price but higher than the old IOP price. Not expecting it any time soon and actually losing interest in the SA-35.

If they make a "detective" version, I will be in line.

I bought may SA 35 at the local Ace Hardware store in Hayward, Wisconsin for $749 about 3 weeks ago. After I got it home, I loaded it up with Speer Gold Dots and took it out to slay milk jugs at 7 yards. The pistol is a tack-driver, to use a trite slogan... I have put about 200 lead bullet loads thru the pistol (a bit above 900 fps) and it is going strong. My serial number is HP90x4, which I assume is a low number. The pistols are NOT being distributed the way they should be. The big name distributors are not sending them out to dealers, they are using them as "incentive" pieces for their own employees and those are the ones you see at inflated prices on Gbroker. I happened to get mine five minutes after the UPS truck dropped it off at the store, pure luck! I bought it fresh from the shipping box! No second chances on these! I had one "on order" by way of a distributor for 4 months and saw nothing! I conceal carry it EVERDAY, even here at home in the east of Hayward wilderness. I use a belt holster usually and never notice what it weighs loaded. I note nothing to be critical about regarding this handgun. It is beautifully made and follows the image of the original Hi-Power very closely. You want to see a MESS? Look at the "new" FN Hi-Power! It is unequivically a piece of crap!
GregT
Hayward, Wi.
S

I own 2 Browning High Powers one is a safe queen, centennial model in the wood presentation case beautiful nickel finish, the other a 99% T generation from 1968 that shoots 124 gr like a target pistol. fun to shoot an accurate pistol , a fifty plus year old one, with modern ammo and runs 100%.
Would like to get the new Springfield version, for all the "upgrades incorporated" but want to be sure something has been done to fix the known problems first.

I have about 100 rounds through mine so far. 124gr.HO with no problems. I know Springfield was surprised at the interest in the SA-35 and we're not prepared.
I found one when I went to a small gun shop. I was completely surprised to find it.
When I get the right holster I will experiment with carrying it.
W

I just got the email from Springfield in regards to my SA-35. In the email they want me to contact them and they say they are willing to send me a brand new gun. They also state "their tech" fired several magazines through it without issues and go on to state that this is the 3rd time they have it back for FTE issues. I'm at a crossroads here. I certainly do not want the original unreliable weapon back but kinda reluctant to take a new one. Perhaps I can just request they refund all of my money since I've been highly disappointed already.
G

Mike H. said:
Hello all, here is today's article posted on TheArmoryLife.com. It is titled “CCW Steel: Carrying the SA-35” and can be found at https://www.thearmorylife.com/ccw-steel-carrying-the-sa-35/.

I'm just tired of reading basically the same review items and what a wonderful weapon it is but hardly anyone seemed to be able to acquire one.

GregT said:
You want to see a MESS? Look at the "new" FN Hi-Power! It is unequivically a piece of crap!
GregT
Hayward, Wi.
Click to expand...

Have you actually seen, handled and shot the "new" FN "High Power" (FN spells it this way do not to confuse some with the original design) in order to come to that conclusion?

BTW - The new FN High Power is basically a new "look-a-like" design with little (just the ammo) cross-compatibility with the "original".
G

I have had the Springfield Armory Hi-Power in hand for about 3 weeks. I took it down and put a WWII Inglis Hi-Power Chinese Contract extra barrel I had (MY way of noting the model, thank you!) in it (after I eliminated that little projection on the top rear of the outside of the Inglis barrel (set headspace on WW II Chinese Contract Pistols?) Don't know, ground it off. The Inglis barrel then fit the Springfield Armory version of the Hi-Power, and fired two full magazines of 115 grain Federal hardball perfectly. The Inglis barrel has a very "interesting" feed ramp. No ejection problems, using either barrel, and I am certainly not disappointed with that! The "brushed blue" finish on the external metal looks a lot like gray-green Parkerizing to me, but as that finish holds an oil film quite well, no criticism from me. The internal surfaces of the barrel are finished and polished beautifully (as is the Chinese Contract Inglis barrel I have). The trigger is set at a nice 4#s. No tool marks on the internal parts and they are put together very well. The question was asked if I held and examined the new FN version in order to come to the opinion I reached about it. Nope. Keith Wood, in the August issue of Guns and Ammo, page 46 ++, has an excellent article on the new FN Hi-Power. My opinion is that FN has "engineered" the Hi-Power out of their Hi-Power! The pistol they have is not the version that the public is wild about. Not even close. As it is with a lot of other things, different folks will have different opinions. Only in America could a shooter have the chance to make such a choice!
GregT

Founding Member
FN never claimed they re-enginnered the original design (Hi-Power), that's why they re-named (simply to draw attention based on the attraction of the "original") the "new" design.

It would be helpful for readers here to disclose the conclusion of the G&A article on the FN "High Power"?