We live in the strangest of times. Terrorism can strike anywhere and anytime. Civil unrest turns neighborhoods into war zones and weather-gone-wild displaces entire populations. As the most mobile society in human history, Americans possess an unprecedented capacity to move in the face of potential disaster. However, when a large percentage of the populace hits the road to avoid catastrophe, interesting things can happen.

It’s not all darkness and chaos. Stress and hardship, for the most part, brings out the best in Americans and citizens pull together for the common good. As was seen during Hurricane Katrina, however, that is sadly not always the case.

I have a relative who escaped her upscale New Orleans home literally as the mob turned the corner and came down the street. If the exigencies of life force you to bug out, then you will need a few things. A little food and water along with some basic first aid supplies are in order but none of that matters if you are not prepared to defend it. If you can’t protect yourself and your family, then all your cool survival stuff just went to some feckless goon with a bigger stick, a nastier disposition and fewer scruples. Springfield Armory produces the ideal tools to keep you and your brood warm, healthy and secure while you are trekking out of the hot zone in search of sanctuary.

The very name Springfield Armory is synonymous with American firearms. For nearly two centuries, this company’s namesake served as the primary arsenal and hub of firearm innovation for our nation’s military. The original Springfield Armory is now a National Historic Site administered by the National Park Service. The company bearing the name today is a respected producer of modern tactical arms.

The M14 was the standard infantry rifle of the United States Army for about a decade before being supplanted by the 5.56 (.223 caliber) M16. The adoption of the M16 over its .308 predecessor ignited a firestorm of controversy, smoldering even today. What no one seems to debate is whether or not the M14—along with its .30-caliber cartridge—is really enough gun.

Built upon the combat-proven chassis of the M1 Garand with which the American GI liberated the planet, the M14 incorporated such upgrades as an improved gas system, a removable 20-round steel magazine and select-fire capability. The most modern iteration of this venerable military arm—Springfield’s SOCOM 16 CQB—is the very pinnacle of modern .308 tactical tools.

Its Archangel stock is polymer, collapsible and essentially indestructible. There is enough railed real estate on the forearm to accommodate any manner of electronic gadgetry, and the stubby 16-1/4-inch barrel is topped off with a compact flash suppressor. The action accepts any standard 20- or 30-round box magazine. The front sight sports a luminous strip for easy acquisition, and the gun comes from the factory with a miniaturized electronic red dot sight.

With the VortexVenom mounted on the stripper-clip guide, the SOCOM 16 CQB is optimized for close-range work, becoming a room-clearing hotrod. Whether you’re moving through buildings or operating out of an automobile, the CQB combines feline maneuverability with raw punching power. If the threat is behind a car door or mild barrier material, then the SOCOM 16 CQB will reach it.

While I like to print impressive groups at 500 meters just as much as the next guy, the reality is: there is no imaginable scenario wherein an American civilian shooter would be called upon to do that in a real survival situation. As any use of a firearm would be entirely defensive in nature, ranges will inevitably be close and scary. But with the SOCOM 16 CQB, any American forced to take flight in the face of disaster won’t be outgunned.

Any gunman worth his spurs knows while a long gun is indeed a proper and indispensable tactical tool, a handgun is your constant companion when 911 gives you nothing more than a well-intentioned recording. Springfield Armory has you covered there as well.

The XD-M .45 is the company’s ultimate iteration of their proven and popular XD line of combat handguns. Incorporating Browning’s apparently perfect recoil-driven, tilting-barrel action originally introduced in the P35 Hi-Power, the polymer-framed XD-M is a robust, reliable and mature weapon system.

In the case of this particular XD-M, the sights are elevated for use with a suppressor, and the 5.28-inch match-grade barrel is threaded accordingly. Call me old-fashioned, but the 1911-style grip-to-frame angle of the XD guns has always suited me better than the more Luger-esque layout of the “Other Guys’” plastic pistols. The overall impression is the XD-M is attractive, lightweight (for a full-figured handgun) and comfortable.

To perfect the package, we mounted up a Gemtech GM45 G-Core suppressor. The G-Core, which began as an idea on a dinner napkin, is cut from a solid cylinder of 7075 aluminum, based upon a scientific foundation of computational fluid dynamics and finite element analysis. The resulting can is easily maintained, lightweight and effective. There is a LID (Linear Inertial Decoupler) for reliable operation, and the registered bit is little more than a simple tube threaded on one end, so maintenance is a snap. For proper “movie-grade quiet,” plop a dollop of Vaseline behind the first baffle and go wild.

The short-barreled SOCOM 16 CQB is loud and powerful. But the suppressed XD-M throws big fat bullets without telegraphing it to everybody in the neighborhood. The extra weight of the can combined with the superb ergonomics and proven operating system produce a tactical handgun par excellence. Drop the gun in your center console or strap it to your belt and you are ready for any reasonable crisis as well as most of the unreasonable types. The resulting package is indeed bulky, but quietly throwing those big, honking 230-grain flying ashtrays downrange means not having to say you’re sorry in any language.

Movies have spoiled us for a lot of things, not the least of which are sound suppressors. In the cinema, our heroes can squeak 1,000 rounds out of a single magazine and dispatch Bad Guys with a silenced pistol sounding like a mouse fart. Out here in the Real World, the biggest benefit to be gleaned from a proper suppressor is hearing preservation and communication. Touch off an unsuppressed handgun inside a car, and everyone inside it will be answering the phone for a week when it’s not ringing. But hang a can on the end of the barrel, and you can still shoot, move and communicate effectively.

With few exceptions criminals are opportunists. It is not really necessary that you be trained, armed and equipped to displace ISIS from Syria singlehandedly. You just need to be pricklier than the next guy. With the new SOCOM 16 CQB and XD-M combo from Springfield Armory, that message is communicated unambiguously. Nothing seems to scream, “Don’t screw with me, dude,” like a chopped M1A and a suppressed .45.

In the Final Analysis

We live in a weird old world, and it’s getting weirder daily. In a sea of things to fret about, one thing that need not be a source of anxiety is the security of your family if you are forced to take flight in a crisis. Whether you need to secure food on the hoof or guard against predators of the bipedal sort, the Springfield Armory SOCOM 16 CQB and XD-M are the insurance policies that never seem to expire.

Editor’s Note: This article was written by Will Dabbs and shared with us by GUNS Magazine.

Please be sure to check out the new The Armory Life Forum, where you can comment about our daily articles, as well as just talk guns and gear. Click the “Go To Forum Thread” link below to jump in! 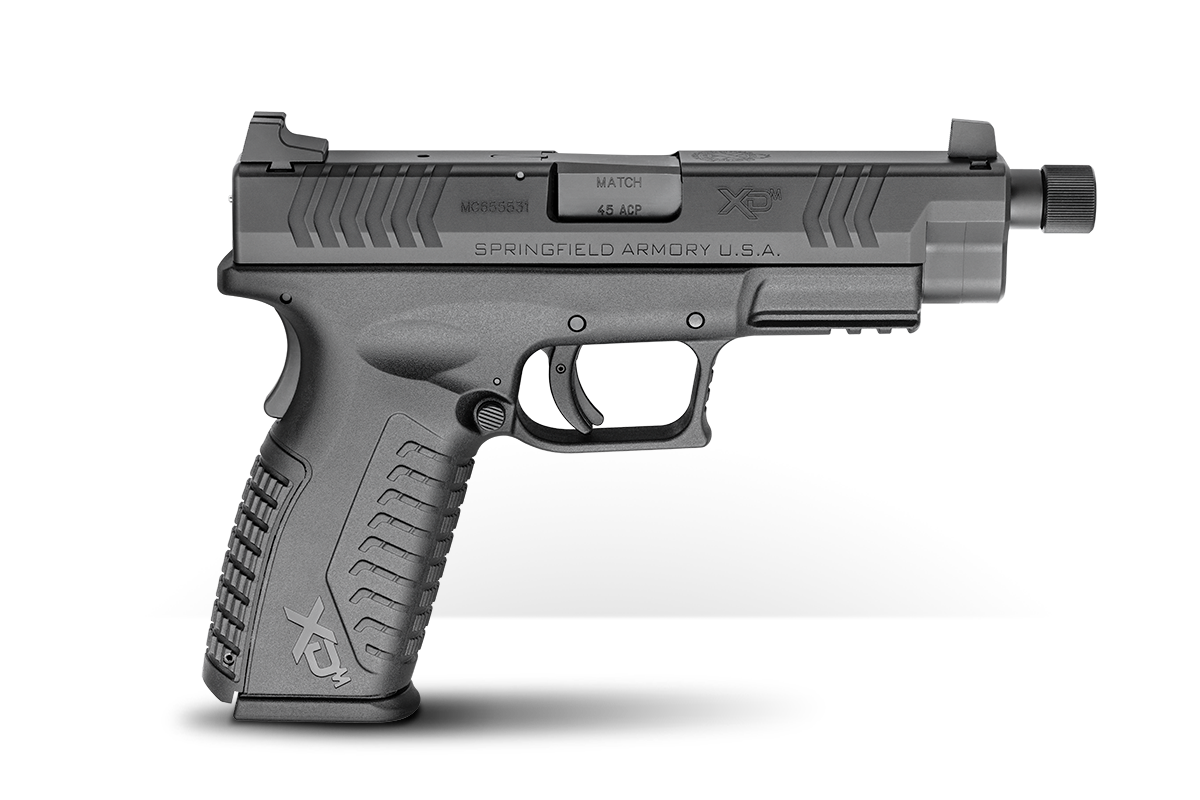 Accessorizing Your SOCOM for Defensive Purposes

When You Can’t Bug Out