One of the most talked-about things at the NRA’s 2017 Annual Meeting in Atlanta was Springfield Armory’s introduction of their XD-E, a traditional double-action, hammer-fired compact 9mm single-stack autoloader. What was this, a retro thing in our era of striker-fired pistols? Gun pundits were probably wondering whether they would introduce a revolver next, as Kimber already had.

The retro element was certainly part of it. Beretta and SIG have seen a renaissance of interest in their traditional double-action (TDA) autos, TDA guns being double action only on the first shot and single action thereafter, to be de-cocked when there was a “lull in the shooting.”

In the past, when people in the gun world called TDA “an ingenious solution to a non-existent problem,” there were those of us who figured anyone who said this was either not planning to take prisoners, or didn’t understand “the problem.” The problem is, whether you are cop or civilian, good guys take a whole lot more bad guys at gunpoint than they shoot. The research of Dr. Roger Enoka has long since shown under stress, a finger on the trigger can be caused to involuntarily contract by startle response, postural disturbance or inter-limb response.

“Just keep your finger off the trigger until it’s time to shoot the bad guy” is a nice idea, but it presumes the gun is in the hand of a perfect human being incapable of making a mistake. Only our mothers think of us that way, and frankly, a lot of our moms are more realistic than this. A long, heavy pull for the first shot is not a perfect panacea, but is indeed one more safety net against unintended discharge.

There’s also a “safety to the user” element. A finger reaching the trigger too early on the draw, or something — including, but not limited to, your finger — getting into the triggerguard as you return the loaded pistol to the holster can have disastrous self-injuring consequences. A TDA pistol with an exposed hammer adds, with the latter feature, one more safety net. By riding the hammer with the thumb during holstering, anything pressing the trigger rearward will have to force the hammer to rise. The thumb can feel this, stop the insertion, and prevent the unintentional shot.

The same is true of a cocked-and-locked, hammer-fired pistol, and this applies to the XD-E since it is designed to be carried in this mode as a manufacturer-approved option. Here, the thumb is holding the hammer back and can feel it and catch it if it comes forward after being tripped by the trigger. And, of course, the on-safe part of “cocked and locked” is yet another critical safety net here.

With the current surge in popularity of appendix carry with the gun in the front of the waistband, these features have come to be all the more appreciated. A negligent discharge in the holster sending a bullet through the gluteus maximus does not concern the male of our species nearly so much as one going downward from belt buckle level. It’s kinda hard to be macho about something blowing off the parts which define one’s masculinity. The XD-E — hammer, safety catch and long double-action first shot pull option — is thrice comforting in this situation.

This is a thin (less than an inch wide), light (25 oz. unloaded per factory spec, and actually a tad lighter on my own scale), polymer-framed 9mm that comes with a short 8-round mag for concealment and a longer 9-rounder. Recoil is mild. Trigger reach is surprisingly long for a pistol this size. Pull weight on our test sample went a whisker over 11 lbs. in DA and 6.31 lbs., measured on a Lyman digital trigger pull scale. Pull was smooth and re-set was a bit on the long side — but did not seem to be problematic.

The XD-E comes with an ambidextrous frame-mounted safety/decock lever. Up is “safe,” down (parallel to the barrel) is “fire,” and all the way down is “decock.” It’s similar to the current version of Taurus’ all-metal Beretta-style pistols in this respect, or Variant 1 in HK’s USP series.

It comes with a standard “XD” feature — an ambidextrous mag release. This is handy for southpaws and also for us righties who can use our trigger finger to press the button. Front sight is red fiber optic, and the rear has a generous notch with big white dots on either side. Good sights. There’s a small rail on the dust cover for light/laser attachment. A low-profile shark fin loaded chamber indicator is found atop the slide behind the chamber, visible when it’s up in daylight and palpable in the dark.

Devil’s In The Details

The pointy toe of the trigger pinched my finger uncomfortably between it and the inner lower edge of the triggerguard in double-action work, but it didn’t seem to happen in single-action fire. For me, the gun shot high with 115- and 124-gr. ammo, but was spot on with 147. This is unusual as 147 gr. usually hits higher than the others. Just a reminder to “know thy pistol and ammo” rather than trusting conventional wisdom. Recoil was as mild as you’d expect in a 9mm pistol in this size range.

The XD-E packs a 3.3″ barrel. Such pistols are usually tested at 15, 10 or even 7 yards on the theory they’re not built for distance. Since bad people with guns don’t cut us slack for our barrel length, I test them at the standard 25-yard distance anyway, measuring the whole 5-shot group and also the best three therein, the latter to factor out any human error. I like to use the three most popular bullet weights for the given caliber.

Nosler Match, deservedly expensive because it’s engineered for accuracy, wasn’t the most compatible with this particular sample pistol. Its five 115-gr. jacketed hollow points went into 5.80″, though the best three were at 2.65″. At the other end of the 9mm weight scale, SIG brand 147-gr. round nose full metal jacket did 3.55″ for all five but plunked the best three into a much more promising 0.85″. The middle ground was the sweet spot for 5-shot groups in this particular test: Speer’s Gold Dot 124-gr. +P drilled a 2.05″ group for five shots and put its best three in the second 0.85″ cluster of the test. For a pistol pretty close to pocket size, I’m happy.

You need to know one more XD-E feature. Its forward-sitting recoil spring guide gives it stand-off capability. Where most autoloaders will go out of battery and fail to fire if pressed against a homicidal attacker’s body, this one won’t. It can literally be a life-or-death difference, depending how the fight goes.

At the time of the GUNS test, I couldn’t get my hands on a dedicated XD-E holster and had to make do with others which more or less fit. By the time of the American Handgunner test, holsters made by such firms as Green Force Tactical were coming out. One such inside-the-waistband Kydex unit was what I carried the XD-E in for about two weeks. As you might expect, the flat, light XD-E proved comfortable to carry, whether beneath an un-tucked polo shirt or under a more conventional cover garment.

It may have been more than half a century of habituation to the 1911 thumb safety, or my arthritic old thumbs lacking range of movement, but the safety/decock lever proved a bit awkward for me. The ambi-levers sit a bit higher and more rearward than what we 1911 dinosaurs are used to. After a good bit of carry in all three optional modes, I finally settled on double action, off-safe for the first shot. For my particular hands, it was simply faster.

I like to shoot a test gun under some pressure. There were no matches intersecting with my schedule, so a week teaching with the XD-E culminated in me using it in the Pace-Setter on the last day. This is when the staff and I demonstrate the course of fire the students will qualify on. More than 30 paying customers watching, all of whom are wondering if the guy they paid to teach them to shoot can actually do it himself, pretty much gives you your daily adrenaline requirement.

It requires 60 shots. From four yards to 15, all under time constraints drawn from police qualification courses. Dominant hand only, non-dominant hand only, two-hand standing, awkward use-of-cover positions, several speed reloads and the clock running the whole time. The even and consistent “roll” of the XD-E’s trigger came into its own, and despite the short sight radius the score finished as 300 out of 300, with all 60 bullet holes clustered neatly center into about 4.5″. Ammo used was 147-gr. Winchester. I was happy.

I like the XD-E’s concept. I like its utter reliability. The test sample is past 1K rounds in many hands now without a single malfunction of any kind, and went several hundred of those before its first takedown and cleaning. It seems to “shoot above its weight class” in terms of deliverable accuracy under pressure.

The safety/decock lever was awkward for me and the trigger pinched my finger on double action, but it may not for you. A bit of dry-fire in the gun shop before you lay your money down will determine whether or not those factors will be a problem for you.

Features, build quality and affordable price add up to make the Springfield Armory XD-E 9mm, in my opinion, an excellent value in a concealed carry pistol.

Editor’s Note: This article was written by Massad Ayoob and shared with us by American Handgunner. The original article can be seen here.

Also, be sure to check out The Armory Life Forum, where you can comment about our daily articles, as well as just talk guns and gear. Click the “Go To Forum Thread” link below to jump in! 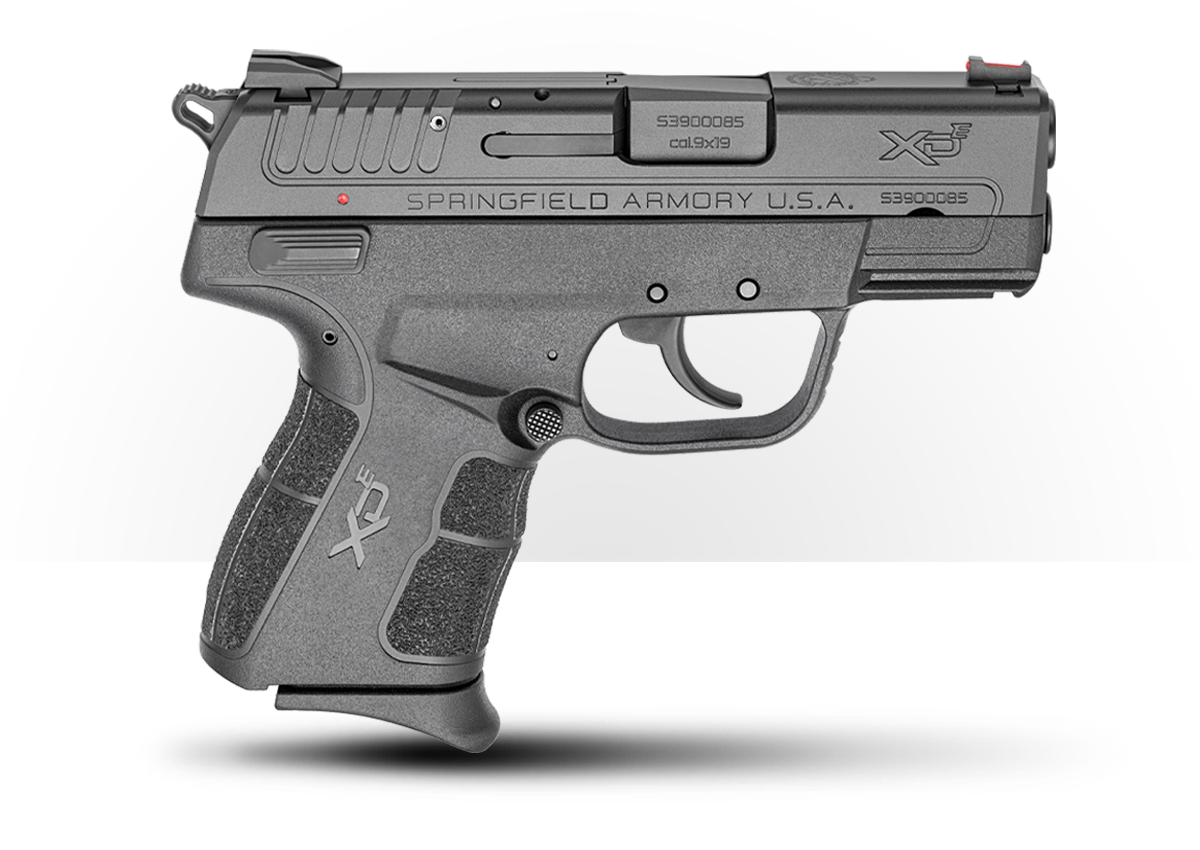