Can Your EDC Shoot Like a Full-Size? Hellcat RDP vs. XD-M Elite

By The Humble Marksman

It is a trope as least as old as the internet — someone releases a new small gun and some gun reviewer somewhere boldly proclaims “this gun shoots like a much larger gun.”  Previously, smaller guns only had geometry of the frame to help fight recoil, but the Hellcat RDP brings in technology to assist with the task in the form of a compensator and a red dot sight. I tried it against the excellent XD-M Elite Tactical OSP.

Before diving into the test results, let’s establish a baseline of how we control recoil. Placing our hands as high as possible on the gun to reduce the leverage of the slide reciprocating is the first way we tame recoil. Using our support hand to reinforce the direction of our strong hand grip on the gun is another way, and a good stance are all things we can do.

The gun’s physical characteristics then come into play. The grip being long enough to fit all fingers on the gun and exert strength is important. The characteristics of the gun also matter — to a certain point. A heavier slide is going to feel less violent in recoil than a lighter slide — so that is points against the Hellcat… unless that gun has a compensator (which it does: read about the Hellcat RDP compensator). In this case, a lighter slide can become a bonus.

The broader the base of the grip where it hits your palm, the more it will spread out the force in your hand. Trigger pull weight relative to frame weight can affect accuracy (lighter guns are easier to pull off target), and a longer sight radius will make a non-perfect sight picture yield better hits — but the RDP comes dressed with a HEX Wasp red dot, so sight radius is a non-issue.

Compensators on carry guns can be interesting. A compensator works by redirecting gas from igniting the round. Rather than the gas exiting the muzzle and imparting energy on the slide to the rear, it redirects gas to the sides and up and reduces the energy with which the slide cycles.

Ammunition that generates more gas will work the compensator harder, so compensators will benefit from a light-for-caliber projectile loaded to a faster velocity. A great round for a compensated 9mm gun is a 115-grain NATO load. Heavier for caliber rounds, like 147 grain, produce less gas so and therefore get as much benefit from the compensator.

Through my own testing using a Mantis X10 Elite to measure the angle of muzzle climb, a carry compensator reduces the angle of muzzle climb between 15-25% depending on the load being tested — even with standard pressure loadings. [Editor’s Note: See our Mantis X10 Elite review.] Shoot a Hellcat RDP with the compensator on, unload the gun, remove the compensator and shoot it again. If the sensation in hand isn’t enough, take note of where your brass landed. The compensated rounds will drop the brass about half as far from the uncompensated rounds.

What does that mean in the real world? To test the effect of this I elected to do two drills — the Super Test and the Bill Drill. The Super Test is shot on an NRA B8 style target and is three, 10-shot strings of fire at 5, 10, and 15 yards. The catch is there is a par time on each string — five, 10 and 15 seconds, respectively.

Your score is the number of points you shot. Anything above 290 is considered very good with a perfect score being 300. The Bill Drill is shot at 7 yards on a USPSA humanoid target — it’s six shots as fast as you can pull the trigger and the goal is to observe your recoil management — how close together can you keep all the shots? The gold standard from the holster and hands at sides is two seconds, all alphas. Unfortunately, I didn’t have a holster that supported the Hellcat RDP so I fired all strings from low ready.

The XD-M Elite OSP went first. Since I was cold, the first gun fired will have a disadvantage. At the 5-yard line my time was over a second faster with the XD-M Elite and it was significantly easier to hold the group close to the X ring. I barely made the par time with the RDP. Both guns delivered accurate fire and I didn’t drop any points with either gun at the five-yard line.

I noticed that I was using my trigger finger to help tame recoil on the RDP — which slowed my shot to shot (split) times. Since both guns are red dot equipped you can visibly see the sights recover from recoil as you are shooting. The mass of the XD-M Elite made recovery happen quicker and it was evident that my support hand having no space on the frame to help mitigate recoil was a factor.

At the 10-yard line, my raw time was appreciably faster with the XD-M Elite Tactical OSP. I felt like I had enough time to deliver accurate fire and the marksmanship challenge didn’t hamstring the little gun quite as bad as it did at the 5-yard line. At about this distance the trigger on the RDP was appreciated. Using a rock-solid grip and good trigger fundamentals I managed to drop only a point apiece at 10 yards. So far so good.

At 15 yards is usually where most points are dropped. Sins in technique are amplified by distance. A total of 15 seconds is a long time — just using math giving yourself a full second of aiming for your first shot — you must keep a 1.4-second cadence shot to shot to make par.  At this speed and distance, I didn’t notice the difference between the guns.

The Bill Drill went as expected. The XD-M Elite was faster and kept all the shots in the A zone with an average split of .18-.22 seconds. The RDP was slower with an average split of closer to .3 seconds. The grouping was the same size — despite one C with the RDP — but the cadence was slower. I had to work much harder at my fundamentals with the little gun, but the results were acceptable.

So, to answer our question, the big gun is still easier to shoot, but at what standard do you need to shoot? Many law enforcement trainers suggest about a .5 second split is typical when using aimed fire — at that cadence both guns perform about the same. If I were preparing for a competition, I for sure would want the bigger gun, but in selecting which to keep in a holster on my belt all day I’d be completely comfortable with the Hellcat RDP. And that XD-M Elite — if I had the means to comfortably carry it — would certainly do its part as well. 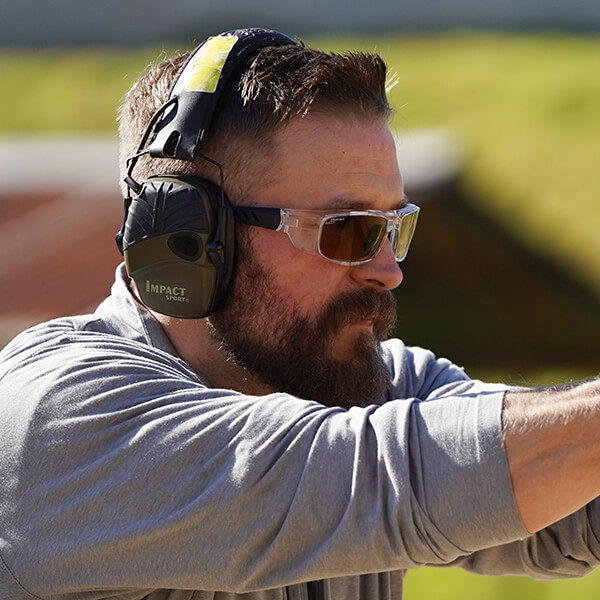 David from The Humble Marksman YouTube Channel is devoted to practical pistol proficiency. He is classified as a Master in the United States Practical Shooting Association (USPSA) in both Carry Optics and Production and is a Master in Stock Service Pistol in the International Defensive Pistol Association (IDPA). David started competitive pistol shooting in 2013 as an avenue to become more competent with concealed carry, but fell in love with the sport. He found pursuing mastery in practical shooting carried over into all other aspects of both his shooting and his life. The mission of his channel is to help others reach new heights in their own shooting and to promote participation in the practical shooting sports.