Don’t Read This If You Play Dungeons & Dragons

The Aimpoint Acro P-1 is the only fully enclosed micro red dot sight on the market today. Acro stands for “Advanced Compact Reflex Optic”, and while lots of folks make optical sights these days, this one is tough enough to stand up to just about anything you could throw at it. But how did we get here?

We Had It All Wrong

I grew up with the original Star Trek. Those three seasons running from 1966 through 1969 encompassed some 79 episodes ranging from ridiculous to sublime. Gene Roddenberry, the show’s overarching creative force, envisioned a sort of Wagon Train to the stars. Packing classic Western themes of adventure and rugged individualism in a setting made fresh by the ongoing space race, Star Trek became an instant period classic.

Star Trek proved to be a prescient vehicle of prophecy — it just wasn’t how we expected. What the world took from Star Trek wasn’t shuttle service to the stars. It was doors that opened automatically and an absolute revolution in microelectronics. Nowadays, every trip to Walmart starts with a door that opens of its own accord. Additionally, I carry a communicator-sized smartphone around in my pocket that will instantly connect me with Istanbul if I punch in the right combination of numbers.

These microelectronics affect every aspect of our modern lives. Paranoid parents track their children, and children track their pizzas. I carry more computer power in my pocket than launched the space shuttle.

While this revolution fundamentally altered health care, travel, government and entertainment, it also changed the way we run our guns. When I was a soldier, we qualified with our weapons out as far as we could see over iron sights. Today, iron sights are just an afterthought to be used if your primary optic fails. Roddenberry would be proud.

It took us a decade or two to grow comfortable with electronic optics on our rifles. Nowadays you really can’t eat at the cool kids’ table at the local range if you don’t have something battery-powered and sparkly perched atop your favorite black gun. Of late, however, we have also come to expect the same capabilities on our handguns.

At its heart, the Aimpoint Acro P-1 you are seeing here is a red dot reflex collimator 1X electronic sight. A red Light-Emitting Diode (LED) produces an aiming point via a small screen. With both eyes open, the aiming point projects out to infinity such that it seems to hover atop your target. Somehow the dot remains sharp and distinct at a distance where you need it rather than up close inside the sight where you don’t. I truly have no idea how they do that — but I’m glad they did.

The sight zeroes with a small included wrench. Simple waterproof “up” and “down” arrows control intensity through 10 brightness settings. The Acro P-1 is NVG compatible and projects a 3.5-MOA dot. The whole rig weighs a paltry 2.1 ounces.

Lots of folks make red dot sights that will do stuff like that. However, the Acro will also thrive underwater down to 25 meters. The sight is rated for operation between -49 and +160 deg F as well. Sundry adaptor plates and mounts will set up your Acro on a variety of popular handgun platforms as well as anything sporting a Picatinny rail. I chose to strap it to my Springfield Armory SAINT rifle.

The SAINT is a high-end black rifle at a mid-range price. Featuring all the cool-guy stuff you’d typically pay extra for elsewhere, the SAINT is optimized from muzzle to butt for defensive applications. From the premium Bravo Company furniture to the nickel boron-coated internals to the 1:8-twist 16-inch barrel and mid-length gas system, everything about the SAINT is bred to run.

Aimpoint has been building rugged combat-grade optics for the U.S. military for a very long time. In the Acro, we see that same mil-spec indestructibility built into a legitimate micro red dot chassis. It won’t freeze, you can’t overheat it and the thing just sips off its battery. The Acro remains ready for action for literally years between battery changes.

The whole unit is anti-reflection coated, and the active light it produces remains invisible beyond ten meters, even under NVGs. In testing, the Aimpoint mob subjected a standard Acro to 20,000 rounds of .40 SW with no adverse effects. Whether you use the Acro as an extremely low-profile primary long gun optic, a back-up to a bulkier magnified sight or as a targeting system for your favorite service handgun, it remains all but unkillable.

If you want a sight to run on your airsoft rifle the next time you hit the playing field with your buddies from the local Dungeons & Dragons society, then by all means pick something cheap off of eBay and have at it. However, if you might have need of your weapon in the Real World, the Aimpoint Acro is the red dot sight you can legit take downrange. Beat it, burn it, drop it or freeze it, the Acro P-1 really doesn’t care. It just doesn’t stop. 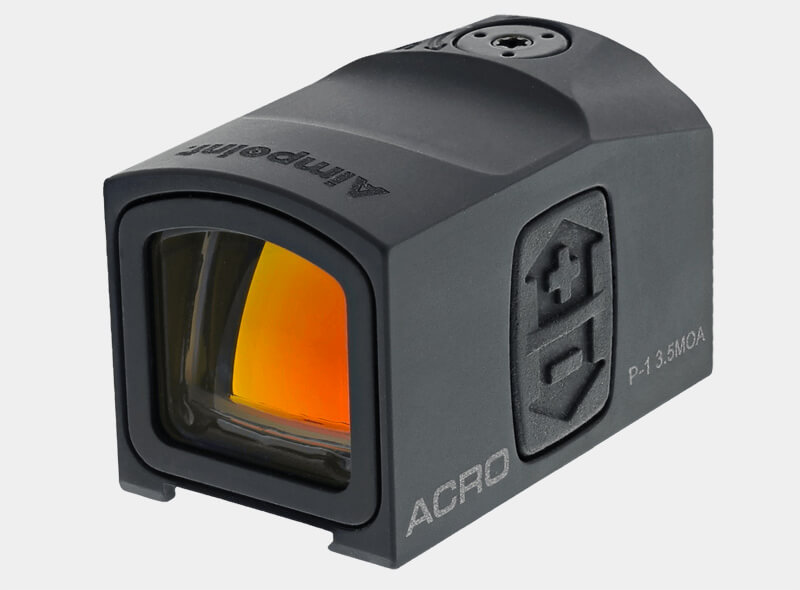 What If Zombies Show Up in Cars?