The Cold War of the 1950s featured several violent insurgencies around the world. The French fought insurgents in Southeast Asia and in Algeria. The British dealt with uprisings in Malaya and Kenya. Revolution and revolt rocked Cuba, Egypt and Laos. By the early 1960s, uprisings would burn in the Congo, Rhodesia, Mozambique, Angola and Columbia. The war in Vietnam ramped up. The conflict in many of these nations took place in rugged jungle environments. New small arms were in demand to effectively fight, or counter, a guerrilla war.

The United States had recently come through the long and arduous process of replacing its primary battle rifle (the M1 Garand) with the improved M14. In 1959, the M14 became America’s standard rifle. Shortly after the M14 was adopted, a host of new roles were envisioned for it — from squad automatic weapon to even submachine gun. A unique part of the M14’s “mission creep” was to address the much-discussed nuances of jungle and guerrilla warfare, an exceptionally hot topic of the era.

To this end, while Harrington & Richardson was engaged in producing M14 rifles, it began to work on some modifications of the design. One of these was actually named “The Guerrilla Gun” (which is a bit of a misnomer, as the rifle was never intended to be issued to guerrillas). Apparently, creating new product names was not a strength for H&R.

The modified M14 was lightened and significantly shortened, and harkened back to the earlier T26 project to shorten the M1 Garand. The new barrel was chromium-plated and trimmed by 4.5″ for a new barrel length of 19.3″, for a new overall rifle length of 39.8″. Clearly noticeable is the large, perforated cone flash hider. A few examples may have been fitted with a metal under-folding stock. Firing the Guerrilla Gun, particularly on full-auto, must have been quite an adventure. If the standard M14 (with full barrel length) was considered “uncontrollable” during automatic fire, the lightened and shortened variant (potentially with a folding stock) must have been similar to firing a machine gun and flame-thrower at the same time.

Not a lot of information exists on the H&R “Guerrilla Guns”. Their serial numbers began with the letter “X”. At least one was provided to Springfield Armory for testing during 1962 and was transferred to their museum in 1965.

This article is featured in Volume 7: M1A Digital Magazine

Here are Springfield Armory’s cryptic notes on the rifle in their collection:

The strange Guerrilla Gun highlights an ongoing problem in military firearms design. To be effective as a battle rifle, a rifle needs sufficient weight for stability and barrel length for downrange accuracy. Knockdown power generally requires a larger cartridge. The firepower needs of a modern battlefield demand full-auto capability. Budget parameters require that the platform serves well in many roles.

Contrast those needs with the desire to provide troops with a light and simple weapon, one that is compact and easy to carry in paratroop operations or the tight quarters of vehicles, urban areas or jungle environments. It must be comfortable to shoot, accurate and have a good cyclic rate. All the military wants is, well, everything. We have yet to find one rifle platform that does everything well. Even a fine rifle like the M14 cannot be stretched and shrunk to fit roles that vary from light machine gun to submachine gun.

Regardless, that was the firearms design challenge in the early 1960s as America faced a growing jungle war in Southeast Asia, along with other potential conflicts in Africa and South America. The U.S. Military had worked on this problem since the late 1930s, and had developed some other small arms options, circa 1962, to fight against insurgent forces.

The M1 Carbine was originally developed as a defensive weapon for specialist troops (like radio operators, artillerymen, drivers and officers) to replace the M1911 pistol and the Thompson submachine gun. This did not happen, but the Carbine was well-liked and so it joined the mix of American World War II small arms. At 5.8 lbs. loaded and just 35.6″ long, the Carbine is a soldiers’ dream to carry. However, the .30 Carbine cartridge is essentially a pistol round, so accuracy and knockdown power drop off rapidly past 100 yards. After World War II the selective-fire M2 Carbine was introduced and proved itself capable as an automatic weapon. In Southeast Asia, the Carbine fit the small stature of the local troops well and everyone appreciated the handy nature of the light rifle. However, the low power of its ammunition continued to dog the M1 Carbine due to its inability to penetrate cover.

The .45 caliber Thompson SMG was another capable combat veteran from World War II. Sturdy and dependable, the Thompson delivered tremendous short-range firepower. However, its 10+ pound weight wasn’t making many new fans. Basically, the Thompson was too heavy with much too short range to meet the needs of the modern battlefield. The Army of the Republic of Vietnam (ARVN) forces began to phase them out during the mid-1960s.

The M16 also became a major player in the jungles of Southeast Asia. It was born from the earlier 7.62 NATO AR-10, which used modern composite and forged alloy parts, coupled with an innovative straight-line barrel and stock design. Arriving too late to participate in the competition between the M14 and the FN FAL, the AR-10 raised a lot of eyebrows but ultimately made few sales. It was later sized down and adapted to fire the new .223 (5.56) cartridge and dubbed the AR-15.

Time would prove the AR-15 to be a capable firearm, and with minor modifications, it became the M16 we know today. The U.S. Army would shortly approve it for jungle warfare operations. By 1969 the M16 would replace the M14 as America’s standard rifle.

It’s really interesting that while the “Guerrilla Gun” M14 might not have been adopted in its day, Springfield Armory recognized the merits of an ultra-compact version of the M14-pattern rifle and developed its M1A SOCOM 16 line in response.

With a short 16¼” barrel, shortened gas system, capable muzzle brake and impressive 7.62 NATO power, the SOCOM 16 family is a lot of gun in a very small package. In particular, the new M1A Tanker really captures the retro spirit of this rifle, with its beautiful walnut stock and classic M14-style lines.

This article is featured in Volume 7: M1A Digital Magazine 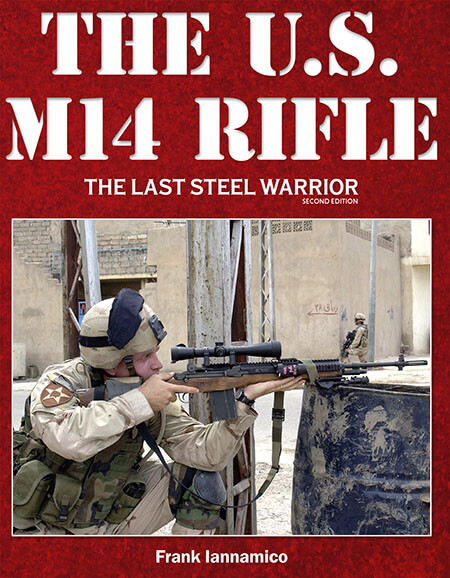 What Is the “Tanker”?

Tom Laemlein is a historian. While that might sound mind-numbingly awful to some, he enjoys it. His deep dives into historical research keep him (mostly) out of trouble and, yet, too often away from the rifle range. Tom is the author of more than 30 books on military history and weapons systems. He regularly contributes articles to national magazines and websites on military history and firearms topics, and historical photos from his collection are used by publishers around the world. In those times that he is cornered in a corporate environment, he will talk about marketing until he is released. Tom is married to a very patient woman, and they live on America’s North Coast, near Lake Ontario. His regular misadventures with Wally, his young Tibetan Mastiff, remind him that life must be enjoyed full-bore, at least until you are ready for a nap.