If by some miracle there had been a machine with the magic X-ray capability allowing a look in to my handgunnin’ heart 25 years ago, the largest chamber revealed would have been labeled “Single Action Sixguns” followed by a slightly smaller section with the words “Double Action Sixguns.” A third pigeonhole, only slightly smaller than the first two, would bear the title “1911’s” and then the last two smaller ones would say “.22 Pistols and Revolvers” and “Thompson/Centers.” That’s it. There’d be no room left over.

It was about this time polymer pistols arrived. If you looked at the silhouette only of a Colt Single Action or Smith & Wesson N-Frame or a 1911, the beautiful form still comes through. Match a polymer pistol silhouette with its funny safety trigger with any of these three and it was downright laughable. Then when the light reveals more than the silhouette and we see the whole enchilada the first three are beautiful enough to hang in an art museum as well as being highly functional. There was nothing artistic whatsoever about those first plastic pistols. My group of handgunners all laughed at them, made jokes about them and said we’d never even bother with one. Then a weak moment came and some of us actually allowed ourselves to shoot one. When the shooting started, the laughing stopped.

My eyes were opened and the ugly duckling started to look more like a graceful swan. Here was not a work of art, at least on the surface, but a highly effective tool which always worked and never failed its user. Over the ensuing years it has been most interesting to watch the evolution of the polymer-framed, safety-trigger, semi-automatic pistol. GLOCK was first, and soon followed by Springfield Armory, Smith & Wesson, Taurus and even Ruger. If memory serves me right, Springfield Armory was the first of the later four to take up polymer pistols and their lineup was revealed to me at a seminar held, again if memory serves me right, in the early 2000s. Of course we all know there is no such thing as a plastic pistol, but rather these are polymer frames with steel barrels and slides. Originally they were all black and stirred the same emotions among the anti-gun crowd as those so-called “assault rifles.”

As the handgun evolution has gone on resulting in better and better pistols, even color has been added and black is no longer the only choice being followed very closely by desert tan and other combinations. There are even custom shops doing about any color pattern you could want, from camo to American flags.

The “M” not only stands for a Match grade barrel but also upgrades Springfield calls the “M Factor.” This includes a dished out area for the thumb while the slide contains what Springfield calls Mega Grasp serrations. These are found both front and rear and provide a very positive gripping surface for working the slide.

M also stands for Minimal Set Trigger which resets very easily and in a short movement and Melonite, a black or silver finish on the slide. The 5.25 is for the actual barrel length of 5 1/4″.

For gripping security the frontstrap also has positive serrations which wrap around both sides and the backstrap also has these same serrations. For individual custom fitting three easily changed differently sized backstraps are provided. I settled on the smallest as it is the most comfortable to me and it seems to give a 1911-type feel.

The magazine release is ambidextrous, easy to reach, and magazines release easily. On the bottom of the frame in front of the triggerguard we find a triple position rail system for the attachment of a light or laser. Safety features in the grip frame include a grip safety which must be depressed before the XD-M will fire as well as a safety on the trigger. In addition to these two safety features mentioned, there is also a cocking indicator at the back of the slide below the rear sight and a loaded chamber indicator at the back of the ejection port.

Sights are excellent consisting of a fully adjustable rear sight matched up with the red fiber optic front sight. Extra fiber-optic bars are included in both red and green. The XD-M .45 is exceptionally easy to handle and shoot, trigger pull is a smooth 7 pounds and functioning is absolutely flawless with no failures to feed or fire. Most of my 5-shot groups for 20 yards are in the 2″ range, however this test pistol arrived about two weeks after one of most beautiful summers we’ve ever experienced followed by an Indian Summer had both disappeared.

In years past, way past, I was able to shoot outside no matter what the weather as I could block out the external conditions and just shoot. No more! I need mild exterior temperatures at least close to my age to function now so it was necessary to move indoors. While I have no problem seeing sights outside, indoor lighting makes it extremely difficult and I would expect these groups to be at least 30-percent tighter when shooting outdoors.

Of course, on the plus side this is more like what I would probably encounter if I ever needed the XD-M in a home defense situation and in that case 2″ groups do not look all that bad. Also this pistol is designed for competition shooting which normally takes place outside with plenty of available light. The chance of me ever shooting serious competition again is practically nonexistent, however I see this as a very practical Everyday Workin’ Pistol.

Springfield Armory supplies two extra 13-round magazines as standard equipment allowing a total of 40 rounds to be carried easily. To facilitate concealed carry a polymer paddle holster with an adjustable tension screw is provided along with a polymer magazine pouch holding two extra magazines which is also tension adjustable. A very sturdy lockable polymer carrying case is provided which accepts all these extras as well as the XD-M 5.25.

The left side of the polymer frame of the XD-M 5.25 contains the takedown lever as well as the slide lock. Takedown is easy. Remove magazine and lock the slide back ensuring the chamber is empty.

Editor’s Note: This article was written by John Taffin and shared with us by GUNS magazine. You can see the original article here.

Also, please be sure to check out the new The Armory Life Forum, where you can comment about our daily articles, as well as just talk guns and gear. Click the “Go To Forum Thread” link below to jump in! 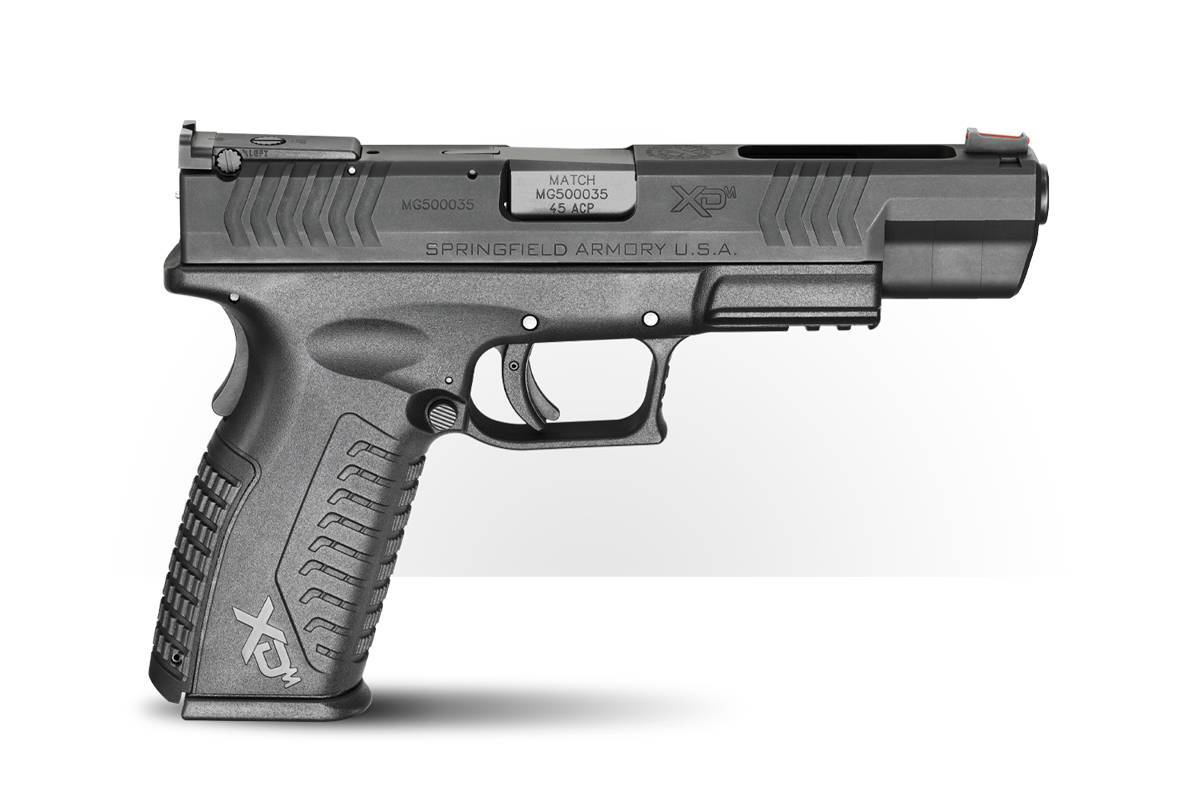