Roy Huntington, editor of American Handgunner, has some funny ideas. One is we writers should earn our remuneration. I had to look that word up in the dictionary. Another is we should at least have a minor knowledge of handguns developed in the 20th century. I do a lot with revolvers but not so much with autoloaders. That’s why he fixed it for Springfield Armory to send me a couple of Range Officer Models, one in 9mm and one in .45 ACP. Initially I had no idea what they were so I was happy when they turned out to be 1911s. “Good!” I thought, “My traditionally oriented brain gets along with steel and wood.”

These are not simple military-style 1911s. They have features bringing 1911s well past that year. Front sights on both samples are red fiber optic tubes set in a steel base, dovetailed to the slide so lateral windage can be adjusted. Both have extended beavertail grip safeties so they don’t bite. I just told a neighbor yesterday that when I take out one of my military 1911s I put a band-aid on the web of my hand before firing the first shot. It will draw blood. Grips on both are fancy cocobolo, deeply checkered, marked with Springfield’s logo and carrying the Range Officer name. Back straps of both versions are finely stippled and hammers are the bobbed sort.

After that these two pistols differ radically. The 9mm version is carbon steel given a phosphate finish usually called Parkerizing. It’s tinted black and not green like most American military firearms. Its barrel is stainless steel. Conversely the .45 ACP is all stainless steel except for the fully adjustable Micro-type rear sight and the steel base for the fiber optic front sight.

Rear sight on the 9mm is white dot cut also of steel and dovetailed to the slide for windage zeroing if needed. Obviously the .45 model is for precision target shooting while the 9mm version is more for the run and jump type of competition along with regular self/home defense or perhaps duty use. As befits that purpose it has a short rail in front of the trigger guard, machined integral with the frame. It also wears the name “Operator.”

As might be logically assumed, magazine capacity of a 9mm increases when put into the standard 1911 platform. This Range Officer Operator’s magazines hold nine rounds and it comes with an extra. The .45’s capacity is the standard seven rounds and it also comes with a spare. As also might be logically assumed, when a 1911 is crafted for a smaller cartridge than its original .45 ACP it gets a mite heavier. Although Springfield’s website says their unloaded weights are 40 and 41 ounces, I could feel that the 9mm had heavier heft. My samples actually weighed 40 and 43 ounces. The rail and extra thick 9mm barrel adds to the weight.

Along with the sturdy, foam-lined carrying cases most quality handguns come with nowadays, these two also come with synthetic holsters and double magazine carriers. Of course there is also the obligatory safety lock in both cases.

In examining both pistols prior to shooting I found them well made, well finished, smoothly operating 1911s. The only complaint I might make is one that accompanies just about every currently made handgun. That is, the triggers are too heavy. By Lyman’s digital trigger pull scale the 9mm’s averaged 5 pounds, 9 ounces and the .45’s was 5 pounds, 5 ounces. If I were to buy these handguns for myself that is the only feature I would have changed but they are very usable as-is, especially for defensive pistols.

Down at my shooting house I fired both pistols for groups at 25 yards with a wide variety of factory loads and handloads using both cast and jacketed bullets. Everything I tried slid through the .45 perfectly and it shot accurately with both jacketed and cast bullets. That said: it shot well with some jacketed and cast bullets. My homemade 225-gr. roundnoses from a Lyman mold #452374 were pitiful. I couldn’t keep all rounds on an 8″ black bullseye at 25 yards. Proof you should run different loads through any gun to find out what it likes best.

Conversely the 225-gr. roundnose cast bullets from Oregon Trail Bullet Company shot best of all things tried. Powder charge was 5.3 grains of Hodgdon HP38. As the photo shows it was just a bit over 21/2″ at 25 yards. As received, the Range Officer .45’s sights were zeroed high and a bit left at 25 yards. After group shooting a bit I adjusted them to give a dead-on zero. One good reason to have an adjustable sight.

Things did not progress so smoothly with the 9mm, but it wasn’t the pistol’s fault and gave us another lesson about ammo. It fed several factory loads perfectly. Then I began trying some of my cast bullet handloads. On the second shot the case did not eject and the extractor tore right through it. After punching it out with a cleaning rod — it came out reasonably easily — some more of that load were tried. After a couple of shots the same stoppage happened. Again the case was punched out. This time I examined it to find bright spots around the case head about 1/8″ ahead of the extractor groove.

The 9mm was then disassembled and rounds dropped into the chamber. Factory loads just kerr-chunked home. My handloads stopped before being fully chambered. This was a slight conundrum because I have a half-dozen 9mm pistols and two 9mm submachine guns and my reloads function in all. Those 9mm handloads were put together all on one press and it obviously was not resizing the cases enough for this particular chamber. Most of my other 9mm firearms have military chambers which are intentionally generous in size.

So again, this is not to mean the Springfield Operator 1911 9mm is at fault, at all. I say this to let it be a lesson to those who reload the 9mm. It’s up to the handloader to return his processed brass back to factory specs so it works in all 9mms across the board. Perhaps this is one reason self-defense/training experts advise people to only carry factory ammunition in their serious handguns.

Anyway, I can say that after opening an old box of Winchester 115-gr. Silvertips the Range Officer 9mm started to behave and shoot clusters. Either it preferred that type of load or it was getting broken in; I am not sure but it began shooting very well. No complaints at all when I got smart and stuck to factory loads! And one thing I can say for sure — this heavyweight 9mm is a pussycat in the recoil department. My arthritic hands liked it a lot!

Both of these Springfield Armory Range Officers are quality, heavy-duty pistols. They may be more weight than many people want to carry day-in and day-out, but they are built for lots of shooting. After firing groups for this article and ironing out the stoppage problem with my 9mm handloads a friend and I burned up more ammo with the two pistols shooting at steel.

Interestingly this friend had never fired a semi-auto pistol in his lifetime, having owned and shot revolvers since his teens. He quickly mastered the Range Officers and became reasonably proficient with them — displaying appropriate smiles while doing it!

Editor’s Note: This article was written by Mike “Duke” Venturino and shared with us by American Handgunner. The original article can be seen here. Also, be sure to check out The Armory Life Forum, where you can comment about our daily articles, as well as just talk guns and gear. Click the “Go To Forum Thread” link below to jump in! 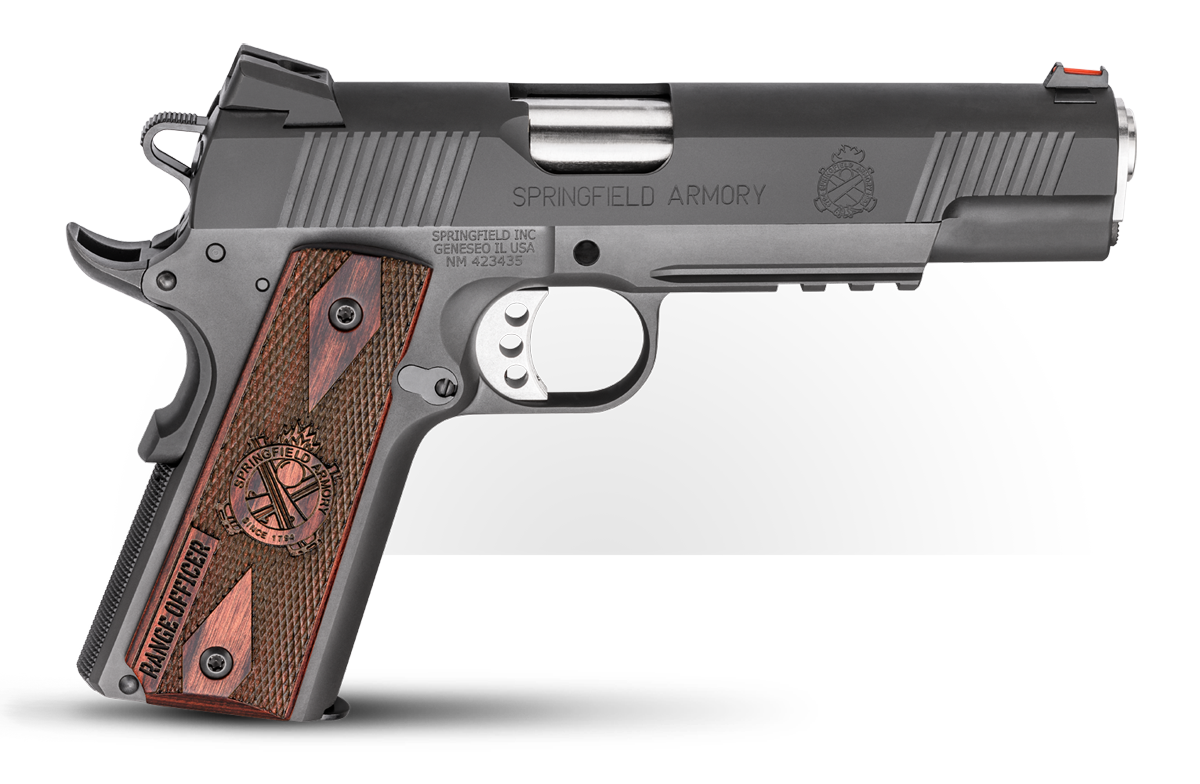 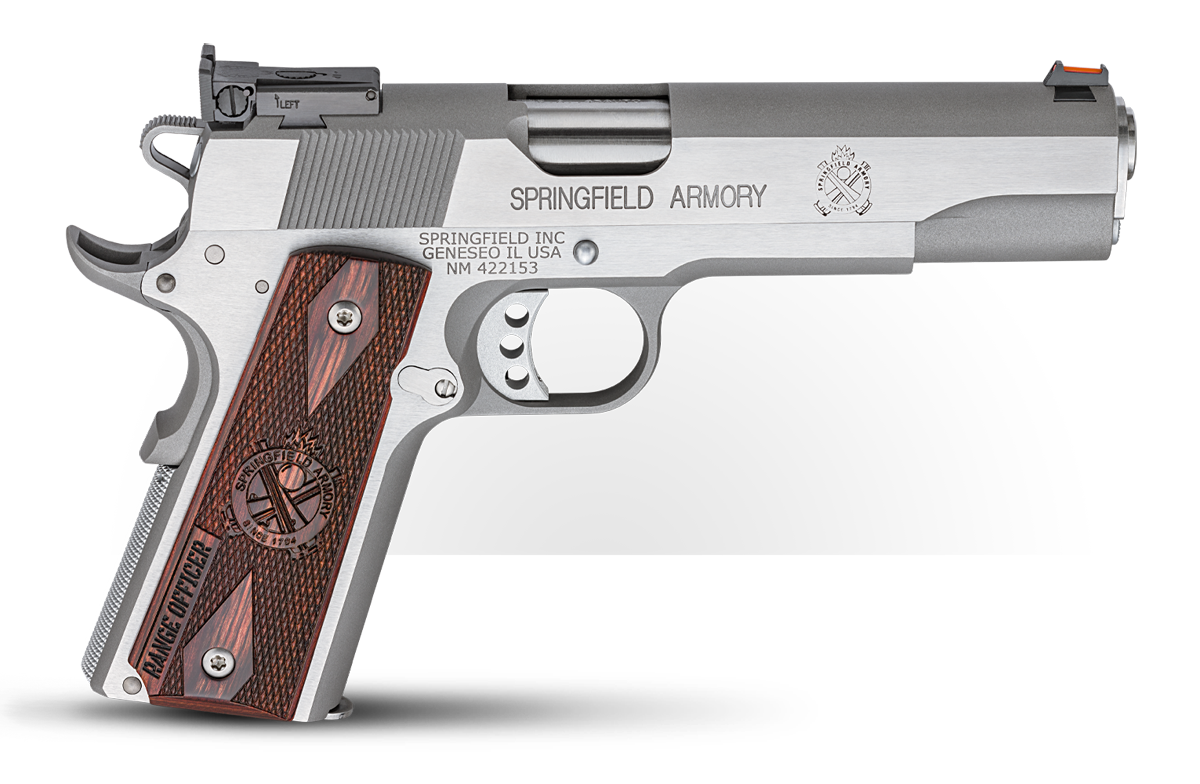