Which One’s the BB Gun?

I live under the ruthless and oppressive iron fist of a neighborhood association. For some reason, they get all torqued up when I practice things like rapid fire and shooting on the move in the backyard. Oh, and setting up a plate rack in the neighbor’s lawn? Forget it. Some people just don’t appreciate fun.

But seriously, unless you live somewhere no New Yorker would dare travel, you probably can’t train with your regular firearms at home. Even the low-end-of-the-ballistic-scale .22 LR is loud and flings bullets that can travel a mile or so. Definitely against the community covenants and restrictions, and probably a few laws.

Fortunately, there’s a solution that makes most everyone happy. Well, maybe not the homeowner’s association, but everyone else.

Airguns. Things have progressed since the classic Red Ryder. Today’s air pistols and rifles can be near indistinguishable from their centerfire siblings. Made of metal and other legit “real gun” materials, these airguns are modeled precisely after their louder and boom’ier likenesses. Carry an XD-M? No problem. Pick up an Air Venturi Springfield Armory XD-M BB pistol. Same size, same operation, and similar weight. It’s even got removable magazines and a reciprocating slide. And that’s just one example. Whatever your gun, there’s likely a solid air option.

So, what exactly makes these air-powered wonders home and yard friendly?

You have safe shooting venue choices with airguns primarily because they’re “lower power.” But what does that mean?

In the fire and brimstone world, we measure bullet “power” by kinetic energy and momentum. Kinetic energy, commonly labeled foot-pounds, is a measure of destructive energy. Think electric drill. It’s velocity-centric, so the faster a bullet, the higher the kinetic energy figure. Momentum measures the ability of an object to move another. Think bowling ball and pins.

Even if you upgrade to a .177 caliber pellet, we’re still looking at significant differences in energy. Most .177 pellets weigh between 5.25 and 8.5 grains — still substantially lighter than any .22 projectile. When fired from an air rifle, we might see velocities in the 600 to 1,000 feet per second range. That translates to kinetic energy ranging from about 5.7 to 12 foot-pounds. As for momentum, we can calculate an approximate range of .53 to 1.13 pounds-feet per second.

So, what does that all that mean? While we all know that a .22 will go a lot farther and penetrate a lot more than a BB or airgun pellet, the math illustrates exactly how much difference we’re talking about.

Airguns still make noise even though there’s no burning or exploding powder. That’s because most of the noise associated with guns comes from the high-pressure muzzle gas discharge saying “Yo! Hey!” to the much lower pressure ambient air. It’s the same concept as popping a balloon. There’s no pyrotechnic explosion there either but it still makes quite a noise.

However, thanks to smaller and lighter projectiles, less pressure is required to fling BBs and pellets, so that involuntary pressure mixer is much less dramatic and there’s a lot less noise. How much less? Enough that you don’t need hearing protection. I am talking about backyard calibers like .177 and .22 air products. Some big-bore stuff can get pretty loud, so check your owner’s manual when shooting the heavies.

Oh, one more thing. In the airgun world, suppressors (often called moderators) are perfectly legal. No paperwork. No tax stamps. No giving $200 to Uncle Spendy. In fact, a company can ship a suppressor-enabled airgun right to your door. While you usually don’t need that to protect hearing, the suppressors provide one more layer of protection against nosy neighbors and make indoor ranges even more ear-friendly.

We’re still launching projectiles, so even though they carry far less energy and momentum than center and rimfire ammunition, you still must wear eye protection. Heck, you should do that when mowing the lawn too. In the case of air products, pellets, and especially BBs, can bounce — even right back at you. Remember that old parental warning. “You could put an eye out!” It’s true, you can, so be sure to use eye protection and carefully obey all the standard firearm safety rules.

All of this translates to backyard-, garage- and basement-friendly shooting, assuming you take proper and reasonable safety precautions. You’ll still want a safe backstop. The good news is that it’s a heck of a lot easier to assemble a reliable backstop for pellets and BBs. A layer or two of old magazines, catalogs or newspapers will do just fine. If you want a pro-tip try this to minimize impact noise. Run out to Home Depot or Lowes and get a pile of Duct Seal Compound. It’s kind of like industrial Silly Putty. Stuff a bunch of that into an old frying pan or make a shallow wooden box and you’ll have a safe backstop that mutes the sound too.

So, go pick up that cool air gun and set up your indoor range. I know you won’t regret it! 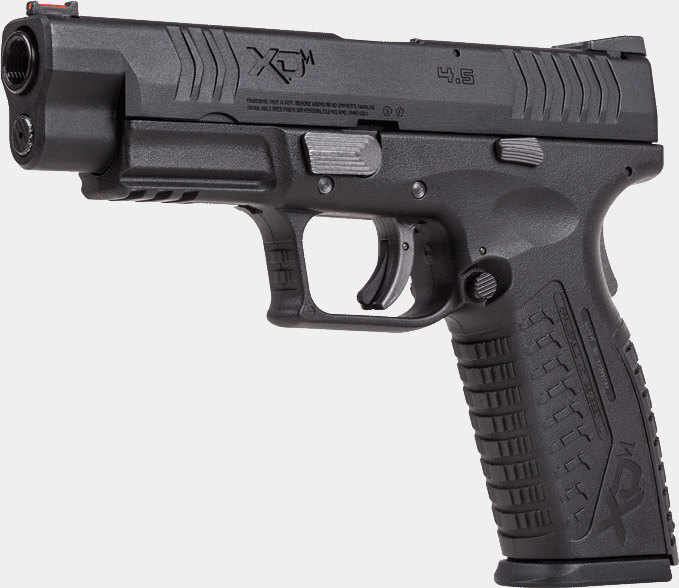 When the SKS Faced the M14