Perceptions of proper firearm ergonomics have changed significantly over the years. While the core foundational ergonomics of the 1911 design is solid and has held up well over the years, there are certain improvements over something like 1911-A1 that today’s shooters like.

Few 1911’s display this more clearly than the Springfield Armory Emissary. A familiar but very fresh-looking 1911 variant, this handgun ties together years of tradition with must-have enhancements to the platform. While there is a litany of improvements that were incorporated into the Emissary, the ergonomics of the gun are perhaps the most apparent — specifically, the texture on the slide, frame and grips.

There are few features, other than the cartridge fired, that affect the controllability of a handgun like the grip does. Grip length can play a large role in the controllability of a handgun, but the texture of the grip is arguably its most important quality when it comes to recoil management. A grip with little or no texture is substantially more prone to movement under the recoil of the handgun. Having too aggressive of a grip texture can cause some shooters pain, even within a short course of fire.

Some handguns feature generously textured grips but no texture on any other portion of the frame. While a gun like this may be very shootable, having all available areas textured can give even greater control and allow a shooter to achieve their best possible grip on the gun.

The Emissary nails these criteria with a creative and attractive texture layout. The grips themselves resemble the body of an Mk.2 hand grenade. They are constructed of G10 and are produced by VZ Grips. This means that they are exceptionally thin, further strengthening the shooter’s grip. Not only are the grips thin, but they are tough. They don’t sacrifice any structural integrity to achieve their low profile.

The entirety of the grip from top to bottom is covered in the “grenade pattern” texture. It sinks into your hand just the right amount. It’s not aggressive to the point of discomfort, but you certainly won’t forget it’s there when it comes time to grip the handgun. There is plenty of contact between the raised areas of the grips and the shooter’s hands. This is great as it gives the shooter more of an idea how firm of a hold they have on the gun during strings of fire.

The grip panels are not the only part of the Emissary to feature this pattern of texture. The texture blends seamlessly from the panels onto the forged steel frame of the handgun itself. The frontstrap, an area responsible for much of a shooter’s control over vertical recoil, features this texture. The backstrap/mainspring housing of the handgun also matches this same texture, meaning that it encompasses the entire grip on all four sides. The result is an unbelievably controllable 1911 platform handgun.

The supreme shootability partially granted by its grip texture is just one aspect of the Emissary’s ergonomic design. A good handgun must be easy to manipulate as well as shoot. The Emissary knocks this out of the park with a unique “tri-top cut slide”. The three large flat surfaces that make up the top of the slide offer more grip when manipulating the slide than a traditional circular-cut slide on a 1911.

The lightening cuts in the slide are also a big part of what makes the emissary so easy to manipulate during shooting. These cuts are striking and certainly more in the vein of modern defensive handguns. Their positioning makes them perfect for those who like to manipulate the slide from the front and top position, as is usually the case when executing a press check.  Additional serrations on the topstrap reduce glare and keep the tritium-powered front sight clearly in view even in overly bright conditions.

In the case of the Emissary 1911, the grenade shell grip texture and lightning cuts on the front of the slide give the shooter absolute control over the handgun. If you have the chance to pick up and shoot a Springfield Armory Emissary 1911, you’ll truly be able to feel the difference. 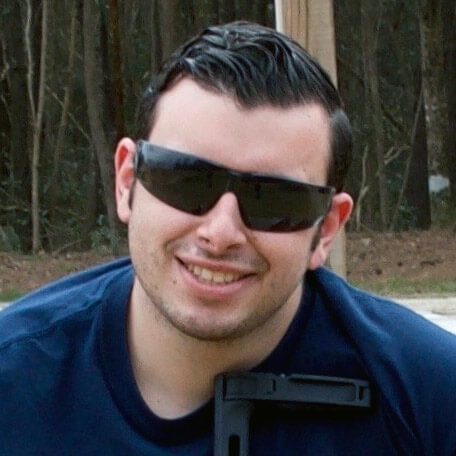