Do You Need a Laser?

Laser sights are a popular addition to handguns, with many gunmakers offering laser-equipped models in their catalogs and purpose-built laser units available on the aftermarket for most pistols. And there are good reasons (and bad ones) for their popularity.

A laser sight puts a dot on your target, so you can focus on the target rather than on the front sight of your handgun. This is helpful, as your eye wants to focus on the target. It also makes it easier to observe the target, which in a defensive scenario is extremely important. The attacker could move, could surrender or could initiate some motion that requires you to react. Having your point of aim on the target can shave a fraction of a second off your reaction time, which could prove vital.

Another advantage to the laser is it provides the ability to know where your round will impact without having the pistol in the ideal shooting position. Most criminal attacks — especially those outside the home — occur at very close range. We’re talking inside of three feet. Criminals don’t yell “I’m mugging you!” from 25 yards away; they get right up on you and attack from contact distance when you won’t have much time to react.

This fact can mean it’s impossible to draw that Hellcat from your IWB holster and bring it to a proper, two-handed firing position with the arms extended. You may be forced to shoot from retention, which means not using your sights. Now, at a foot away, it will be hard to miss, but a laser gives you the ability to shoot and be confident of your point of impact at any point in the draw stroke.

Also, the dot itself can serve as a warning. Thanks to Hollywood, everyone knows what a little red (or green) dot means. It could make an attacker rethink his life choices, or at least his victim-selection process. I wouldn’t rely on that deterrent, but it does exist. Some will argue that the laser gives away your position. This is true, and it matters a great deal if you are a Navy SEAL assaulting an oil rig to rescue hostages in the wee hours of the Persian Gulf morning. However, it’s not likely something to worry about when defending yourself against a common criminal.

For these reasons, laser sights have become an integral part of many shooters’ defensive handgun, but a lot of folks don’t know how to use them properly.

I personally prefer the laser to be visible directly above my front sight as opposed to being perfectly co-witnessed with the irons. While perfect co-witnessing might be comforting from an accuracy standpoint, the point of the laser is to see it on the target. If it is zeroed so your front sight blocks it, much of its efficacy disappears. I find having the laser appear just above the front sight allows me to see it while also being able to use my pistol sights as I’ve trained to for years.

Besides maximizing the advantage of the laser, this approach minimizes the concern of the laser sight’s batteries dying or the unit otherwise malfunctioning. If the dot is normally right above your Ronin’s front sight and you use it in tandem with your iron sights, in the unlikely event of a laser failure, you are still ready and able to deliver an accurate shot.

Which leads to another common misconception concerning laser sights — the notion that they are a substitute for iron sights. They are not. Rather, a laser is a complementary advantage that works in tandem with your handgun’s sights. It is a bonus that can be extremely valuable in helping you deliver accurate fire quickly, but it is not a substitute for iron sights or a crutch for poor shooting fundamentals.

Think of it like all of the great new safety additions to cars. The backup camera and blind-spot warning devices are wonderful tools that help us avoid crashes, but they do not replace the driver, nor are they designed to let you ignore your surroundings. You still need to look out back when reversing to ensure the area outside of the camera is clear, and you still need to check your blind spot for another vehicle. The technology merely adds to the tools you have to be safe, and a laser sight is no different.

Finally, the distance at which you should zero your laser will be different based on the purpose of handgun to which it is mounted. For example, on my Range Officer that I keep in my bedside safe, I zero the laser for the longest line-of-sight distance inside my house, which is about 35 feet. That means that the point of impact will be right on the dot of the laser at 35 feet. Inside of that range, the point of impact won’t be much different (likely less than the diameter of the bullet, but certainly no more than an inch), meaning I can confidently know that for any shot inside my house, the bullets point of impact will almost exactly match the laser’s dot.

I would choose a different range for my XD-S, since I carry that pistol outside the home and may need to take a longer shot. Ultimately, the zeroing distance is up to you and your individual needs based on the pistol itself and your circumstances.

Laser sights are an extremely useful tool to add to your handgun, but learning how to mount, zero and use them is paramount. They are not a substitute for skill or for iron sights, nor will they make you into Rob Leatham. When used properly, however, they will make you more confident, accurate and fast should you have to defend yourself against a violent criminal attack. 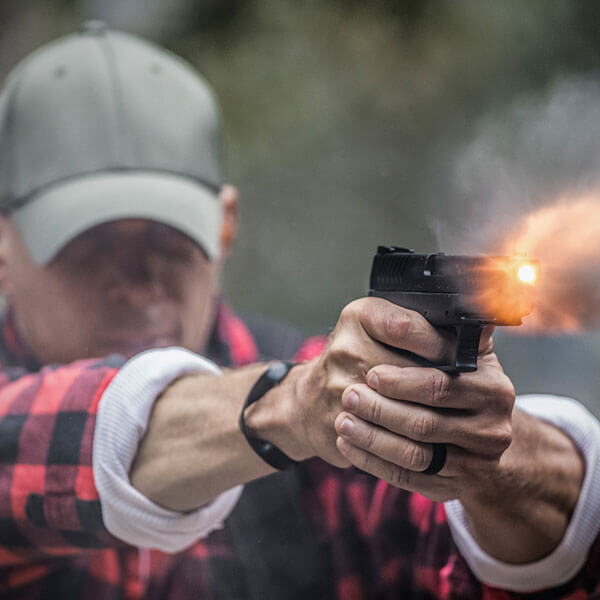 Joe Fisher has worked in various positions for multiple companies in the firearm industry for nearly two decades. He is a graduate of Gunsite Academy, Thunder Ranch and numerous other shooting schools. Fisher is an NRA Certified Instructor and Range Safety Officer.