I’m embarrassed to admit what I paid for my first laser sight back in the day. That thing was as big as a paper towel tube and cost as much as a decent combat handgun. Nowadays advances in microelectronics have made lasers both reasonably priced and ubiquitous. Want an example? How about the Viridian E Series, which nicely balances features and cost.

The older I get the better I was. As I barrel through my fifth decade, a toxic combination of shady memory and fortuitous lack of photographic evidence conspires to make me into John Rambo’s revered mentor, at least to my recollection. I remember that I was once strong, tough, bulletproof and immortal. I had eyes like a hawk, and the reflexes of a rattlesnake. Alas, reality might have been slightly different.

What drives me nuts, however, is that age is indeed robbing me of much of what I once took for granted. My creaky knees prevent me from running, while my grey hair keeps me honest. The worst bit, however, is my eyesight.

It’s called presbyopia, and it happens to most all of us. The lens in your eye gets stiff and will no longer accommodate both up close and far away. Practically speaking, this means we seasoned gunmen can no longer focus on our front sights. Fortunately modern technology comes to the rescue.

Viridian makes world-recognized, top-end sighting and illumination solutions for a wide variety of combat weapons. While they offer universal-fit products for standard Picatinny rails, they also manufacture custom lights and lasers sculpted to fit your host gun perfectly. Their products range from inexpensive to not so much. Today we shall explore their very affordably priced E Series.

I use a Viridian laser on my Springfield Armory XD-S Mod.2. The XD-S is a superb single stack concealed carry pistol offered in 9mm, .40S&W and .45 ACP. Featuring a bilateral magazine release and peerless reliability, the XD-S is purpose-designed to be a part of your everyday ensemble.

The Viridian E Series laser designator for the Springfield Armory XD-S comes in a lightweight but rugged thermo-molded polymer housing and offers six hours of constant operation on a single battery. The range is listed as 25 meters in daylight and one mile at night. I entertained my kids in the old days bouncing the dot from my old spendy laser off of a distant water tower. This inexpensive Viridian sight does the same thing at much lower cost.

Activating the sight couldn’t be easier. A bilateral red pushbutton offers instant “on” and “off.” In a crisis it can be tough to keep track of the little things. With the Viridian E Series you just press and go. The sight turns itself off if left unmolested for five minutes to save the battery.

Zeroing the laser can be done indoors from the comfort of your recliner. Just level the pistol’s sights at the range you want to zero the laser and adjust the dot to the same spot with the Allen wrench. Keep in mind that the laser is offset from the sights so it will only converge at a single point. However, this difference is typically so mild it doesn’t make much difference at reasonable engagement ranges. I set mine for seven meters.

It really couldn’t be easier. Just tap the button and put the dot on your target. Squeeze the trigger and enjoy previously unimagined precision despite any age-related infirmities. I have replaced the batteries in mine twice, and it has never missed a beat. If you do use such a device for real-world daily carry, I’d suggest you swap the batteries on a certain recognized holiday every year whether they need it or not. That way it’ll be ready when you need it.

The addition of the Viridian E Series laser to your XD-S does necessitate a dedicated holster. Most holsters these days are carefully formed to the intended gun, and the trigger guard-mounted laser housing interferes with that. However, the Viridian website offers a wide selection of top quality concealed carry rigs, all of which are designed to accommodate their attachments along with your favorite gun.

Getting old is both unfortunate and inevitable. However, nothing says you have to age gracefully. The Viridian E Series keeps old guys dangerous and makes young shooters better. With the Viridian E Series laser sight and a Springfield Armory XD-S you can remain prickly no matter how seasoned you might be. 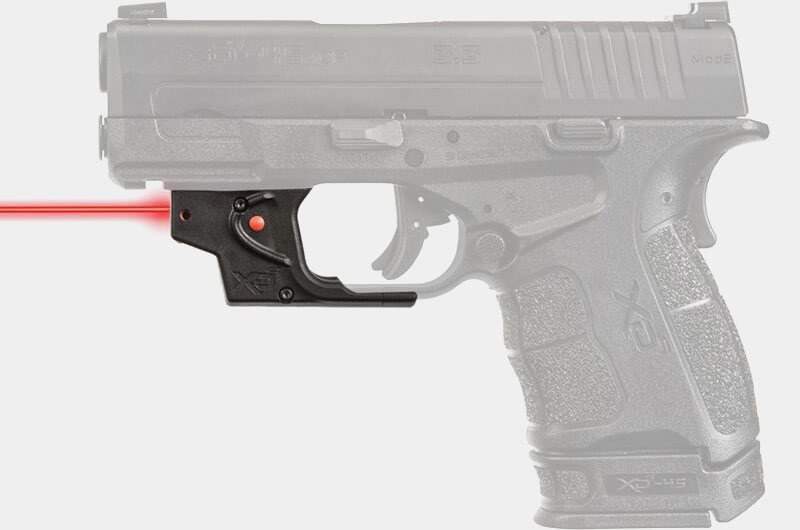 What Did Santa Forget?