The genius of John Browning can be seen not only by the fact his basic 1911 design is still going strong after more than a century, but also because so many things have been done to it and continue to be. It has been chopped, channeled, expanded, downsized, chambered in everything from .22 to .50, and shows no signs of slowing down. Today, some of the finest and most innovative 1911’s are coming out of Springfield Armory.

A few years back Springfield Armory took their basic 1911, added match-grade barrels, excellent adjustable sights, left off all useless frills, and the result was a 1911 which could be used as a competition pistol right out-of-the-box. They called it the Range Officer.

Thousands of folks carry a 1911 on a daily basis. For me least, the 1911 is just about the upper-level for a concealed pistol. Yes, it is certainly more comforting than comfortable. Now Springfield Armory has addressed this situation by turning the Range Officer into an easier to pack and conceal 1911. Available in both .45 ACP and 9mm, the Range Officer Compact Model basically is a shorter Commander slide mated up with and Officers Model grip frame. The result is a much smaller and easier to conceal pistol. Barrel length for concealment is not nearly as important as the grip frame. With this smaller grip frame, there is much less chance of the butt of the pistol printing on a jacket or shirt.

Since it is called the Range Officer Compact Model, you might think it would simply be a Range Officer, which has been shrunk to a smaller size. This is not the case as changes have been made both externally and internally. The most noticeable change, of course, is the shorter slide and shorter barrel, which now measures 4 inches, and the much smaller grip frame. Since the frame is smaller it was necessary to also down-size the magazines. The result is that these .45 ACP and 9mm Compact Models hold 6 and 8 rounds respectively, making them 7- and 9-round capacity pistols.

The fully adjustable competition-style sights of the full-size Range Officer have been replaced with sights more conducive to concealed carry. These self-defense sights are composed of a low profile “combat” rear in a dovetail which can be adjusted for windage, while the front sight, also in a dovetail, is a red fiber optic. The square notch of the rear sight has a white dot on each side so these sights pick up very quickly, even in low light.

Looking inside we find more than just the reduced capacity of the magazine. The Compact Model has a full-length guide rod instead of a bushing. Since there is no bushing, the stainless steel barrels of the Compact Models are tapered at the muzzle for a tighter fit in the slide. The forged lightweight alloy frame is matched up with a steel slide which are of the same material and precision as those found in their Trophy Match 1911.

The barrels on the Compact Model are also of a bull barrel configuration, which helps to put a little more weight at the front end of the pistol. The beavertail grip safety has a memory bump, the flat mainspring housing is checkered making for a secure grip, and the trigger is the lightweight style and extended. Trigger pulls on both the .45 ACP and 9mm Compact Models are smooth and creep free and seem lighter than the measured 4-3/4 pounds. The thumb safety on the left side is striated for positive operation. The standard-style magazine release is the on the left side and operates very positively.

Hammers on both models are Commander-style and, when cocked, fit in a groove in the top of the beavertail so there is no chance of your hand being pinched. The slides have slanted serrations below the rear sight for easy manipulation. The two versions, .45 ACP and 9mm, are virtually indistinguishable at first glance, however each is marked on the left side of the slide with the designation: “COMPACT CAL .45” or “COMPACT CAL 9MM.”

Normally the first thing I do with any sixgun or semi-automatic is check the quality, size, and fit of the grip panels, which normally results in my changing them. It is almost impossible for me not to change grips or grip panels on every sixgun or semi-automatic I have. I do have possible replacements, however the grip panels on the Compact Models are well carried out. They are slim, which aids their concealability. They also fit well and are of the double diamond checkered variety, adding to security when shooting. Possible replacements I have are smooth wood but in this case I prefer the checkering. Material used in their construction is cocobolo. Each panel has the Springfield Armory logo in the center and the words “RO COMPACT” along the bottom backside of each panel.

As with other Springfield Armory pistols the Compact Models come in an exceptionally sturdy, lockable padded case which not only holds the pistol in a padded cut-out, but also an extra magazine, a bristle brush, a Springfield Armory polymer holster, and a polymer magazine scabbard to hold two magazines. Each Compact Model comes with two magazines, so if the scabbard is going to be used an extra magazine or more should be ordered from Springfield Armory. The magazines for the .45 are blue while the 9mm versions are stainless steel. Also included in the case is a “refill” for the fiber optic front sight.

Both of these pistols performed flawlessly with factory loads and handloads. With the .45 I test-fired nine different loads and I had so much fun with the 9mm I fired more than two dozen, again both factory and handloads. This was also my first time to try some new bullets from Acme Bullet Company. These are Hi-Tek Coated bullets and have a red color which make them look like lipstick when they are loaded in brass cases. With both of these pistols weighing approximately 30 ounces, I expected the .45 ACP Compact Model to exhibit the most recoil and also talk to me more than a full-size 1911. It did, however it was easily manageable. My best shooting factory loads turned out to be HPR’s 185- and 230-grain JHP. The Liberty Civil Defense 78-grain bullet with a huge hollowpoint clocked out at over 1,850 fps and was frighteningly destructive on gallon jugs of water. My most accurate reload was the Hornady 230-grain XTP loaded over CFE Pistol powder which resulted in 1-inch groups at 20 yards.

The .45 ACP was fired with all loads at 20 yards, however I moved into a more reasonable self-defense distance of 7 yards for all loads from the 9mm. It showed a real propensity for placing the five shots in very small groups at this distance with many of the groups being below 1-inch. I especially had excellent results with my handloads with the Acme red-coated bullets all shooting exceptionally well and the Rainier 124-grain JHP and CFE Pistol turning in the tightest group with five shots in 5/8 inch. I also tried the Liberty Civil Defense 9mm load, this time a 50-grain hollowpoint which clocks out at an astounding 2,000+ fps and is totally devastating on gallon jugs of water. Again, all the test results are in the accompanying chart.

Both of these Range Officer Compact Models perform so well I am faced with a dilemma… namely, which one should I choose? Long ago I learned in a situation like this there were three words that matter: “Buy ’Em Both!”

Editor’s Note: This article was written by John Taffin and shared with us by GUNS magazine. You can see the original article here.

Also, please be sure to check out the new The Armory Life Forum, where you can comment about our daily articles, as well as just talk guns and gear. Click the “Go To Forum Thread” link below to jump in! 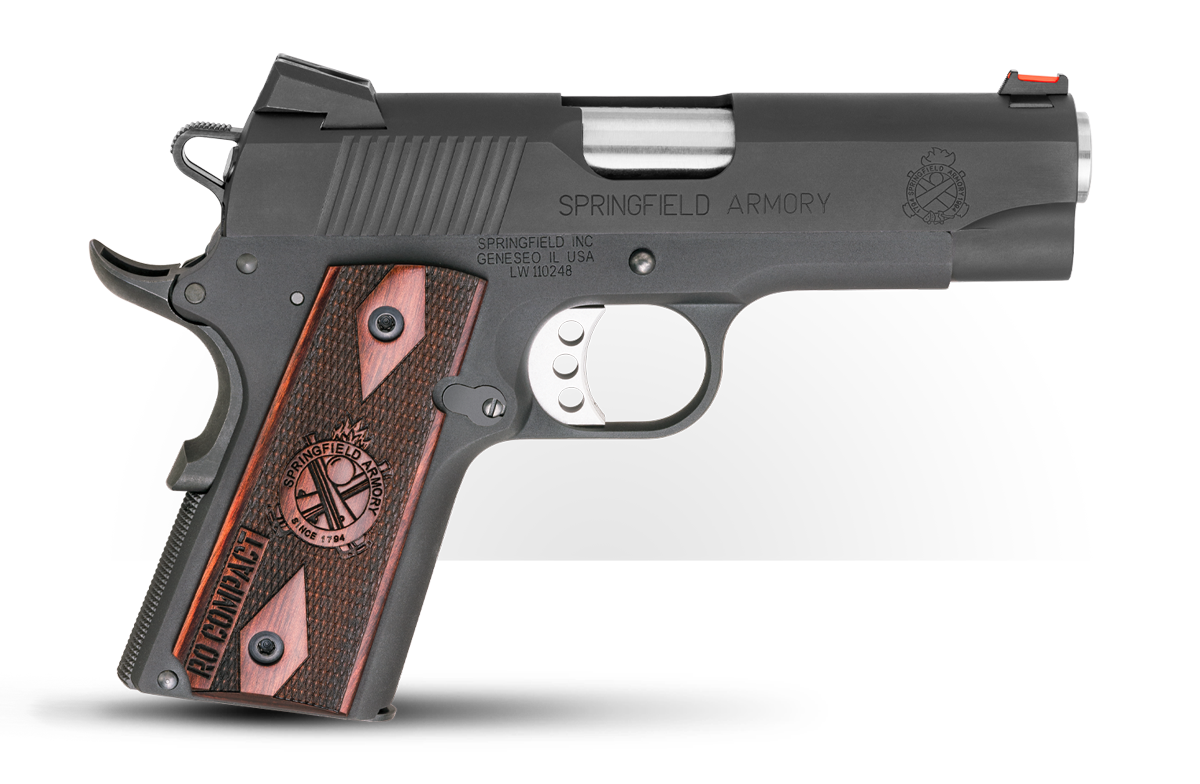 A Handful of Compact Firepower