I’m lookin’ for a word here and can’t find it. What’s the right word to describe something really cool; something with terrific potential — but you can’t quite wring that coolness out of it? A word for something punching your happy button and at the same time frustrating the livin’ kapok outta you? No, “wife” isn’t it, joker. “Bittersweet” comes kinda close, but that implies more bitter than sweet, doesn’t it? And “sweetbitter” is stupid. I might have to make one up. Maybe, umm… “Switterbeet”? Nah. Gotta think on it some more.

For me, that’s Springfield Armory’s Range Officer 9mm. Beautifully built, sweet-shootin’, prime for punchin’ pretty cloverleaves in paper — but. It’s like this; I’m at the 25-yard line with two regulation Bullseye targets on the rack, strikin’ my best one-handed, heads-up, Serious Shooter Here pose, squeezin’ off rounds, and I’m pretty pleased with myself. I could cover my group with my open hand. Then one of the club’s dedicated Bullseye shooters saunters up.

“Hey, izzat the new RO nine?” he asks, and “CannIshootitCanniIshootit CanniIshootit pleasePLEASE?” I handed him the pistol and a mag. He snaps into a perfectly locked Bullseye stance like a robot. You could balance a carpenter’s level on his extended arm. I could almost hear his left eye click shut and his right peeper whirr into fine-focus. Then, Pop. Pop. Pop. Pop. Pop. — like he’s got an atomic timer implant. His group — more like, his hole — ran from the left side of the 10-X circle to the edge of the 8-ring. A fat baby’s fist could cover it.

“Sweet! Nice gun!” he beamed. “Gotta get one! Sights need adjusting though. Could come right a click or two.”

I tossed my target — and my dignity — into the trash barrel, got a sandbag to rest the Range Officer on, and went back to work, 2-handed. I did okay there, but felt like I was puttin’ training wheels on a racing bike. Switterbeet.

Perfect For Its Purpose

If I had to describe the Range Officer 9mm in one sentence it would be “A high quality full-size 5″-barreled baseline 1911 upgraded and outfitted for instruction and competition.” Since I think that’s what Springfield’s goal was, I conclude they nailed it, and delivered terrific value for the price. I’d say it’s an excellent choice for a hard-working trainer who does a lot of demo shooting for classes; one who sometimes needs to put it into a student’s hand for personal coaching, and, one for established good shooters getting serious about competing. Seems to me Springfield included the core essentials of their Trophy Match pistol, leaving out some non-critical extras which would add hundreds of bucks to the price.

The thick, heavy barrel — thicker because it’s sized to occupy the same space as a .45-bore — is match-grade. The extra weight, which lies forward of the triggerguard, also complements accuracy. The integral ramp assures smoother, more reliable feeding. The barrel bushing is also match-grade and hand-fitted. The slide-to-frame mating is snug and smooth throughout its travel with no detectable tighter or looser areas. Slide manipulation grooves are almost too fine to be called “grooves,” but they’re cut with aggressive enough edges to provide a firm purchase.

The strength necessary to manually retract the slide is surprisingly light — maybe half the resistance of my .45 slides — because the 9mm’s recoil force is so much less. That’s just one more factor making the RO 9 a fine choice for anyone who struggles with too-stiff recoil springs. The ejection port is enlarged and beveled.

The dovetailed rear sight is fully adjustable for windage and elevation and purposely made easily adjustable for on-the-fly changes during matches. Spring-loaded detents keep your settings in place. The big rear sight “billboard” is fine-line scored to reduce glare and angled slightly back for even greater glare reduction. Its U-notch is wide enough to accommodate the right amount of sunlight between the sides of the dovetailed, square-topped front sight, but not open enough to invite a sloppy sight picture.

The lightened, fast hammer is skeletonized and at full cock/full recoil it nestles deep into a gracefully upswept and substantial beavertailed grip safety. A pronounced “memory bump” assures disengagement. The match-grade long aluminum trigger contains no artificial sweeteners; just pure sugar. There’s about 1/8″ of takeup, and although the spec sheet lists trigger pull at 5 to 6 pounds, ours gauged a very consistent 4 pounds 4 ounces to 4 pounds, 6 ounces — crisp! Reset is short, positive, tactile and audible.

The flat mainspring housing is fine-checkered, and the magazine well isn’t flared but nicely beveled. Two stainless steel 9-round mags are supplied, and ours locked up and dropped free consistently. Cocobolo grip panels are very nicely checkered and feature the Springfield crossed cannons design. They feel secure in the hand and look handsome against the flat non-reflective finish.

Here’s where Springfield saved the money: Neither the thumb safety or magazine release are ambidextrous. They’re set up for right-handed shooters, a condition which can be remedied for lefties. There’s no fine checkering on the front strap or press-check grooves on the front end. The slide and frame are forged carbon steel rather than stainless, and Parkerized rather than highly polished. The only place you’ll find a high state of polish is inside, where it really counts.

Aside from saving some hefty bucks on the purchase price, consider the ongoing savings involved in feeding this pistol 9mm instead of .45 ACP. All of that’s okay with me, and odds are it’s just fine for you too. What you get is a pistol that will run, rock and rule the range right out of the box — and shoot better than you can hold it. Well, better than I can hold it, anyway.

I handed the RO 9 to my son, who shoots .45’s almost exclusively, and his 9mm’s are compact and subcompact lightweights. He put a mag-load through it and turned with a big goofy grin on his mug.

“Dad!” he blurted, “This shoots like a squirt-gun!” That about sums it up. The RO 9 may be too big and heavy for daily concealed carry for most people (to see how another of our contributors decided that a full-size 9mm 1911is a good option for CCW, click here), but dang, the weight, the balance, the size and sight radius combine to make it an eminently soft-shootin’ — and straight-shootin’ — powder puff.

Ammo shot “for record,” including chrono data and groups, was limited to two loads: Hornady Steel Match 125-gr. HAP, and Winchester Target 147-gr. flat nose FMJ. Average group overall for both loads was about 2.2″, with a “best group” from the Winchester 147-gr. of 1.56″.

For function, action and snap-shooting drills I ran everything from Sellier & Bellot 115-gr. FMJ through Hornady’s superb 135-gr. Critical Duty FlexLock to Federal’s hard-hitting 147-gr. HST Tactical. The RO 9 eagerly digested all of ’em without a hiccup — and with very little difference in the already significantly low recoil effect.

The RO 9 having already proved its accuracy during these drills, showed itself to also be a capable action-shooter. Given its weight and muzzle-forward balance, you might assume it could be slow to swing and difficult to stop on-target, especially when rapidly engaging multiples. That was not the case. She was sure and solid in the hand and quick doubles stayed tight. I came out of it thinking the RO 9’s creds as a fighter and a bedside boomer are solid too.

On a final note, this is a great gun for training people new to handguns, or transitioning from revolvers to autopistols. Consider this: Train on a 1911’s mechanical systems and others will seem like a piece of cake. The single-action-only trigger is ideal for teaching proper trigger pull, and at a bit over 4 pounds, it is neither too heavy nor too light. The RO 9’s recoil certainly won’t prompt flinching, slide manipulations are easy, the grip is hand-filling but won’t be a stretch for most students, and best of all, this adds up to confidence-building rapid improvement. The Range Officer is aptly named, all right.

Editor’s Note: This article was written by John Connor and shared with us by American Handgunner. The original article can be seen here. Also, be sure to check out The Armory Life Forum, where you can comment about our daily articles, as well as just talk guns and gear. Click the “Go To Forum Thread” link below to jump in! 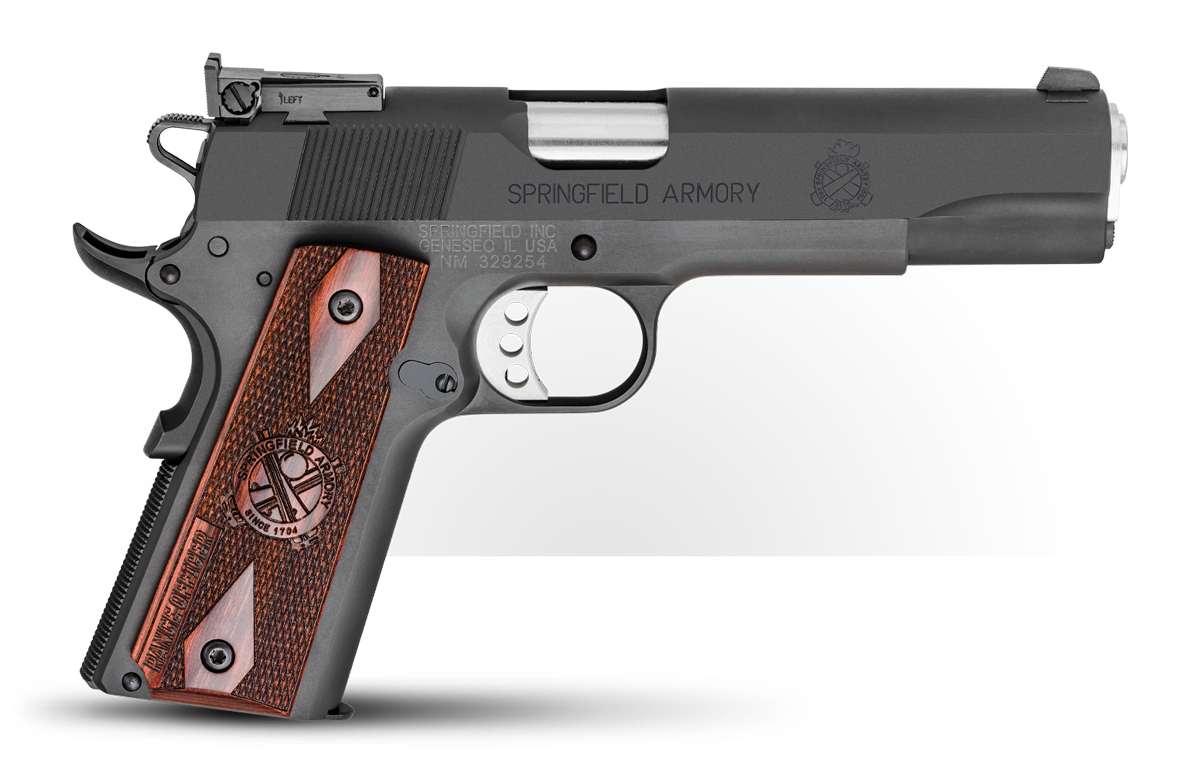