Your Next Multi-Tool? The Leatherman OHT

For many, the word “Leatherman” has become the standard in multi-tools. Whether you’re a hunter, a gunsmith, a member of the military or even a first responder, there’s a multi-tool built specifically for you.

The 16-tool OHT is designed to be a 100% one-hand-operable multi-tool, combining one-hand opening blades with one-handed sliding pliers. According to Leatherman, this is the first multi-tool to combine these two features.

While the OHT is designed for users such as military personnel and first responders, the ability to deploy tools with just one hand makes this worth looking at for just about anyone — even fishing enthusiasts or boaters. Spoiler alert — after testing one of these out, it’s now part of my permanent EDC.

The OHT lives up to its promise of one-handed operation; every tool can truly be deployed with one hand right out of the box. Even as a female with smaller hands, I had zero issue using all of the tools effectively.

Speaking of the tools, here’s a list of everything you get with the OHT:

There are imprint diagrams on the handle scales as well, so you can see where each tool is located. That’s a nice feature when you first get the OHT and are trying to familiarize yourself with it, but it’s also convenient if you need to deploy a tool by feel in the dark.

There’s a lock on the pliers to keep them from sliding out unbidden, and you’ll need to have that lock engaged in order to deploy some of the other tools. The good news is that, just like everything else on the OHT, you can run the lock with one hand.

There are two blades on the OHT — a straight blade and a serrated one. Both are made from 420HC stainless steel and as long as you use them for their intended purpose (e.g., don’t dig holes with them), they’ll stand up to heavy use and keep their edge.

Along with the standard knives and screwdrivers — a Phillips head and three flatheads — the OHT has a few specialty tools as well that are perfect for first responders. The strap cutter easily handles seat belts, canvas and other fabrics. There’s also an oxygen tank wrench that EMS personnel will find useful, and the OHT also includes a cleaning rod holder for firearms.

No multi-tool is perfect, nor will it ever be the be-all, end-all for every person. The OHT isn’t for everyone, and in order to provide what it does, it had to sacrifice a bit in other areas. It is a specialized tool for specialized needs.

While it’s one of the larger multi-tools on the market, that doesn’t translate to bigger blades. In fact, the two knives on the OHT are smaller than you’d expect — only 2.37″. For most people, this will still be just fine, but if you’re planning to use your OHT in the woods keep in mind these blades won’t handle anything bigger than 1″ thick at the most.

As mentioned earlier, there are 16 tools on the OHT. While that’s not necessarily a small amount, it’s also evidence of the design decision Leatherman had to make regarding the location of the tools to facilitate one-handed operation. The number of specialty tools on it means that if you’re not a first responder/military or have use for those special tools, you might be better off looking at a different Leatherman product with an array of tools more suited to your needs.

The last relative downside to the OHT is the lack of a clip or attachment feature. Your choices for carrying are either using the included sheath on your belt or putting it in a pocket. While the pliers do stay locked, the OHT is large and heavy enough to do some damage to your pocket over time.

Overall, the OHT is a solid addition to the Leatherman line up. It’s rugged, with the high level of craftsmanship you expect from the company, and while it’s more geared to a specific group of users, plenty of folks will find the one-hand operation to be convenient and worth the price. It won me over! 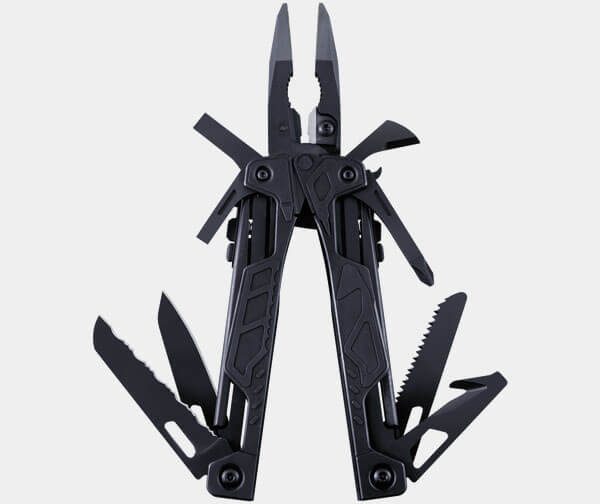