And here we go again… another debate comparing the 9mm and .45 ACP cartridges.

You already know that you can’t go wrong with either of these classic calibers. But it’s a debate that continues to create controversy among shooting enthusiasts everywhere.

Each round has its pros and cons when compared, yet each remains a staple among firearm fans. In this article, we break down the advantages of each in terms of:

Let’s not waste any time and dive right in.

When comparing the two cartridges, recoil is one of the first considerations many people bring up. In this category, the advantage belongs to the 9mm.

In head-to-head 9mm vs. 45 recoil testing, the 9mm is clearly easier on the hand:

It is easy to see that the 9mm recoil is substantially less than that of its larger bore cousin. In fact, the .45 ACP recoil is nearly double that of the 9mm when launched from a similar pistol.

Size and weight of the gun matter when calculating recoil. For example, a .45 launched from a carbine will have less felt recoil than a 9mm shot from a subcompact CCW pistol.

When launched from similar guns, the recoil advantage will go to the 9mm. For example, although the above calculations were made from the XD-M line of pistols, you could measure 9mm vs. 45 1911 recoil and come to very similar figures.

Pair the lesser recoil energy with the weight of a full- or mid-sized pistol, and handling will prove to be comfortable and pleasant when shooting the 9mm. And this combination is also a perfect gun for brand new shooters to start with.

If you don’t want to go broke buying range ammo, then 9mm has your back. Due to its prominence among our military and law enforcement communities, and popularity with civilians, the 9×19 is the most commonly encountered pistol round worldwide.

This and the relatively small amount of material used in the manufacturing process also makes 9mm the most economical center-fire pistol round currently available.

Thanks to the large supply, you also shouldn’t have a problem finding 9mm ammo, as there are a large number of manufacturers pumping it out. You will find ample quantities everywhere from big-box retailers to even the smallest local gun shop.

So, for 9mm vs. 45 price, the advantage goes to the smaller round again. If cost is a concern, keep this in mind.

When it comes to personal defense, the 9mm is more than ready to do the trick, especially with hotter +P hollow point loads. Its lighter recoil makes follow-up shots quicker, and the smaller size gives 9mm pistols additional capacity.

Additionally, there are more concealed carry pistols made in 9mm than in .45 ACP. You are therefore more likely to find a pistol that fits your needs in 9mm. For example, the wildly popular Springfield Hellcat is only available in 9mm – .45 is not even an option.

Team Springfield SME Ivan Gelo is a huge fan of the .45, but knows that much of the comparison bullet “data” stems from bullet performance technology that is over 25 years old.

Like most tools, equipment and devices, bullet technology has grown by leaps and bounds during that same period, especially in the area of 9mm performance.

Ivan says, “Old 9mm technology was related to the .45 and the concept of the heavier bullet; hence the widespread use of the 147 grain 9mm bullets. With advances in technology though, the more common 9mm 124/125 grain +P (increased velocity) loads have substantial stopping power. So with greater mag capacity and the lighter ‘carry’ weight, the 9mm benefits are easy to argue.”

If you have any physical limitations, i.e., carpal tunnel, tendinitis, loss of hand strength, etc., Team Springfield shooter Kippi Leatham recommends the 9mm over .45 without question.

“I shot larger calibers through many of my competitive years. My first competition gun was a 1911 .45 – and I loved it! Eventually though, over several decades, I developed tendinitis in both elbows. With continued proper strength training and a decision to shoot exclusively 9mm pistols, my elbow injuries are no longer an issue.”

So if you have physical limitations or pain, don’t continue to damage your body or create discomfort in exchange for greater stopping power. In Kippi’s opinion, a well-trained, competent and confident 9mm pistol owner is easily able to defend him or herself should the need arise.

The terms “stopping power” or “knockdown power” are concepts popular with the self-defense crowd.

The .45 regularly is considered to have more stopping power than a 9. It’s a big reason why it was adopted alongside the 1911 for U.S. military service back in the day. While its velocity is slower than 9mm, what you lack in FPS, you more than make up for in a larger and heavier projectile.

Note – Not all of us agree about the stopping power of the .45 vs. that of the 9mm. You should also read Fred Mastison’s article “What is the Best Caliber for Self-Defense” for another perspective.

To its fan base, the .45 is the best round for law enforcement and personal / home defense and while the .45 does obviously have more recoil than 9mm, that is the cost of increased power.

Curiously decades later the US Military also adopted the 9mm and widely replaced the .45 with it, but for more reasons than power alone. Many Spec Ops groups did not change, and retained the .45 for its greater power.

Team Springfield Captain Rob Leatham says, “My position on this subject is well documented: I like the .45. While currently, I do shoot more 9mm in competition than anything else, it’s because of the rules and subsequent advantages the lower-powered, lighter-kicking 9 has. For defensive use, especially in a mid- or full-sized, easily controlled pistol, I would choose the .45 every time.”

From the Prepper’s Mindest

Steve Horsman – Team Springfield’s Expert Prepper – has multiple guns in an assortment of calibers. But he does have a preference when carrying for self-defense. He likens the .45 ACP v 9mm debate to hunting.

Steve states that choosing a 9mm for self-defense, with the higher capacity, lighter kick, and lighter weight, is like him choosing to hunt elk with an AR-15 with a 30 round magazine. “No one in their right mind would ever use a .223 for elk hunting; they would more likely choose a .308 [minimum]-caliber rifle. Given the choice, I will pick the bigger bullet with more power every single time.” Magazine capacity alone cannot and will not substitute for power and accuracy.

From the LE Mindset

According to Team Springfield member and LE agent Kyle Schmidt, police officers are trained that there are four ways to “stop a threat”:

1 – Shots/damage to the skeletal system

3 – A hit/damage to the central nervous system

4 – Mental surrender (the threat gives up)

In Kyle’s decades of experience in law enforcement, caliber doesn’t matter much in 2 of the above circumstances, and the other 2 conditions favor .45 caliber. Kyle states, “The caliber doesn’t matter much with a direct hit to the brain or spinal cord, or when the threat surrenders (options 3 & 4). The larger caliber is definitely an advantage though when it comes to #1 – damage to the skeletal system and #2 – blood loss.”

Kyle, who is very [over-]analytical, also considers “power factor” when comparing the 9mm and .45 – but that’s another article entirely. Stay tuned…

Apple pie, baseball, bald eagles and the .45 ACP! This cartridge has a proven track record in America that dates back over a century. It was trusted by the United States through two world wars, and, while it’s use among the military and LE agencies has lessened more recently, it still serves a large role in many specialized units, as well as remaining a favorite of many civilians.

Supply of this cartridge should also be high. The .45 auto has been around for double-digit decades and while pricier than 9mm, the large quantities in which it’s produced make it easy to find.

Pick One and Practice

To summarize, in the great .45 ACP cs 9mm debate, both are great self-defense rounds. Though a 9mm pistol will hold more rounds, the .45 ACP definitely packs more of a punch.

So as with most things firearms-related – pick your preference: heavier and more powerful cartridges with more recoil OR a caliber that allows for greater capacity, less recoil and a lower cost to shoot.

And as you read above, even our Team Springfield SMEs don’t agree on the .45 vs. 9mm caliber argument… but they do agree on this:

Whichever caliber you choose, put some rounds downrange, shoot a lot of them actually, and make sure you train on a regular basis. Become proficient with your caliber of choice, because that is the best way to maximize the effect of any firearm that you carry for self-defense. 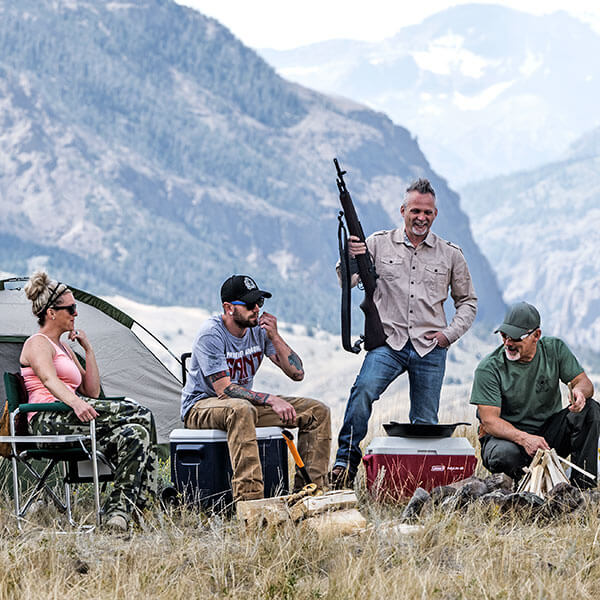 With an unmatched emphasis on craftsmanship, performance and exceptional customer service, our mission is to forge superior firearms and provide the tools necessary to defend individual freedoms and equality for those who embrace the rights and principles secured by our Founding Fathers.