We here at The Armory Life appreciate finely crafted firearms as well as gunsmiths with an artisan’s touch, so we jumped at the chance to interview Jason Burton of Heirloom Precision. Anyone familiar with the custom 1911 world is surely aware of Heirloom Precision and its reputation for stellar quality, so we wanted to take this opportunity to learn more about Mr. Burton and his company.

We would like to thank Mr. Burton for taking the time to do this Q&A session with The Armory Life.

The Armory Life (TAL): Why don’t we start by you telling us a little bit about yourself as well as Heirloom Precision, for any of our readers who might not be familiar with your work.

Jason Burton (JB): Thanks for allowing me to be a part of this! I’m a life-long gun guy. I was brought up around guns and was fortunate to be exposed to various types of guns throughout my youth. As I got older and more involved in shooting, I “discovered” — or maybe, re-discovered — the 1911. I eventually got to have my ever-growing passion for the 1911 transcend into what is my work and my company, Heirloom Precision. I have been making my living building custom 1911s for the past 16 years, and my main focus — as it has always been — is to build only the best bespoke 1911s I can. I’m lucky to have a client base that allows me to create the guns that I do.

TAL: What drew you to the firearms world? Did you grow up around guns, or did you seek this out on your own?

JB: My father was certainly my first influence in regards to firearms. He was very mechanically inclined, and I think (as with many gun guys) that in part drew him to guns. I got my first exposure to guns as early as four or five years old, and I quickly developed that same fascination with the mechanical aspect of guns.

I can remember the first time I shot a 1911, a Sharps rifle, an AR-15, a Winchester levergun, and thinking how cool all these gun were. Even at an early age, I can remember how rewarding it was to make a hard shot — or at least what I thought was a hard shot — and being brought up around guns allowed me to not only see a bunch of cool guns but also to shape my perspective on what they were for and how they could be used.

When I turned 21, I immediately got my concealed pistol license. Although I had chosen a carry gun that by the numbers seemed perfect, it didn’t take long for me to realize that I had a lot to figure out when it came to actually carrying the gun on a day-to-day basis. So, as I began to look for other methods of carry and other carry guns, I landed back with the 1911 and realized that not only was the gun easy to carry but it had all the most desirable attributes when it came to actually shooting the gun. Even though I didn’t know it at the time, that point was when I really became infatuated with the platform and was the first true step toward eventually building them for a career.

TAL: How did Heirloom Precision come about?

JB: I think like with a lot of careers, people often take a step without knowing exactly where it will lead. I was the same way. I knew I wanted to work on 1911s and just generally be involved with them, and in 2005 I got to take the first big step towards building custom 1911s when I got an offer to move to Arizona and manage a (now defunct) custom shop. I had already been tinkering with the 1911 for a few years before that, but moving to Arizona in late-2005 and getting the chance to really dive into the industry was the real first step.

TAL: What is the “signature philosophy” of the company?

JB: I’m driven by a constant quest to build the best guns I can, and nothing less. Right before I moved to Arizona, I remember a friend asking me what I wanted to do and my reply was simple, “I want to build a perfect 1911”. Now, I’m not sure I have done that yet (or anyone else for that matter), but that’s always been my goal and it constantly drives me to improve, to know more, to be better.

TAL: Who is the typical customer of Heirloom Precision (if there is one), and why?

JB: Obviously, it’s people who are in love with the 1911 platform. But I think moreover they are also people who enjoy the mechanical aspect of the design and the craftsmanship involved in building guns at a high level. My clients all seem to share the same passion with what can be done to both customize the 1911 and also what the gun can do from a shooting standpoint.

TAL: What should a customer of yours expect from a gun they get from you?

JB: In addition to building each client an exceptional gun, what I also strive to provide is an excellent customer service experience. The people who come to me are true enthusiasts for the 1911, and there is a shared pride of ownership between the clients who commission my guns and myself as a builder. The experience of having something custom crafted individually for each client is as important to me as the guns themselves because the realities of my business are that no one really “needs” what I do. There are so many great production 1911s out there now that my guns are really “want” items that are built in part because they can be. At the same time, the guns must be simply excellent and each client should expect exactly that from a gun that leaves my bench.

My work now speaks more to this than it ever has. Being a bespoke builder, I’m able to tailor each gun to the client’s desires. Oftentimes, a client has an overall idea for the theme of the gun they want me to build. Other times, the client chooses a few options and sets me free to do the rest. The process overall really is a collaborative effort.

JB: I can remember my first impression of the gun was how it was carried; cocked and locked. The single-action trigger and thumb safety were two major points of interest early on for me. I was drawn to the efficiency of the trigger, and the overall appeal is how effective the 1911 platform is.

From a mechanical standpoint, the gun is pure genius. This is something that is proven over and over again with how adaptable the gun is to all manner of shooting. When it comes to semi-auto pistols, there is nothing like the 1911. No matter how many other guns have been fielded and developed over the years, they are all constantly judged by how they measure up to the 1911. The gun simply has staying power like nothing before or after it.

TAL: Do you work much with Springfield Armory guns? If so, which ones, and why do you like them?

JB: I do indeed. I like to build on guns that I would describe as a “blank canvas,” and the Mil-Spec line of guns as well as some of the ones with railed frames are excellent to work with. In fact, when it comes to railed-framed 1911s, I think the Springfield layout is the standard by which to judge all others.

TAL: Where do you see Heirloom Precision five years from now? Or 10? Or more?

JB: I’ll do this for as long as I can. I hope that my desire to constantly build better and best my previous work allows me to look back in 10 years and know that I am doing even better work than I was today.

At the same time, I’m still relatively young, and 20 years ago I never thought I’d be doing this work today. I think as long as I can stay involved with the 1911 I’ll be happy.

TAL: Mr. Burton, thank you again for taking the time to do this interview with us. We appreciate the opportunity.

JB: It was my pleasure.

To learn more about Heirloom Precision, click the link below to their site. 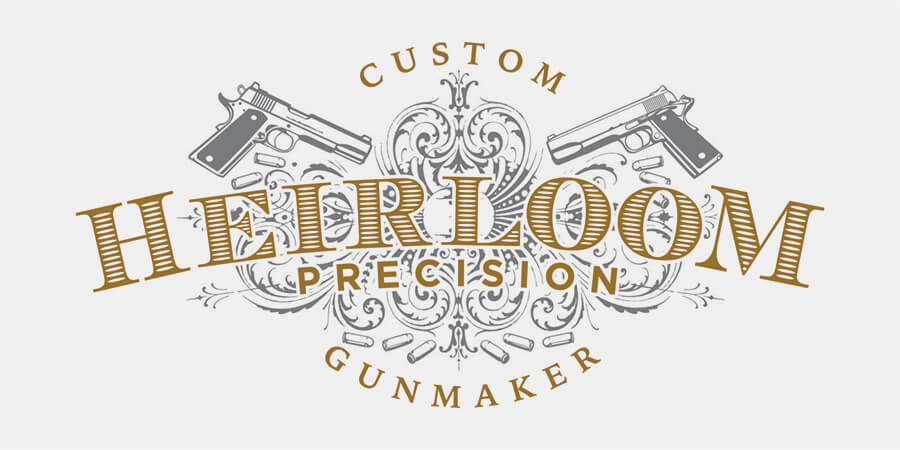