Range Time with the SAINT Victor .308

When Eugene Stoner set out to create his masterpiece, I bet he never could have imagined the popularity and modularity that would eventually come of it. The AR-15 has become one of the most popular rifles in the world, and most certainly America. The Springfield SAINT Victor .308 is a perfect example of what a modern AR can be.

An interesting fact for those of you who may not know — Eugene Stoner’s original design for the AR was chambered in 7.62x51mm/.308 Win. (Make sure to read our article on the 7.62×51 vs 308). It was first submitted to the Army’s rifle evaluation trials in 1956 and performed quite well, but it arrived late in the program and was rejected in favor of what would become the M14.

At the request of the U.S. military, this 7.62 AR was later redesigned and chambered in what would become the 5.56 NATO/.223 Remington (There is a difference between the cartridges. Know which you can shoot in this .223 vs 5.56 article.) and became the M16/AR-15 we know today. A revolutionary firearm that employed radically modern materials, the new rifle and round were adopted in the 1960s and is still used today as the M4 Carbine.

Why was Stoner’s design so different and exciting? He refined the direct gas impingement process in which gas is tapped from the bore and run back through a hollow tube to impact the bolt carrier group’s (BCG) gas key. This drives the BCG rearward to cycle the action, resulting in a very accurate rifle with a minimum of bulk and mass slapping back and forth — albeit one that can get dirty very quickly.

Most rifles at the time used some form of a piston system that was pushed rearward by gas tapped from the bore. While extremely reliable, piston systems could be heavier and bulkier, resulting in potentially reduced accuracy and increased recoil.

For those not familiar with the cycle of operation of the AR platform, it is quite ingenious in its simplicity. As the hammer impacts the firing pin to strike the primer and ignites the powder, a bullet travels down the barrel. As the projectile passes the gas block, some of the gas vents upward and through the gas tube that leads directly back to the BCG. These gases from the round then push the bolt carrier back against a weighted buffer and spring located inside the receiver extension. The buffer spring then pushes the buffer and BCG back into battery, picking up another round to repeat the cycle.

This process reminds me a bit of the auto racing world where a turbocharger uses the vehicle’s exhaust to spin a turbine, forcing more air into the engine to create more power. Brilliant.

The AR is one of the most successful designs in modern firearms history. More than half a century later, we are still using that same platform, from civilian in semi-automatic form to select-fire in military use. Its performance and modularity make it the go-to rifle for many.

Looking Back, and Forward

If Stoner were still alive today, I think he would be very proud of what Springfield has done with his original design. The SAINT Victor .308 weighs in at a mere 7.8 lbs. while sporting a full 16” lightweight profile barrel. That is .30-caliber firepower at the weight of a full-figured 5.56 rifle.

The SAINT Victor .308 features forged 7075 T6 aluminum, Type III hardcoat anodized upper and lower receivers, which reduce weight while retaining strength and durability. Equipped with the Accu-Tight system, the rifle allows the user a means to reduce movement between the upper and lower receiver for increased accuracy. Adding to that, the 15” aluminum M-Lok wrapped handguard allows the user unlimited choices to mount their favorite accessories.

The 16” lightweight profile barrel is Melonite-coated inside and out and features a 1:10″ twist. The mid-length gas system comes with a pinned gas block for superior reliability. Taming the recoil of the higher power round is Springfield’s proprietary muzzle brake which makes quick follow-up shots a breeze. Paying close attention to what consumers ask for, Springfield kept with the tried-and-true nickel boron-coated fire control group and flat, single-stage, smooth 6-lb. trigger for exceptional accuracy. Rounding out the rifle is a BCMGunfighter Mod 0 stock, and BCM Mod 3 pistol grip.

An interesting thing to note about the 7.62 AR platform is that there is no standardized design or “mil-spec” to follow. Therefore, oftentimes parts from different manufacturers don’t play well together. This is a departure from the AR-15 which can be like adult Legos, giving you a design where building from parts is a breeze. Being as such, finding a quality, complete 7.62 AR from a manufacturer is paramount. Springfield Armory took the task in stride and created one of the finest 7.62 ARs on the market.

When you compare .308 to 5.56, it’s almost surprising the military adopted the smaller caliber for the main infantry round. Sure, it’s lighter in weight with a higher magazine capacity, but the power potential of the .308 round is something to behold. A typical .223 bullet is usually between 55 and 77 grains, whereas a .308 bullet is generally between 125 and 220 grains. That’s a lot more mass moving downrange.

If you’re familiar with an AR-15, then you will be right at home with this 7.62 AR. The manual of arms is identical. The major difference is the satisfying bump you get from firing the larger round. One might think that the larger .308 caliber that is often used in hunting or precision rifles would be a chore to control in a semi-automatic platform, but the SAINT Victor .308 features such a wonderfully designed system that it absorbs a ton of energy through the bolt and buffer system.

Shooting the SAINT Victor .308 is a truly a joy. From stopping power to range, the .308 outperforms the .223 by a good margin. Even just ringing steel at the range, the satisfying ping and the rocking steel makes you feel the power of the .308. I love that I can have a SAINT Victor in .223 and .308, and going back and forth between them is seamless. For my SAINT Victor AR-15, I usually run a red dot for fast sight acquisition 100 yards and in. With the 7.62 AR, I prefer a LPVO or low power variable optic, ideally a 1-8X or 1-10X so that I can easily reach out to 400 yards.

The 7.62 AR is widely used in the United States military as the SR25/M110 Designated Marksman Rifle. Prior to the adoption of the 7.62 AR, marksmen using the same .308 round had thee to five shots in a bolt-action rifle. If they were at risk of being overrun or needed to quickly engage multiple enemies, they would be hard pressed to do that with a bolt-gun. With a 7.62 AR, they have very similar accuracy capability to a bolt-action while having a semi-automatic, 20-round marksman’s rifle. Talk about a game changer for our troops.

It could be argued that if you were to own one rifle, it should be a 7.62 AR. The .308 round has been around for a very long time, and because of that, the cost is reasonable for a box of ammo. The .308 round is more than capable of bringing down most North American big game, and it shares ammo with some of the most popular bolt-action guns on the market. From a defensive scenario, the .308 round is extremely capable and powerful. Last but not least and mentioned earlier, it shares the same manual of arms and operation as the most popular rifle in the world, the AR-15.

In my experiences with the SAINT Victor .308 with a wide range of ammunition, weather conditions and distances, I learned you can always count on that round going downrange where you want it. The lightweight design makes its handling nearly identical to most of my AR-15 load outs. Besides the magazines, all of my accessories from my other AR builds work perfectly on the 7.62 AR.

I can’t stress enough the benefit of a lightweight, agile .308 firearm.  From a full day of training at the range or a hunting trip, the rifle acts more of an extension of you rather than simply a burden to carry. Compare the SAINT Victor .308 at just under 8 lbs. to a typical .308 bolt-gun around 9 lbs., and you can start seeing how effective a hunting tool the SAINT victor .308 can be.

The SAINT series of Springfield Armory rifles are 100% made in the United States by hard-working patriots making some of the finest firearms on the market. From hunting to plinking all the way to defensive situations, the SAINT Victor .308 is designed to perform every time.

Springfield Armory offers the SAINT line-up in three versions. The “entry level” is the SAINT chambered in 5.56 — but there is very little about this rifle that says “entry level”. Springfield gives you a BCM or B5 Systems grip, stock and handguard, flip-up iron sights and forged receivers with Accu-Tite tensioning systems. And you get all this with an MSRP of under $1,000.

Moving to the next level offering, we come to the SAINT Victor. Building upon the quality standards of the SAINT, Springfield adds a 15” free floating M-Lok handguard, BCM or B5 Systems options for the grip and stock as well as color offerings in black, tactical grey, FDE and OD green. In addition, they went with the ever-popular flat trigger and attached a proprietary Springfield Armory muzzle break. The SAINT Victor is offered in 5.56, .308, .300 BLK and .350 Legend.

For the serious user who wants an edge in performance comes the SAINT Edge rifle. One of the most notable features is the machined billet lower receiver. It sports a flared magazine well for easier reloads, ambidextrous safety, integrated QD mount and enlarged trigger guard for gloved hands. The lightweight-profile 16” barrel has a Springfield proprietary high-performance muzzle brake, pinned adjustable gas block and modular match short reset single-stage trigger. The SAINT Edge is offered in 5.56.

So there you have it, a SAINT for just about any need. And with the SAINT Victor in .308, you have what I think is just about the perfect all-around AR. Featuring familiar controls, a proven design and the unstoppable power of the .308 round, this Victor is definitely purpose-built for performance! 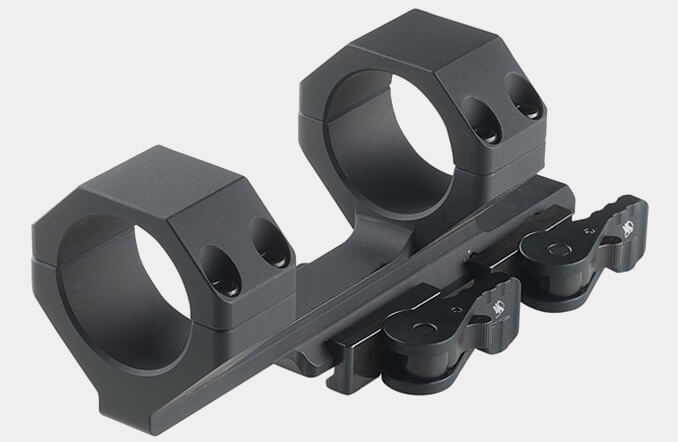 How Do I Work My New AR?