In our age of modernity, wood-clad rifles are sometimes overlooked. In many cases, the high-speed low-drag designs that originated from the mind of Eugene Stoner have become America’s rifle. Lightweight, soft recoiling and possessing the ability to mount everything including the kitchen sink, it’s no wonder the AR has become a popular choice of rifle among American civilians.

However, for those hairy-chested stewards of the vintage rifle, there is no replacement for the might of the 7.62 NATO round in the Springfield Armory M1A.

This article is my Springfield M1A Loaded review – a look at one of those wood-clad beasts that hit hard and harken back to the clear-eyed days of a younger America.

The M1A is the civilian version of the M14, which served as the United States rifle from 1959 until replaced by the M16 in the late 1960s. The platform would go on to be used in marksman units throughout the rest of the 20th century.

In fact, the M14 rifle is still used today. A good friend of mine was a sniper in the 1st Infantry Division and deployed with the M14 in 2011 to Afghanistan, roughly 50 years after the rifle was introduced to the U.S. Army.

The recoil isn’t unmanageable, especially considering the heft, but it is slightly sharper than other 7.62 NATO rifles, such as the FAL. With that being said, the weight and balance of the rifle is incredible, and the gun shoulders like it is an extension of your body. For all of you Garand shooters, this gun will feel like a pair of broken-in cowboy boots when you bring it up to your line of sight.

The gun ships with a 10-round magazine, which is nice for bench shooting. M1As use a “rock n’ lock” magazine system which makes all the “tacticool” operators cringe, but isn’t an issue with some practice. You simply rock in the mag with the front inserted first, and the magazine rocked back to lock into place.

I had a 20-round magazine lying around, which I aesthetically prefer as well as it being much easier to seat properly. A 20-rounder also gives the gun that Vietnam-era vibe. Which brings me to this point: if you don’t play Creedence Clearwater Revival while at the range with the M1A at least once, you’re doing it wrong.

The front post on the M1A is a clean 0.062″ National Match blade, matched with a 0.0520″ aperture with half M.O.A. windage adjustments, and one M.O.A. elevation increments in the rear. Basically, this results in a cleaner and finer sight picture for longer distances using iron sights.

Especially with longer distance shooting, the trigger is rather important. Springfield has incorporated a predictable 4½ lb. two-stage trigger into the Loaded’s features. I found this trigger to be greatly consistent as well as having a tactile reset. The safety is housed in the gun’s trigger guard, so one must enter the trigger guard to manipulate the safety.

The heart of accuracy on the M1A Loaded is an exceptional medium-weight, air-gauged National Match barrel with a twist of 1:11. The medium weight is exceptional in providing match-accuracy as well as maneuvering the gun quickly.

The only addition I would have enjoyed seeing on this rifle is absolutely personal preference. As an admirer of antiquity, I would have loved seeing Springfield include a traditional flash hider that accepts a bayonet.

Now, do I need a bayonet on a “target rifle”? Some would say no, but the addition of that bayonet mount reminds you of this rifle’s association with the M14. Like my grandpaw always said, “it’s better to have it and not need it, than need it and not have it.”

Back to Its Roots

While the M1A is accurate, it’s operating system (also coupled with a lacking experience shooting from the bench on my part) can be a hindrance to accuracy without being finely tuned. However, the gun is more than capable of good accuracy and, while the M14 family of rifles may be used in the DMR or sniper role today, that wasn’t the gun’s original purpose.

When shouldered, the M1A feels incredibly natural. Bringing this rifle into firing position is like hugging your girlfriend, only with more excitement. The lighter trigger in the Loaded model transforms the firing of the M1A from “slow precision” into “accuracy by volume” (I mean, it’s great for more surgical work at distance, but nothing beats ripping off a few rounds with the M1A at closer range!).

As I progressed through my journey of becoming poor via gun addiction, I constantly heard tales of the difficulty of using an M1A scoped. The weak link seemed to be in the mounting system for the M1A. The way the rifle is built definitely favors iron-sight use; however, with the new 4th Generation aluminum mount from Springfield Armory, I found it to be easy and effective. (To learn how to mount a scope on the M1A, click here). After every range trip, I checked the mount to see if it had worked loose. There were no weaknesses to report.

For the optic, I was generously sent the new Vortex Strike Eagle FFP (First Focal Plane) 5-25x56mm scope. This scope came in MRAD flavor, a personal preference of mine. The Strike Eagle EBR-7C at first really intimidated me as I am a novice distance shooter.

Never one to back away from a new learning experience, I researched how to use the reticles, and after a few months behind the EBR-7C, I can say with confidence that I will probably never turn back to a simple reticle.

I am able to do windage and elevation holdovers all from the reticle view without touching my turrets. This made shot corrections a breeze, and was very helpful for more fast-paced shooting with the M1A. Of course, if I did want to dial for windage, I am given that ability through not only exposed locking turrets, but a very nice zero-stop on the elevation as well.

Glass quality is fantastic, and the build quality is typical Vortex heft, weighing in at 30.4 oz. per Vortex’s website.

I will be the first to admit that I am not an experienced distance shooter. Most of my shooting, even at a young age, has been with handguns and carbines inside of 100 yards.

With that excuse out of the way, I shot the Springfield M1A Loaded in this review with the Vortex Strike Eagle 5-25 at 100 yards using four different varieties of Black Hills Ammunition:

I’ll cut to the chase: the M1A Loaded accuracy was excellent. My groupings with the M1A Loaded were sub-2 MOA at 100 yards. An M1A that has been bedded and tuned further can tighten these up even more.

The most accurate ammunition for the M1A was the 152-gr. Dual Performance, which clocked in close to 1.25 MOA group at 100 yards on a very hot day. Both 175-gr. bullets shot 1.5 MOA very constantly. However, I had very little luck with the 125-gr. Hornady GMX, usually coming in just over 2 MOA.

After the static range, the M1A came to life when out in the field. I would even categorize shooting this gun at steel as addictive. I spent a day shooting a ⅔ IDPA steel target between 200 and 300 yards (long distance for those of us in western North Carolina) from a backpack, standing, kneeling and sitting, with perfect performance from the M1A. Much of the 300-yard shooting had to push through thick brush, and the power of the .308 as well as the amazing clarity of the Vortex Strike Eagle really showed.

Whatever the loading, the M1A never failed to make a hard impact on steel (as long as I was doing my part). We had planned on shooting over 500 yards that day, but the spot where we shoot distance from had become overgrown and the line of sight to our targets was obscured by dense foliage.

Since its development in the late ’50s, the M14 has been a symbol of America. From the jungles of Vietnam to Hollywood screens in Black Hawk Down, the M14 continues to be a staple small arm in the Arsenal of America.

The age of wood-stocked rifles may be dying, but the M1A isn’t going down without a fight. The M1A lives on as a symbol of American craftsmanship and pride. 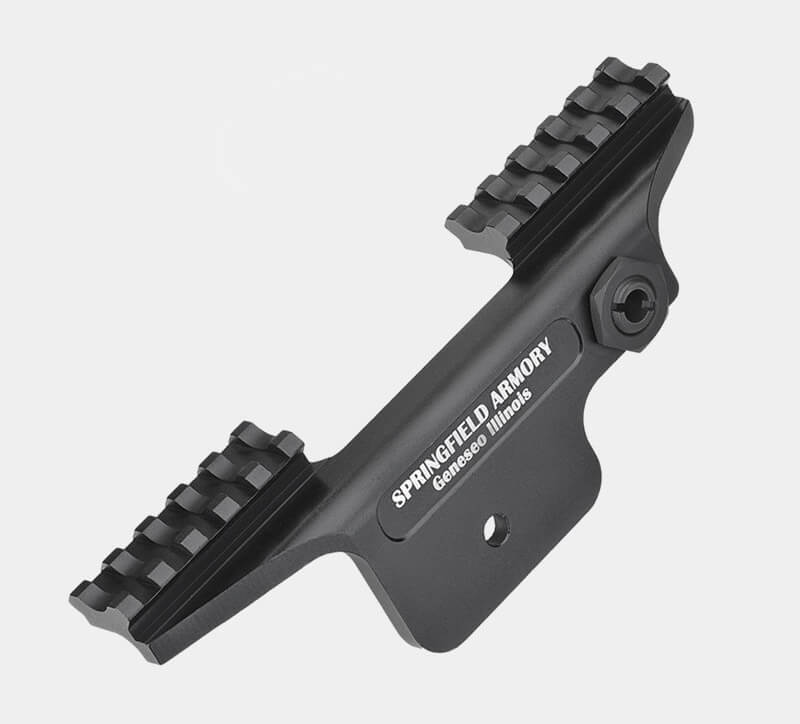 Going Armageddon with the M1A